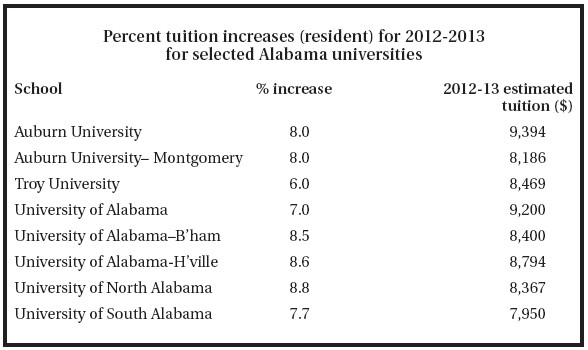 Do you realize how high costs of attending college have gotten? Do you know how fast they’re continuing to rise?

The charts that follow show resident tuition costs at several levels of public higher education in Alabama. They show total estimated costs based on published figures for the various institutions, and provide a basis for comparing the cost of a bachelor’s degree at the various levels, or combinations of levels – such as two years at a community college plus two years at a large university, compared to four years at a large university, for example. Source for much of the tuition and room and board information is Getting In – Guide to Alabama Higher Education, 11th (2007-08) and 15th (2011-12) editions – supplemented by individual school websites. 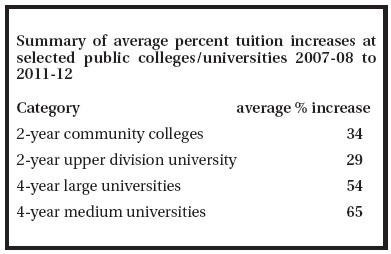 The charts also show tuition percentage increases at various levels over the last five school years, and report percent tuition increases for 2012-13 that have been announced and that we could find, so far this year. The list of 2012-13 increases we report is not complete, but illustrative. Finally, we report the tuition costs of taking a single three-hour course at selected institutions.

The point these figures make is not new. College costs are increasing at a rate far exceeding inflation, salaries/wages of employed workers, and increase in prices for other products and services generally. They are climbing so high and increasing so fast that lower- and even middle-income people may be priced out of all hope of higher education, even on a course-at-a-time basis at larger institutions. 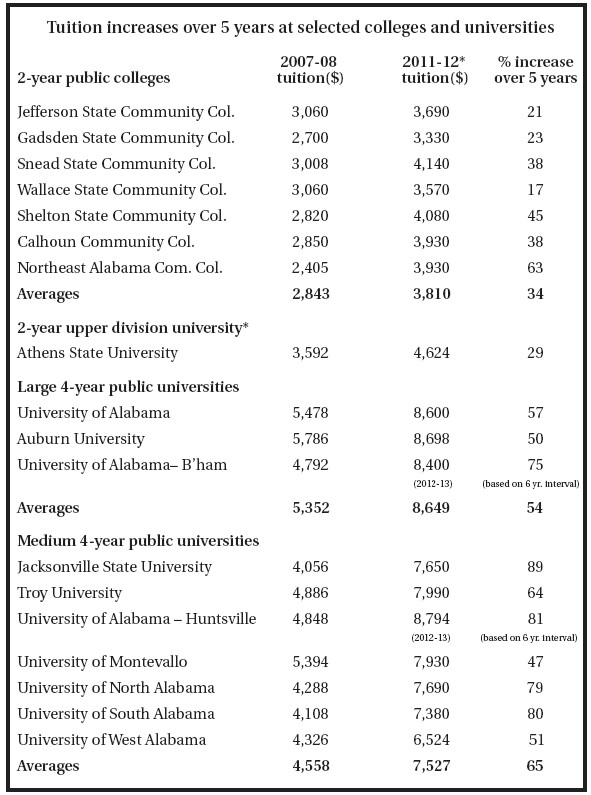 One conclusion jumps out from the charts. It’s noted here without further discussion of whys, wherefores, or merits: It appears that by far the most efficient model for getting a bachelor’s degree is to attend two years at a community college, then transfer to the state’s only upper division college – Athens State University – for the final two years. Cost is far less than half of attending a large university for four years, only a little more than half the cost of attending a medium four-year college for four years, and $10,000 to $20,000 less than either of the other two transfer options. Something to consider if you’re on a shoestring budget. 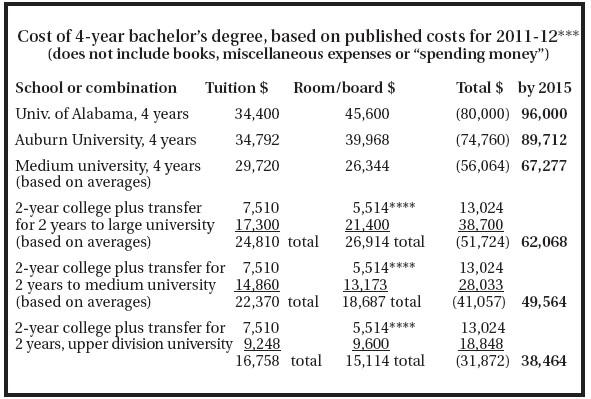 Special note: In an accompanying article (The Closing College Door), Wayne Flynt, Distinguished University Professor Emeritus, with an extensive history of involvement with Alabama history and education, including a 40- year plus teaching career at Samford and Auburn, provides a personal perspective on causes and consequences of the decade-long-plus spiral of college costs. His reflections, written for The Blount Countian, fill in the human dimensions of the problem in a way mere numbers cannot. Don’t miss it. 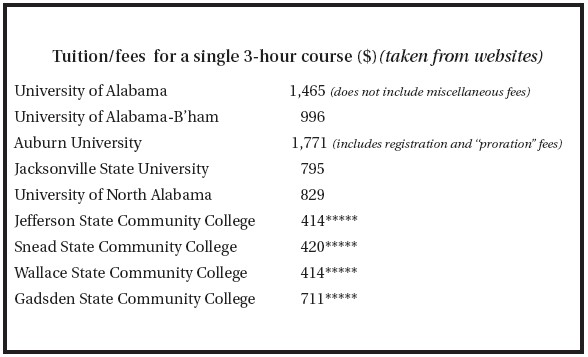 He doesn’t say it, but tuition costs have doubled or more than doubled in many Alabama institutions since 2000. It’s approaching the point where “holding the line” on tuition is not sufficient. A public outcry is needed to actually ROLL BACK tuition and other costs for a time – especially among the most egregious offenders – to return public higher education to the realm of hope for citizens in non-affluent income categories.

If this resonates with you, express your opinion where it counts. Mere agreement won’t get the job done. It will take a public uproar to remind those in charge – politically and administratively – of their duty to restore higher education accessibility to all Alabamians, including those less-than-affluent ones.

Full disclosure: The writer of this article is a lower-middle income wage-earner with two children in college: one in the third year and one about to graduate, thanks only to both getting substantial scholarships covering more than half of the costs of attending. * Many Alabama colleges and universities have announced tuition increases in the 5-10 percent range to take effect this fall for the 2012-13 school year. Tuition costs shown do not reflect this most recent round of increases since they have not yet been published by the schools. See separate chart for 2012-13 percent increases and total resulting tuition for selected schools. ** 2-year college providing only juniorand senior-level courses; grants bachelor’s degrees only. Athens State University is Alabama’s only such university, operated as a part of the Alabama Community College System. ***The figures show how much a fouryear degree would cost if the present 2011-12 tuition and room/board rates remain the same for all four years. But they won’t. They’ll continue to rise, unless something intervenes to slow or stop them. The actual cost to last fall’s enrolling freshman will be in the neighborhood of 20 percent higher than the figure shown. If increases continue at the rate of the last five years, the figure shown in “by 2015” is the estimated amount a freshman who enrolled in 2011-12 can expect to pay for a four-year degree by the time he/she graduates in 2015. **** Not all community colleges provide housing and board; these costs are figured using the average of those in this area who do, though many to most spaces may be reserved for students on athletic scholarship. Most community college students commute from home. ***** tuition waived by 2-year public community colleges – but not by 4-year public univeresities, as far as we can determine – for senior adult students. Called the Senior Adult Scholarship Program, students must be 60 years old or older, be an Alabama resident, enroll for credit and meet normal admissions requirements. Tuition only is covered for fulltime or parttime students (not fees, books, etc.), and the program is restricted to a space-available basis.