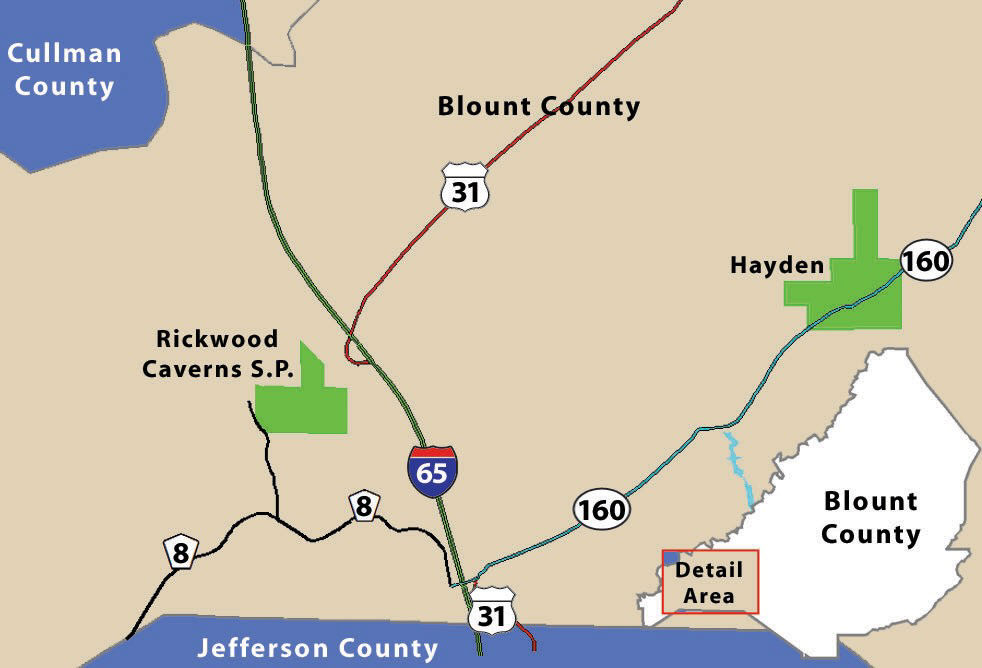 At the prospect of possibly scaling back facilities and/or closing several Alabama state parks, the Friends of Rickwood Caverns State Park has begun efforts to keep the park open. The information on possible cutbacks came at a meeting of the organization with state parks director Mark Easterwood. The state parks division is a part of the Alabama Department of Conservation and Natural Resources (ADCNR).

The 380-acre park is located in Blount County just west of I-65, off county road 8. Featuring a “miracle mile” of underground passages and cave formations, swimming pool, recreational vehicle campground, picnicking pavilions, and hiking trails, the little-known site has been in operation as a state park since 1974.

“We’re getting ready to have to make some serious adjustments of the kind that we haven’t had to make for many years with the state parks,” Easterwood said. He attributed the coming cutbacks to declining revenues.

He said only a few of the larger state parks are actually profitable, with a number of smaller parks operating at a loss annually. He said about 10 state parks are on a list to be considered for cutbacks, up to and perhaps including closing. Asked if Rickwood Caverns is on the list, Easterwood avoided the question the first time. Asked point blank a second time “Is Rickwood Caverns on that list?” Easterwood replied, “Yes.”

Explaining further, he said that not all, possibly not any, of the parks would be closed down completely. “We’re talking about eliminating some of the facilities and costs at these locations, not necessarily closing them down completely. But it is possible some could be closed,” he said. He added that Rickwood Caverns is “not as far in the red” as some of the other parks on the list.

“What can we do to get Rickwood off that list?” Friends acting president Welton Carter asked.

“Get the park’s revenue up,” Easterwood answered. “You’re not all that far from being in the black. Get some more people into the park, advertise, put up some signs, go to the schools and civic clubs, do what you have to do to increase attendance from the local area.”

Further discussion focussed on the status of a new recreational vehicle campground at Rickwood. Design work for a proposed state-of-the-art RV park was initiated by the state over a year ago, and has been completed by CDG Engineering of Andalusia.

New facilities could include 35 camping spaces, a bathhouse to serve the campground and a self-contained sewer system that would serve the entire park area. Cost of the planned expansion was estimated last year at $1.4 million. Completion of the campground could more than triple revenues from the present campground, which has only 13 spaces.

Would that provide enough additional revenue to put the park in the black and keep it from being closed? Thomas Dunlap was asked. Dunlap is the park division’s chief accountant and keeper of cost, revenue, and performance statistics.

Working at his calculator, Dunlap projected an increase in park revenues from the proposed campground sufficient to put the park beyond the breakeven point by approximately $18,000, after a year of operation. He also noted a healthy increase in the guest count from just over 54,000 in 2007 to 60,800 in ’08, an increase of about 12 percent.

“I don’t think it would be a problem to get that park at or near profitability with a new campground,” he said.

He said the market for new state-of-the-art campground facilities would bear re-pricing from $19 per campground space per night to $25 per space per night, thus contributing further to the revenue increase projected.

According to Tim Ramsden, CDG’s design engineer for the project, the plans are complete and ready for construction as soon as a variance request is granted by the state health department for the self-contained sewage system. Ramsden said he does not anticipate any problems with approval, but that it might take three to six months for it to work its way through the administrative process.

The problem, according to Easterwood, is that there is no capital money available to fund the project. All the bond money designated for state park construction has already been committed to other projects, he said. He had already stated that annual revenues from tax monies allocated to state parks were inadequate to fund annual maintenance needs.

Easterwood said that in similar circumstances, including at Lake Jackson State Park at Florala and at Meaher State Park on Mobile Bay, the state entered into agreements with local governments whereby the state parks division of the Department of Conservation and Natural Resources paid for materials for the projects and the local entities provided contract work and labor. (Ed. note: At Lake Jackson State Park, construction on a 10,500 sq. ft. $2.5 million meeting center with accompanying amphitheater was recently begun and at Meaher State Park, a new 56-space RV park has been completed. )

“We’re not going to sit here and do nothing while they decide to close the park,” said Friends of Rickwood’s Carter. “We’ve got several avenues open to us, and we’re going to pursue them all. It’s a little early to report on progress yet, but we’ll keep the public fully informed as soon as we know exactly where we stand.”