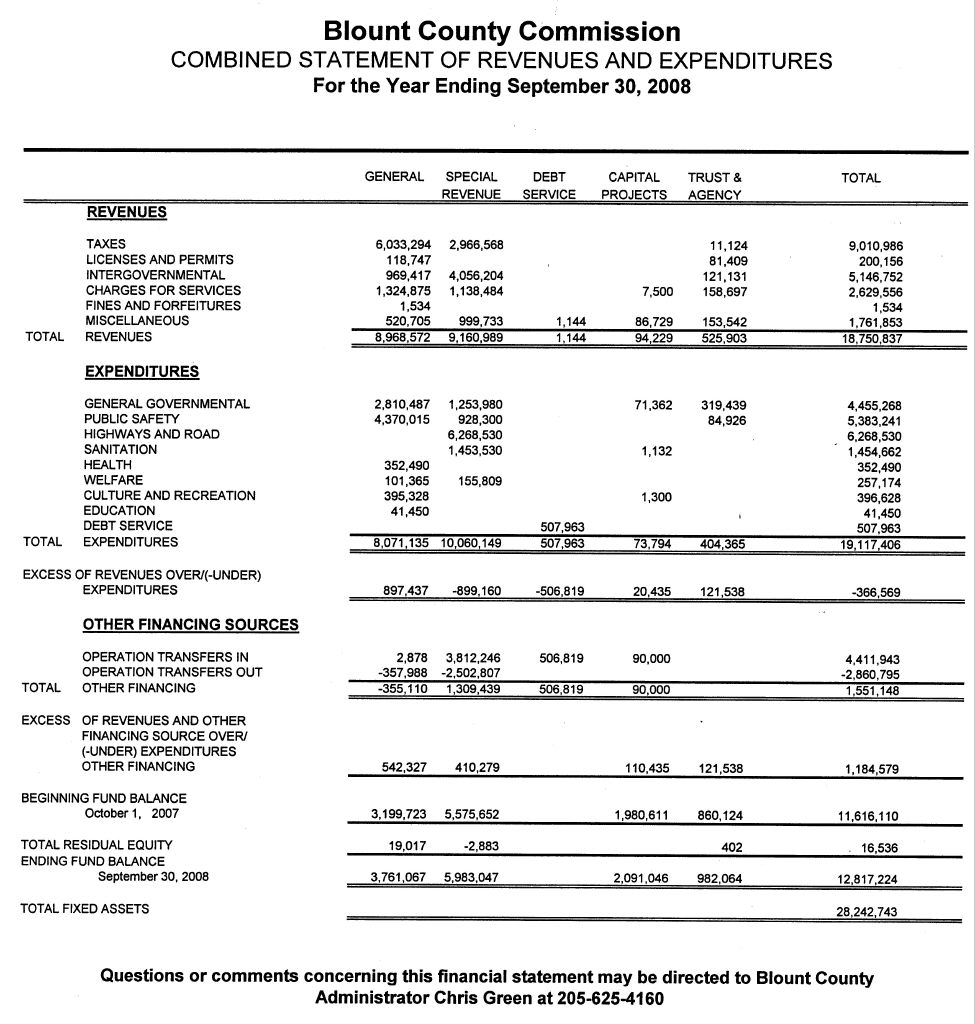 The charts to the right, top and bottom, are financial statements of the Blount County Commission, covering revenues, expenses, and debt for the year ending Sept. 30, 2008. State law requires these statements to be published as public information each year. Notes to those reports appear immediately following this paragraph and should help readers understand it. In addition, selected data from previous years’ statements is provided below to help readers be aware of trends over the period 2001 to 2008. Brief comments are provided on that data below the chart.

1 General: major revenues/expenses related to overall county operation, not including expenses of road repair and maintenance covered by county commissioners’ district budgets. The 8.7 percent expenditure increases in general government and public safety (combined) were due to rising employee benefits costs. 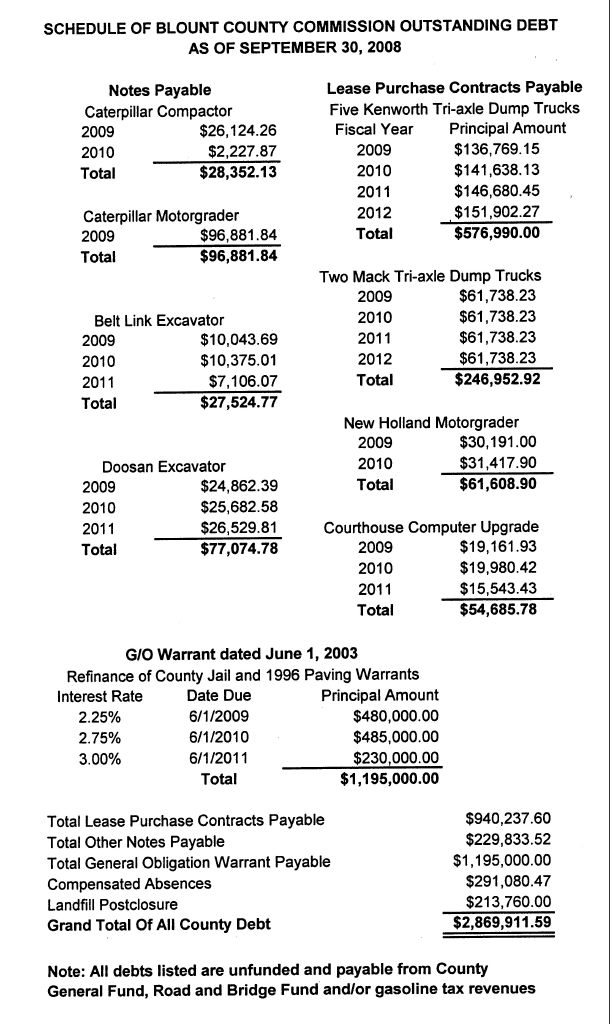 2 Special Revenue: revenues collected and designated to a single, specific purpose, such as tobacco tax monies used to fund school resource officers; the county’s prorata share of the state seven cents gas tax used to maintain roads; grant monies from the state; and other sources. 23 percent increase in expenditures over last year in highways and roads indicate sharp increases in cost of petroleum-based materials during 2008.


3 Capital Projects: specific improvement projects that have continuing value over time, such as a public water or sewer project. General governmental expenditures in this column are for establishing the Blount County economic development office and are accounted as a capital expense item.

4 Trust & Agency: monies that the commission holds “in trust” for other departments of government, such as monies from the state used to fund operation of the district attorney’s office, pistol permit fees held for remission to the sheriff’s department.

5 Other Financing Sources: borrowed money and permissible transfers of money from one account to another.

Outstanding Debt as of Sept. 30, 2008 (chart): noteworthy is that general obligation warrants dated June 1, 2003, pay out June 1, 2011, thus liquidating the county’s single largest debt category and freeing that annual payment amount to be used on road maintenance or other critical needs.

2. Total expenses increased in 2008 over 2007 by 13 percent, reflecting sharp increases in fuel and petroleum-based products costs.

3. Year-end balance increased by 10.8 percent over 2007. This figure includes nearly $3 million in reserve funds, sufficient to operate the county for about three months in the event of an extreme emergency such as a natural disaster or longer over a prolonged period of economic stress. If current economic conditions continue to deteriorate, it is likely this fund will be tapped as necessary to supplement waning tax revenues and to allow the county to continue to provide services on a routine basis until economic conditions stabilize.

5. Excess of revenue over expenditures generally indicates that county is living within its means. It is not expending more than it is taking in. Taken in concert with a moderate to low debt load, positive numbers over several years for this indicator signal a sound financial condition over time.

6. Total debt decreased by 5.4 percent in 2008, reflecting the effects of the annual payment on 2003 bonds refinancing the county jail construction and road paving program from the mid- 1990s. That obligation is scheduled to pay out in mid-2011, eliminating long-term debt, leaving only short term notes and lease-purchase debt, currently constituting about 41 percent of total debt. In comparative terms, this is a low debt load, compared to other counties in the state.