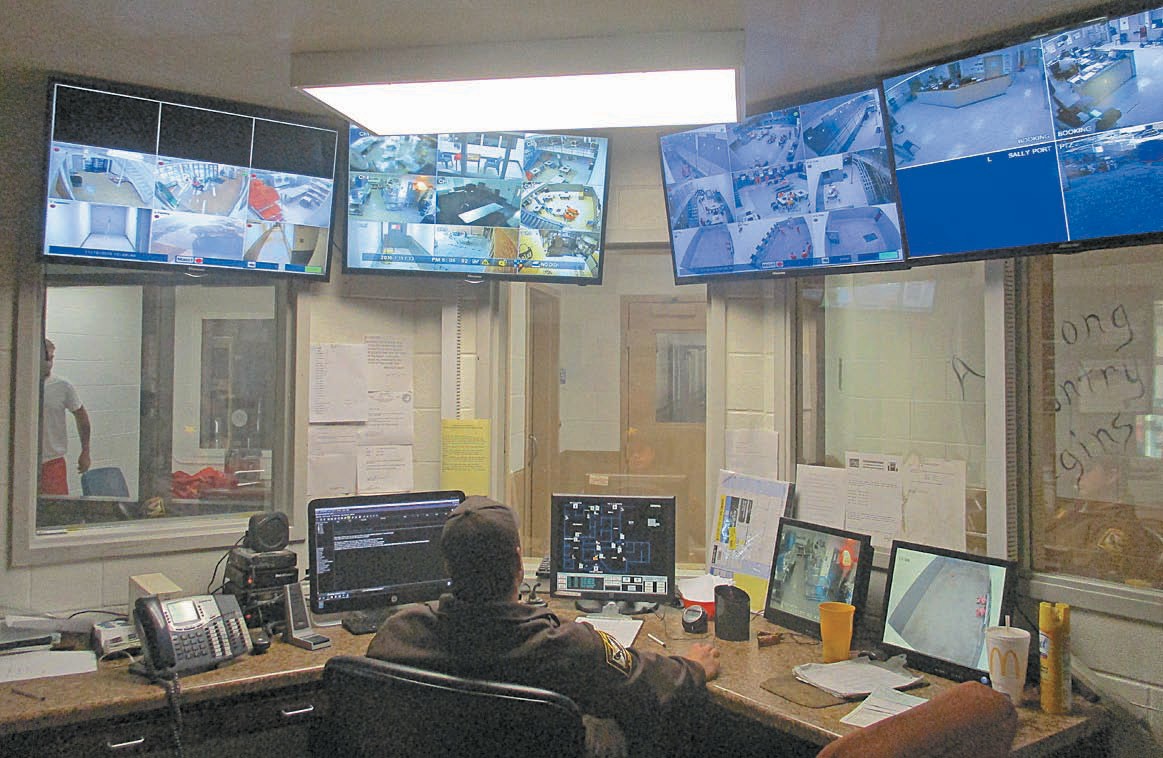 Surveillance command center where all cell blocks in the jail are monitored 24/7.

The escape of two prisoners from the Blount County Correctional Facility on Oct. 8 illuminated some previously unknown problems at the jail. The prisoners were able to cut a hole through their cell wall big enough to crawl through into the surrounding prison yard, then go over the chain link fence, defeating the roll of concertina wire at the top in the process. The two prisoners, one charged with murder and one a registered sex offender, were captured a short time later in the Locust Fork area.

In the aftermath, jail officials made a disconcerting discovery. Concrete blocks in the cell wall were supposed to have been augmented with iron rebar then poured solid with concrete when the jail was built. But they weren’t. They were just regular hollow concrete blocks. 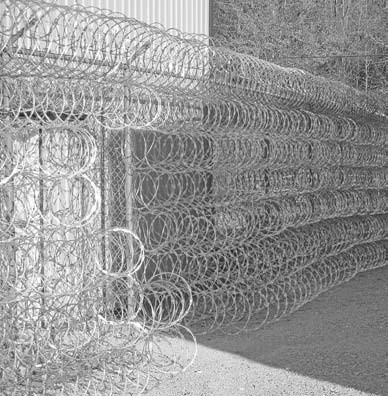 Officials concluded two remedies were necessary to protect the public: steel plates lining the outside-facing walls of the maximum security block cells and more concertina wire – three big rolls more – to prevent anyone from even getting close to, never mind climbing, the chain link fence that is the last barrier to escape.

Installation of the concertina wire is now complete. “You’ve now got as much razor wire protection as any maximum security facility in the state,” the installation contractor told jail warden Ronnie Mack Kent.

Two cells in the maximum security block have had outside-facing walls reinforced from floor to ceiling with 3/16- inch steel plate. Ten cells in that block remain to be reinforced, but a decision on that awaits a complete investigation into why specifications were not followed in the first place, and an engineering recommendation as to the best and most cost-effective way of remedying the problem of the non-solid concrete blocks.

So far, the price tag is roughly $43,000, but the meter is still running on how much money the final repair will require.

With the answer on hold as to how much more needs to be done to fully guarantee jail security, it seemed a good time to inquire into other facts and aspects of jail management. Accordingly The Blount Countian met with Blount County Sheriff Loyd Arrington, and Operations Officer Tim Kent to talk about needs at the jail.

The state of the jail

Why is that a problem? Because, according to Kent and Arrington, there aren’t enough officers to keep all bases covered at all times. For example, it’s not enough to keep two officers on each cell block at all times. It’s not enough to deal with situations where an officer must accompany a prisoner when he must answer a phone or attend to other imperatives – health related, visitation, exercise, or otherwise.

Here’s a quick example of the nature of the turnover situation.

“We had one new officer to work just four hours,” Kent said. “Then he quit and went home.”

“Several others just worked a day or two,” Arrington added.

Turnover makes training simply problematic, according to jail officials. “It can take four to six weeks to get new officers scheduled for the initial two-week training course,” Arrington said. “A lot of them don’t make it that long.” Follow-up training can take about six months to schedule. Same story only more so.

Why is turnover so high? “It’s not a highly-paid job ($11.25/hr.) and it’s the hardest job in the department,” Kent said. “It’s dangerous, they take a lot of abuse, they can have unbelievable things done to them – for example, urine and feces thrown on them.

“You just think about what you get when you’re keeping 140 or 150 inmates jammed into a jail built for 101. They’re after you all the time wanting you to do things for them – everything you can think of from wanting juice to drink to wanting medical attention for something very minor.

“A corrections officer can go out and get a job in town that pays as well or better and not put up with all they have to, and putting their lives in danger to boot,” Kent said. “Would you want to work in there under those conditions? It takes a special kind of person to handle it.”

Did he say jail capacity is 101 and they sometimes have 140 to 150 inmates? Right, 101 is the number provided for in jail design. There were 139 inmates present last Friday and 140 is the average population. It has gone as high 170 for a few days at a time, Arrington said.

How do they manage that? By placing two, three, even four inmates to a cell designed with one bed is common. Where do the extra bodies sleep? On thin mattresses on the floor in a 9-by-9 cell. “What else can you do?” Kent asks.

After being pushed for a comment on how long such a state of affairs can last, Arrington finally growls: “Sooner or later in the next few years, there’s going to have to be a new jail. The county can build it to county specifications based on the county budget, or they can wait and the federal government will build it for them to their specifications and send us the bill.”

Speaking of money, how much would it take to put the jail on a sound basis at the present facility, assuring adequate, but not in any way excessive or even ideal coverage of security needs and requirements?

The sheriff fielded that one, with some reluctance. “Ten more corrections officers,” he said. “That would give us two extra people per shift in the jail.” While we were on the subject, he added it would take 10 more patrol deputies to put the patrol division on the same reasonable, but no-frills, footing.

And how much would that cost, Sheriff? “About $75,000 on the average per patrol officer to pay them, train them, equip them, provide a vehicle for them and so on,” he finally said. And how much for corrections officers? “Probably $35,000 apiece for corrections officers, because you don’t have as much equipment, particularly a vehicle, to buy. That translates to two extra deputies per shift on patrol and two extra officers per shift at the jail,” he said.

Note to Blount County Commission: They’re probably not going to ask for anything close to that much come budget time. They’re team players, to their own detriment. But that’s what it would take to do the job right to manage law enforcement properly, without constantly having to borrow from Peter to pay Paul (suboptimizing) to keep the organization functioning to meet minimum standards of safety and security.

The sheriff and his operations officer didn’t want to include these figures – didn’t even want to provide them, until the questioning became insistent. “We’re realistic enough to know that the financial situation of the county prevents us from getting what we really need,” Arrington said. “There just isn’t money for it.”

But The Blount Countian thinks citizens ought to know. Citizens want absolute security at the jail, or the next nearest thing to it. And for years, they have wanted more officers on patrol in every section of the county. The population is increasing and crime along with it, according to the county’s leading law enforcement officials. That $1.1 million is what it would take now, without even considering the ticking clock on the need for a substantially larger jail.

• Random searches and inspections are done daily, every 30 minutes at night, and every 15 minutes in holding cells.

• Inmates in the medium security block are allowed out of cells at 7 a.m. for breakfast and return to their cells at 9 p.m. During the day, they all congregate in a sizable day room. Maximum security inmates remain in their cells except for a 1-hour exercise period each day.

• Jail officials consider the surveillance system inside the jail consisting of 19 cameras – covering all cell blocks and adjoining areas – to be adequate.

• Maintenance provided by a fulltime and two part-time maintenance employees is considered adequate, with no significant or persistent health or hygiene problems. “If we knew of any problems, we’d fix them,” Kent said.

• Most arrest warrants resulted in the offender being detained in the Blount County Jail for varying periods of time. On Monday, the day this article was completed, the jail inmate population was 143.