Remembrance of friends past 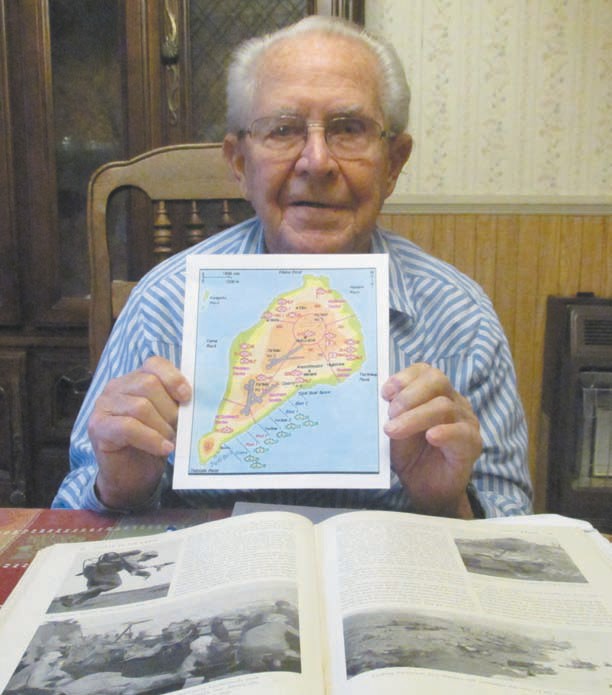 Horace Lee holds up a map of Iwo Jima, where his life and that of many others hung in the balance for 36 days in 1945. The invasion of the Japanese-held island began Feb. 19 – 71 years ago this Friday – setting off one of the most vicious battles of World War II. Lee asked The Blount Countian to do this article as a memorial to those who died there.

Horace Lee, 91, of Hayden was there on Iwo Jima, from the landing on Feb. 19, 1945, until it was declared pacified on March 26. He went ashore in the second wave of the invasion with other members of B Company, 5th Engineering Battalion, of the 5th U.S. Marine Division. 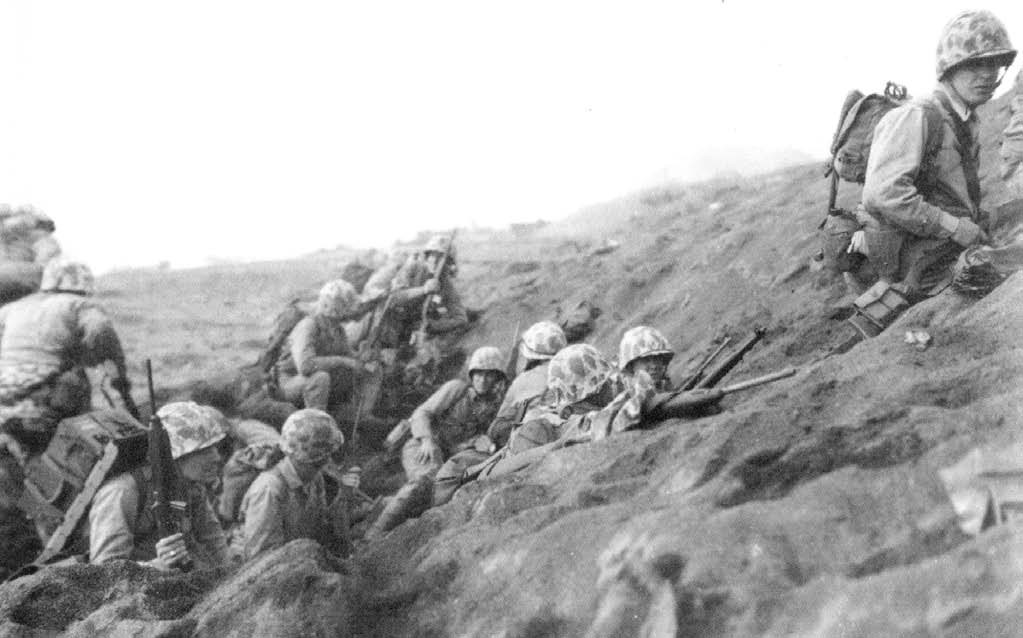 Marines hit the beach at Iwo Jima under blistering enemy fire. Here they are shown taking shelter beneath one of the three 20-foot high sandy terraces, left by a typhoon not long before the invasion.

“I want to tell this story in memory of the 50 percent of my outfit – the 10 men – who gave their lives for our freedom,” he said.

Lee was a staff sergeant directing the efforts of a demolition team charged with clearing mines, unexploded ordinance, and enemy pillboxes in advance of the oncoming infantry. His experiences included daily “pushes” inland to clear and seize Japanese airfields, pushes characterized by fierce fighting both in front of American forces, as well as ambushes from the rear as Japanese forces came up from underground tunnels and attacked from behind the American front. When the island was finally cleared, 8000 Americans had been killed with some 22,000 wounded.

Lee was seriously wounded on March 8 and spent several days in a Marine field hospital. During that time, Japanese guerrillas burrowed into the field hospital from those tunnels and decapitated three wounded soldiers in their sleep. Facing a wait of a few more days to be evacuated to a hospital ship, Lee, still suffering from multiple bullet wounds to his back and legs, told the doctor in charge of the hospital that he was walking back to the front. “It’s safer up there than it is here with people being killed in their sleep,” he said.

Asked how he coped with the constant threat of sudden death from enemy fire – and how he nerved himself to walk, still recovering from bullet wounds back to the front – Lee replied: “First, you can’t fight scared. You’ve got to have your mind completely on what you’re doing, or you won’t make it. Second, when we were going ashore, I said a prayer:‘Lord, I’m in your hands. Take care of me and help me fight this battle and win it.’ A day didn’t pass that I didn’t say that prayer, sometimes more than once.”

Following his return home in 1946, Lee went to work initially at TCI in Corcord. He later worked in gas pipeline construction, eventually becoming superintendent of the company. Finally, he worked at Pipefitting and Steamfitting in Birmingham, retiring in 1989. He married Patsy Thomas Lee of Hayden, and they have three children.

How he got from his birth home in Perry County to Blount County is quite a yarn, especially the part dealing with Patsy’s doctoring his milkshakes, according to Lee, in a cafe near ACIPCO with a magic potion that led to their marriage – and to their moving back to her hometown where they now live in rural peace and quiet. The only questionable part of the whole story concerns who doctored whose milkshakes!