Relax; black bears not invading county in numbers – yet 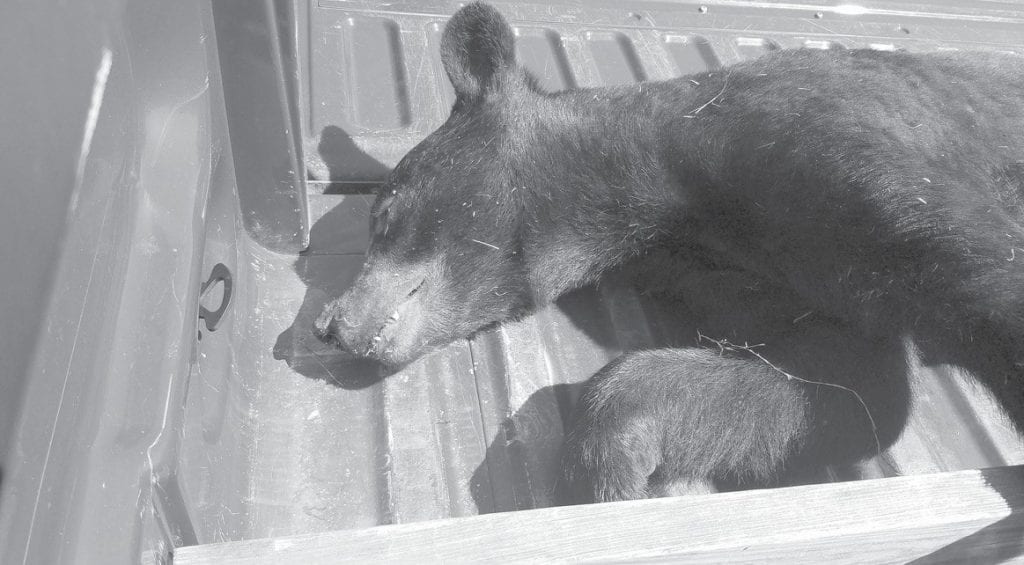 Small black bear killed a mile north of the Hayden/Corner interchange on I-65 on or about June 27 last year. There had been four reports of bear sightings in Blount County in 2017 at the time this bear was killed, but none were officially confirmed.

No black bear sightings have been reported so far this year in Blount County, according to Blount County Wildlife and Freshwater Fisheries Division conservation enforcement officer Toby Lucas.

The operative word in that sentence is “reported.” There have been at least one and perhaps two sightings in the county this year – one in the Straight Mountain area, posted with photos on Facebook and a second one rumored to have occurred elsewhere in the county, but unconfirmed by The Blount Countian. Apparently, neither was of sufficient concern to merit a report to the county’s game warden.

“In some years we might get one or two reports of bear sightings, but none so far this year,” Lucas said.

In fact, sightings have been reported in several counties in north Alabama this year, including Jackson, Limestone, Marshall, Morgan, and St. Clair, according to state wildlife officials and various media sources. State officials say sightings are likely to increase as young male bears are pushed out of their ranges in northwest Georgia and migrate south and west into northeast Alabama, where they are increasing in numbers and are finding suitable habitat to establish home ranges and expand the population.

“The bears are breeding (in northeast Alabama),” Dr. Todd Steury of Auburn University said earlier this year, as reported in Outdoor Alabama, the publication of the Alabama Department of Conservation and Natural Resources. Steury had just completed a multi-year study of black bear populations in Alabama.

“We have seen numerous examples of sows with two or three cubs on our game cameras. We feel like the population there is going to grow, and there are still bears coming in from Georgia. We’re going to have more bears up there. There is a lot of habitat in Jackson County and Talladega National Forest. It’s just a matter of time for the population to expand,” he said.

So what should you do if you come upon a bear while traipsin’ through the woods? Here’s what Marianne Hudson, conservation specialist for the Alabama Wildlife and Freshwater Fisheries Division, recommends. In the briefest of admonitions, Leave it alone! Other tips:

• Back away slowly while waving your arms and yelling.

• Make sure bear has an unobstructed path to escape.

• In the unlikely event of attack, fight back. Don’t play dead.

• Never approach or attempt to feed a bear.

To avoid attracting a bear to your property:

• Store all food indoors or in bear-resistant containers.

• Keep trash cans clean and don’t put outside until morning of pick up.

• Avoid feeding birds and other wildlife from April to January when bears are most active.