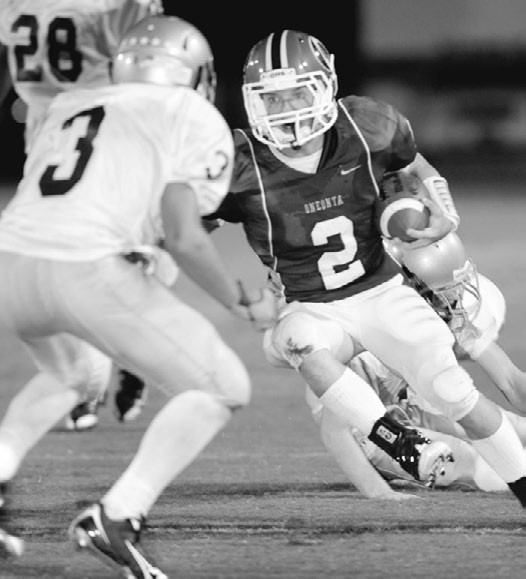 Every school in the county will face a region opponent this week and for some schools the game is almost a must-win when it comes to playoff hopes.

Each team has been impressive through the first two weeks of the season.

The Conquerors feature Arthur (A.T.) Thomas, possibly the most feared back in 1A Region 5. Thomas (5’10, 175, Sr) is capable of scoring from anywhere on the field – against any team it seems except Appalachian. The Eagles have bottled up the explosive runner the last couple of years and don’t think that Coosa head coach Teddy Helms hasn’t given that some thought this week. Coosa is thought to be a darkhorse in the region and needs to win this game to prove the point. The Coosa offense has been explosive this year thanks to Thomas and a key position change. Last year’s starting quarterback, Justin Langdale (5’11, 170 Sr), has been moved to receiver and Colby Helms (5’9, 160 So) has moved in at quarterback. The Coosa fronts are led by Jake Tate (5’10, 185 Jr) and Hayden Christopher (5’10, 230 So). The Coosa defense has been impressive so far but how good are the offenses the Conquerors have faced?

Appalachian splattered Jacksonville Christian last week. The Eagle defense never let the Thunder get any consistency established and the Eagle offense was effective on the ground and through the air. The Appalachian defense will now face the most dangerous offense it has seen, led by the speedy Thomas. Tackling will be the key this week in controlling Thomas but this Coosa offense is more diverse with Langdale at receiver and Helms the new starter at quarterback. There are playmakers other than Thomas on the team. Appalachian needs to test the Coosa defense early. Gaylesville made some plays early but managed just 146 total yards while Parkway last week could muster only 60 yards of offense. Thomas and the secondary have made plays but Gaylesville and Parkway didn’t do much to worry the Coosa defensive front. The Eagle offensive line should change that Friday night.

Cleveland gets a region favorite at home – Lamar County is still looking for some competition.

Lamar County has flat-out destroyed two overmatched opponents to start the season. In the seasonopening pounding of rival South Lamar, the Bulldogs piled up 312 yards on the ground with seven rushing touchdowns and featured 11 different running backs with carries. Last week, Cold Springs never had a chance as the Bulldogs busted out to a huge early lead and was up 47-0 before Cold Springs ever got on the board. The Bulldogs have good depth at running back and will look to pound behind an offensive line that is not huge (avg. 210 lbs.) but very effective. The Lamar County passing game is capable of making plays but simply hasn’t had to yet. The Bulldog defense smothered both South Lamar and Cold Springs with an aggressive attacking style that sends as many as eight defenders at the line of scrimmage when the ball is snapped.

Cleveland played Sulligent toe-to-toe last week. The Panthers simply made too many mistakes – mainly dropped passes and turnovers – to beat a quality opponent. That is the key this week for Cleveland. The Panthers cannot be their own worst enemy against a team like Lamar County. Cleveland has proven playmaking ability – Chas Cornelius went 70 yards against Sulligent last week and Dusty Cornelius made plays with his arm against Locust Fork – and Lamar County has been relatively untested so far this season. Cleveland needs to get off to a good start and avoid getting buried early on – something that South Lamar and Cold Springs could not do. The Panther defense has to slow down the Bulldog running game and make Lamar County throw the football.

A pair of teams still looking for a win meet this week in Somerville.

Hayden just never could get going on offense last week against Haleyville. The Wildcat running game was held in check and interceptions (three in all) proved to be the undoing of the passing game. Reese Butts has found a favorite target in tight end Seth Gardner and the duo have already connected on a pair of touchdowns this season. Butts has put together decent numbers – 11 of 19 for 121 yards with 4 touchdowns and 2 interceptions. However, the Wildcat running game needs to improve – Hayden has just 172 yards in two games. Also, the Wildcats need to hang on to the ball – Hayden committed seven turnovers in two games. Brewer has played well on the defensive side of the ball through two games so it may not be easy this week. The Wildcat defense will face a Brewer offense that has generated yards but not points so far this year.

Brewer has been competitive in the first two games of the year but hasn’t been able to put things together yet. The Patriot defense has actually performed pretty well, especially last week against Mortimer Jordan. Brewer has good size across the offensive and defensive lines and a bit of quickness in the backfield but the offense has just not been efficient against Madison Academy and Mortimer Jordan. In both games the Patriots had promising drives end with penalties or turnovers. New head coach Daniel Gullion is still moving personnel around and has not been able to find the right combination. Big plays have been hard to come by on offense so this is a Brewer team that needs to run the ball and control the clock to be effective. Hayden cannot let the Brewer running game control the football.

Next week – Hayden travels to Jasper to face Walker;
Brewer goes to Birmingham to meet Erwin.

The Redskins didn’t feel like they put together a very good effort in week 1 and they apparently took out their frustrations on what was thought to be a pretty good Jacksonville team last week. Oneonta beat the Golden Eagles into the Gilbreath Stadium turf with a running game that piled up more than 400 yards. Oneonta didn’t pass for a lot but the Redskins didn’t have to with the running game ripping off eight yards every time the ball was snapped. Look for Oneonta to try and establish the run early this week. The Redskins showed a bit of imagination with some different formations, including one with Nolen Smith lined up in the shotgun (the WildSkin?). The Redskin defense took the running game away from Jacksonville last week and will try to do the same this week.

Locust Fork got off to a good start last week before surrendering 28 unanswered points in the second quarter. That is exactly the type of lull that the Hornets will need to avoid this week to have any chance against Oneonta. Unfortunately for Locust Fork, the Hornets are not a healthy football team with a couple of players missing practice with injuries this week. Locust Fork needs to get a good start against Oneonta and pressure the Redskins just like Arab did when Oneonta was forced to come from behind in the fourth quarter. The Hornet offensive and defensive fronts have good size and these groups will need to have a great night to control Oneonta and slow down the Redskins. Special teams, especially coverage units, were shaky last week and need to be better this week against Oneonta’s explosive return units.

Next week – Oneonta returns home for a region showdown

with Cherokee County; Locust Fork is on the road
at Ashville.

Can Winfield’s running game wear down the Tigers?

The Pirates opened the season by getting waxed at Fayette County in a game in which the Pirate offense never got off the boat. However, the Pirates last week at home with a better effort against Vinemont. Winfield led 8-6 after one quarter and slowly pulled away from the Eagles. Winfield operates out of a double-wing set on offense and will look to pound on the opponent. Winfield is so run-dominant that the Pirates have attempted fewer than 10 passes through the first two games. The Pirates have good size across the offensive and defensive fronts (avg. 225 lbs.) and there is solid depth on both lines. The Winfield defense has been solid, particularly against the run. 4A Fayette County was able to bust a couple of big plays but the Pirate defense has been tough to move against.

Pennington responded from the opening week shutout loss to Susan Moore with a good effort at Carbon Hill. The Tigers were balanced on offense – almost 300 yards rushing; 120 yards passing – and took control of the game early with a pair of first-quarter scores. Sophomore fullback Wesley Stephens is not big (5’5, 145) but ran last week like he was 6’4, 250 with almost 200 yards and a pair of touchdowns. The Tiger offense needs to run to set up the play-action pass and Lee Morton had a great night throwing the ball last week. The Tiger defense will be tested this week by a Winfield offense that will run a mixture of power and misdirection. Stopping the run is paramount this week, especially given Winfield’s lack of a passing game through the first two weeks.

Next week – Winfield is back at home to face
Hamilton; J.B. Pennington travels to Hanceville.

Bulldogs try to maintain hold on region with long trip to Jackson County.

Susan Moore dozed off for about three minutes late in the first quarter last week but other than that, the Bulldogs totally decimated Holly Pond. The Bulldog running game did a number on a Holly Pond defense that was thought to be tough to run on. Look for Susan Moore to try and get Blake Weaver and John Evatt going early again this week. Justin Hawkins was very efficient in the passing game and he will face a Pisgah secondary that has not seen the ball in the air much through the first two weeks. Susan Moore may look to air it out a bit more down the field – similar to last week when Hawkins just missed on a couple of deep balls against Holly Pond.

Pisgah opened up the year with a tough loss to 2A rival Ider before rebounding to roll over Brindlee Mountain last week. Pisgah is a veteran team that lost just one starter off of last year’s playoff squad. The Eagles prefer to stay on the ground in the wing-T and will use a stable of running backs. The Eagles have some size across the offensive and defensive fronts (avg. 225 lbs.) and these units have played pretty solid football so far this season. The Eagles have good quickness and a bit of playmaking ability at the skill spots. Special teams are just average for the Eagles, although the return game is potentially potent. There is lots of experience throughout the Pisgah roster but depth is a bit of an issue along the offensive and defensive lines.

Next week – Susan Moore stays on the road with a trip
to New Hope; Pisgah travels to Crossville.