Region play begins for most 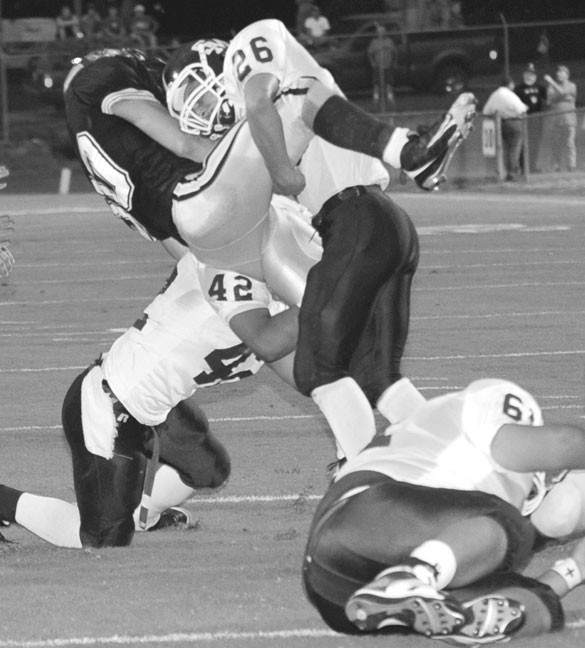 Week two of the high school football season signals the start of region play for most of our teams – Hayden actually started the year with a region game last week.

Appalachian defeated Spring Garden last week despite a couple of early turnovers and a subsequent 14-0 deficit. The Eagles will look to pound away on a Jacksonville Christian defense that was exposed a bit last week. The Eagles were able to get the running game going but the passing game never really took flight. The Appalachian defense slowly choked the life out of Spring Garden and will face a Jacksonville Christian offense has some talent. The Thunder are young in a lot of places but showed last week that they have the ability to come together and put some points on the board. The Eagle offensive and defensive fronts should have an edge on Jacksonville’s.

Tommy Miller guided the Thunder (love the mascot) to a 5-5 record a year ago but lost some key players off that team. ASD knocked off Jacksonville Christian 38-20 last week with the Thunder turning the ball over five times. Miller’s team is not experienced enough to overcome that many turnovers and certainly can’t expect to win this week playing that kind of sloppy football. The Thunder do have some quick kids at the skill spots and enough size up front to cause some problems for the Eagles. However, depth is a big issue for Jacksonville at almost every position. Appalachian had some problems with Jacksonville early last year and the Eagles need to come out firing all cylinders this week.

Cleveland did some good things last week in the 15- 14 loss to Locust Fork. The Panthers moved the ball at times but had trouble finishing drives. That will need to be cleaned up this week because the Panther defense will face a ton of speed and play-making ability in a potent Blue Devil offense. The Cleveland offensive and defensive fronts will need to have good nights to slow down an aggressive Blue Devil team that likes to attack on both sides of the ball. The Cleveland running game needs to produce more this week – just 88 yards against Locust Fork last week – to move the chains and keep the Blue Devil offense off the field.

Sulligent lost a 40-38 shootout last week at home to powerful 3A Hamilton. The Blue Devils played for the 2A title a year ago but are rebuilding in several areas due to graduation losses. With Caleb Massey now playing for Troy, the Blue Devils will look to feature running back Robert White (5’7, 165 Sr). He is small of stature but plays like he’s 10-feet tall (and bulletproof). The Blue Devils are loaded with speed at the skill spots but are thought to be a little thin across the offensive and defensive lines. Special teams, as far as kicking and punting are not strong, but White and several others are terrifying on any return.

Haleyville opened the season by flattening what was thought to be a pretty good Central-Florence team by a score of 33-7. The Lions are under the direction of new head coach Blaine Hathcock, who took over in the spring after resigning from W.S. Neal in Brewton. He inherits a team that has a nice mix of skill and size. The Lions took advantage of four Central fumbles last week in a game played in a driving rain for most of the night. Depth is a bit of an issue for the Lions who will start as many as four players both ways. Vaughn Whiteside (5’10, 175) is a threat at running back and scored the first Lion touchdown a week ago on a 67-yard sprint.

New head coach Steven Kerby knew all about Cullman from his days at Austin and Russellville. However, the 42-19 win by the Bearcats may have showed him what his team is made of. Not in the first half when the visitors stormed out to a 42-0 lead but in the second half when the gritty Wildcats dug down and held on defense and scored 19 points on offense. Haleyville is not Cullman and that’s good news. The Wildcats need to get more out of the running game and that will open up the passing game for quarterback Reese Butts. The Hayden defense played very good run defense (limiting Cullman to just 35 yards on the ground) but absolutely no pass defense. Haleyville prefers to run but can throw.

Next week – Hayden stays in the region and goes on
the road for the first time with a trip to Brewer;
Haleyville returns home for a region date with Oak
Grove.

The Hornets got a much-needed win last week at Cleveland and should take some confidence along on this week’s trip into Etowah County. The Hornet offensive and defensive lines played pretty good football and that will need to continue this week. Locust Fork has some size along the fronts and will have a pretty good advantage this week against undersized Eagle offensive and defensive lines. The playmaking tandem of Colton Armstrong and Taylor Hughes must produce for the Hornet offense to be effective against an Eagle defense that held up well against 5A Southside in the opener.

Hokes Bluff got a big 21-14 victory over Southside last week – a game that just like Locust Fork-Cleveland is a big rivalry tussle. Mike Robertson’s Eagles are never flashy. They simply line up and play solid football and dare you to make enough plays to beat them. Junior tailback Cole Frederick (5’10, 180) is the main Eagle offensive threat. He is a hard-running back with surprising speed and he will test a Locust Fork defense that played the run pretty well last week. The Hokes Bluff offensive and defensive fronts have some experience back from last year but the size you would normally see with the Eagles is not evident.

Next week – Locust Fork gets Oneonta in the homeopener

The Golden Eagles are much improved from a year ago and if you don’t believe me, just ask Weaver. The Bearcats were flattened 41-18 last week at home by a Jacksonville team that just lined up and physically whipped their 3A rival. Head coach Roland Houston has always favored a wishbone, option-type look and will still run some of that. However, the Golden Eagles have gone more to an I-formation look this year and there is excellent speed in the backfield. The key to the success though is the big offensive and defensive lines that Jacksonville has. This is a big, strong physical football team that will line up and come right at the Oneonta defense. That may not be good news for a Redskin defense that got pushed all over Gilbreath Stadium last week.

Oneonta looked very good at times last week but then looked very average at other times. The Redskin offense was able to pile up yards but had trouble finishing drives and the three turnovers came at very bad times (not that there is ever a good time for a turnover). The offensive balance was nice (198 yards rushing, 185 passing) and the offensive front played solid football. The Redskin defense simply must play better. This entire unit had problems against what looks to be a better Arab offense than a year ago. The challenge to the Redskin defense this week is to play sound, physical football against a Jacksonville offense that will look to line up and run over anything that gets in its way.

Next week – Oneonta heads to Locust Fork for the first
road game of the year; Jacksonville travels to Alexandria
for a date with the rival Valley Cubs.

The Tigers were competitive last week with Susan Moore but the lack of playmaking ability was evident. This is a Tiger offense that will have to hold onto the ball, pound out first downs, and eat up the clock with time-consuming drives. There is nothing wrong with that. However, the margin for error is pretty small against better opponents. Pennington was never able to get the running game going consistently last week and that could be the difference this week. The Tiger offense must run the ball, if nothing else to rest a thin roster. The Pennington defense played solid football last week. Susan Moore got some yards on the ground but the Tigers limited the Bulldog passing game. Carbon Hill does a little bit of everything on offense and has enough athletes at the skill positions to cause some problems.

Carbon Hill opened the season with a 20-14 win at Cold Springs and it was a game every bit as close as the final score indicates. The Bulldogs are coached by former Pennington (and Locust Fork) assistant Grant Nichols. He has a team that has some skill but appears to be a little short on linemen and depth. The Bulldogs can make some plays, especially senior running back Tony Reid (5’8, 165). He had 177 yards and two touchdowns (93, 46) last week on just nine carries. The Bulldog defense played very well early last week but then had to hang on against a Cold Springs offense that is not thought to be very strong. Depth is an issue for both teams and staying healthy will be a key in Walker County this week.

The Broncos held off rival Hanceville for a 16-14 win in the season opener despite a change in offensive plans. Holly Pond head coach Steve Miller had always been a wing-T man. However, after surveying the talent returning to his team this season, Miller spent the whole summer installing the spread. The experiment may have been ruined when talented senior quarterback Wesley Cook injured his shoulder in a softball game late in the summer. Cook managed to complete 6 of 11 passes for 48 yards. The Broncos went back to the wing-T last week and have plenty of running backs to choose from. Senior guard/fullback Pat Duke (6’1, 250) led the team with 82 yards rushing on just seven carries – all in the second half after moving to the backfield. The Broncos do not have the size they had a year ago but the defense played well last week.

Susan Moore was very workman like in last week’s 29-0 win at Blountsville. With the Tigers keying on the passing game, the Bulldog offense made the home team by pounding out 260 yards and three touchdowns on the ground. Look for the Bulldog coaching staff to work on moving the ball a bit more through the air this week. Holly Pond did a decent job against the Hanceville running game last week but if the home team is able to complete some early passes this week it will make the Broncos have to back off the line of scrimmage. That could open things up for Bulldog running backs Blake Weaver and John Evatt. The Susan Moore defense was very solid last week but there is a bit of mystery to this week’s opponent. Will Susan Moore see the spread or the wing-T? Susan Moore should be good enough to handle either one.

Next week – Holly Pond returns home to face
Crossville; Susan Moore is back on the road for the long
trip to Pisgah.