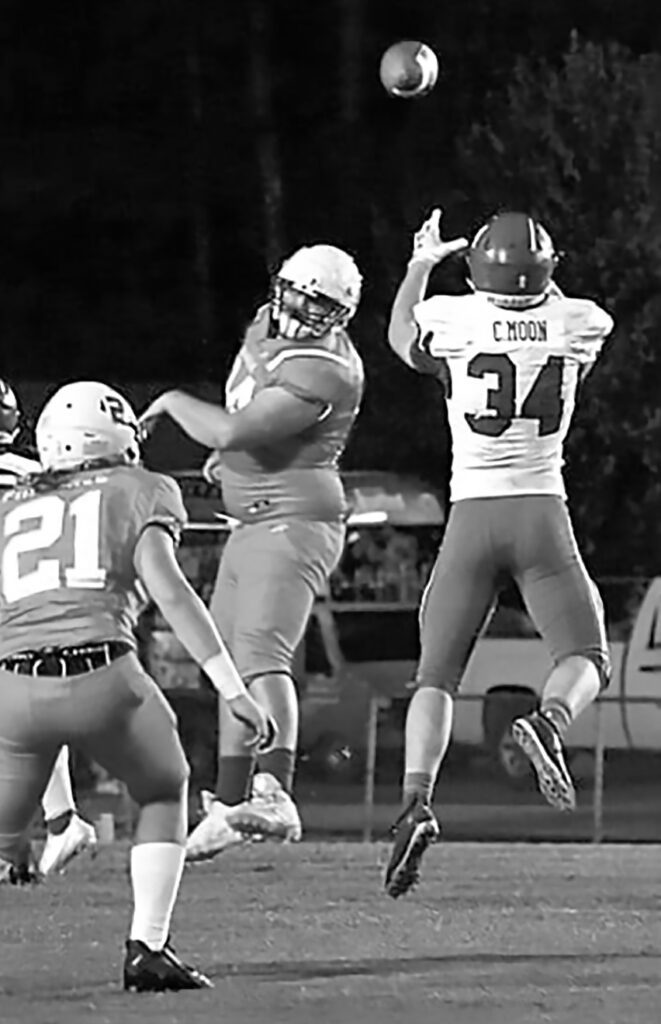 Oneonta’s Collin Moon picks off an Ashville pass and takes it to the end zone for a pick six. -Linc Marcum

Oneonta traveled to Ashville Friday night looking to rebound after suffering their first loss of the season. The Bulldogs might have gotten the first touchdown of the game, but the Redskins scored the next seven, going on to win 47-13.

The Redskin offense totaled 407 yards with 270 of those yards coming from the running game. The Redskin defense held the Bulldogs to 213 yards, allowing only 41 yards through the air.

After Ashville scored at 8:48 in the opening quarter, Collin Moon wasted no time to get his Redskins on the scoreboard, running the kickoff 90 yards for the first of Oneonta’s seven TDs. Angel Marquez hit the extra point to tie the game 7-7. On the next Bulldog drive, Moon intercepted the ball and took it 42 yards to complete the pick six. Another Marquez kick made it 14-7. The Redskins added another touchdown in the final two minutes of the quarter on Brody Moore’s 16-yard pass to Colin Swindle. After Marquez hit his third extra point, the score was 21-7.

Moon scored his third touchdown of the game in the opening minutes of the second quarter. He capped off Oneonta’s 69-yard, 15-play drive with a 1-yard score. The Redskins added one more touchdown before halftime on Moore’s 11-yard pass to Jexton Johnson. Marquez was one-for-two on his extra point attempts for a score of 34-7 at the half.

It took just 40 seconds for the Redskins to score after the break. Moon took off for an 84-yard touchdown on Oneonta’s first play from scrimmage in the second half. A couple of minutes later, Damarian Bothwell ran the ball in for a 4-yard touchdown. Marquez hit the extra point to make it 47-7. Ashville added one more touchdown in the fourth quarter for the final score 47-13.

Moore finished the game with five completions on eight passes for 137 yards and two touchdowns. Johnson was on the receiving end of two Moore passes, scoring on one of them. Swindle’s one catch for 16 yards was the recipient of Moore’s second touchdown pass. Moon caught one for 48 yards, and Davin Young caught one for 52 yards.

Oneonta’s ground game was led by Moon, who totaled 90 yards on three carries, two of those were Redskin touchdowns. Bothwell finished with 83 yards on seven carries for one touchdown. Vargas ran the ball 12 times for 68 yards and Coover had seven carries for 29 yards.

Payton Kritner’s 11 tackles led the defense, while Luke Hodge finished with 10 tackles. Sawyer Nolen recorded eight, Caden Kritner and Cameron Dailey each had seven, and Johnson, Bothwell, Kobe Harper, and Braden Taylor each had five. Moon intercepted one pass, scoring one of his four touchdowns. Dailey got the game’s other turnover, recovering a fumble.

Moon finished Friday’s game with 270 all-purpose yards. He added 132 yards on kick returns to his 90 rushing and 48 receiving yards. His four touchdowns came on two runs, one kick return, and one interception return.

This week the Redskins, who are 1-1 in regional play and 3-1 overall, celebrate homecoming against the 1-1, 1-0 Dora Bulldogs who shut out Hanceville last week in their region opener.