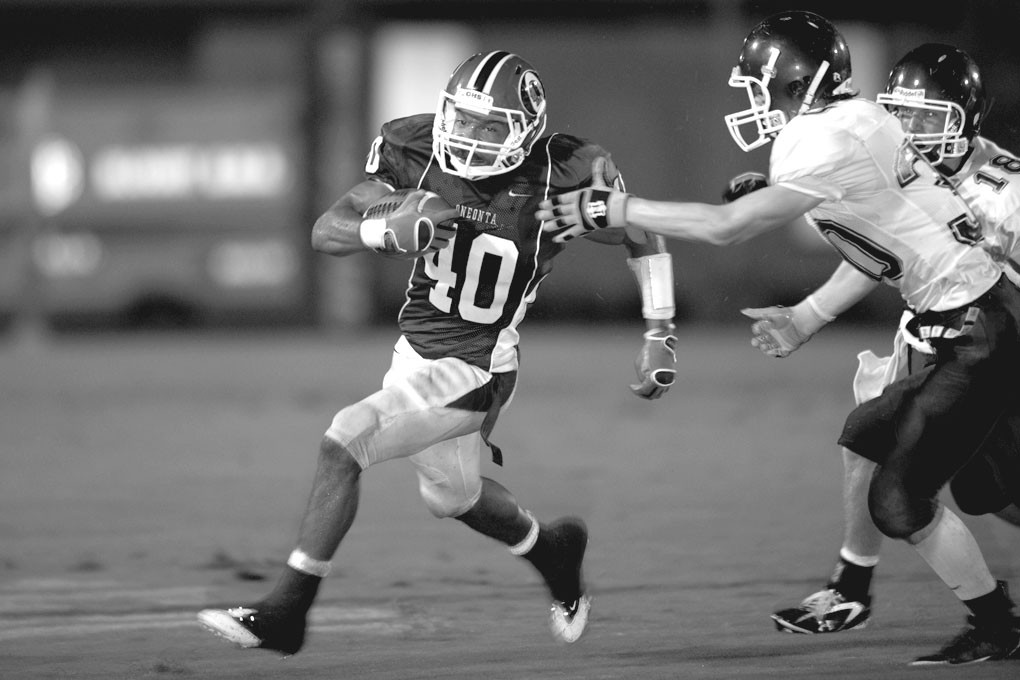 Travis Hankins hit Nolen Smith with a 10-yard touchdown pass and Lee Mitchell drilled the extra point with just 3:36 to play to help Oneonta to a 34-33 victory over visiting Arab last Friday night.


The game went back and forth throughout the night.

Each team showed an offensive spark to start the game but it wasn’t until the second quarter that Arab took a 7-0 lead after a numbing 81- yard, 18-play drive.

Oneonta responded with a 71-yard drive capped off by a 22-yard touchdown run by Brandon Evatt. Lee Mitchell’s kick tied the game 7-7.

The Redskins then took the lead with a five-play, 88-yard drive that ended with a 63-yard pass from Travis Hankins to Smith.

However, Oneonta went to the locker room with a 20-13 lead when Hankins hooked up with freshman Alvin Scott from five yards out.

Arab dominated most of the second half. After a Knight touchdown to open the second half tied the score, Oneonta briefly regained control when Scott took the ensuing kickoff back 70 yards.

Arab scored on two straight possessions to start the second half and led 33-27 before the Redskins scored the late touchdown.

The Oneonta defense was pushed around in the second half but came up with a couple of huge stops late in the game. The biggest was probably a 4thand 1 at the Redskin 30 with just 2:02 to play when Redskin linebacker Jackson Henderson dropped Knight quarterback Jonathan Embry with a huge hit at the line of scrimmage.

Embry had a big night for the Knights. The senior quarterback had 104 yards and a pair of touchdowns rushing and completed 12 of 17 passes for 164 yards with one touchdown and one interception.

The Oneonta offense had little trouble moving the ball. The Redskins piled up 383 yards – 198 on the ground, 185 through the air. However, Hankins was picked off three times.

Evatt led the Redskin ground game with 99 yards and a touchdown on just 10 carries.

Hankins completed 11 of 21 passing for 185 yards with three touchdowns and three interceptions.

Smith caught seven passes for 149 yards and two touchdowns and added another 20 yards on three rushes.

The Redskin defense never could get a handle on the Knight offense and surrendered 389 yards – 215 on the ground, 174 through the air.