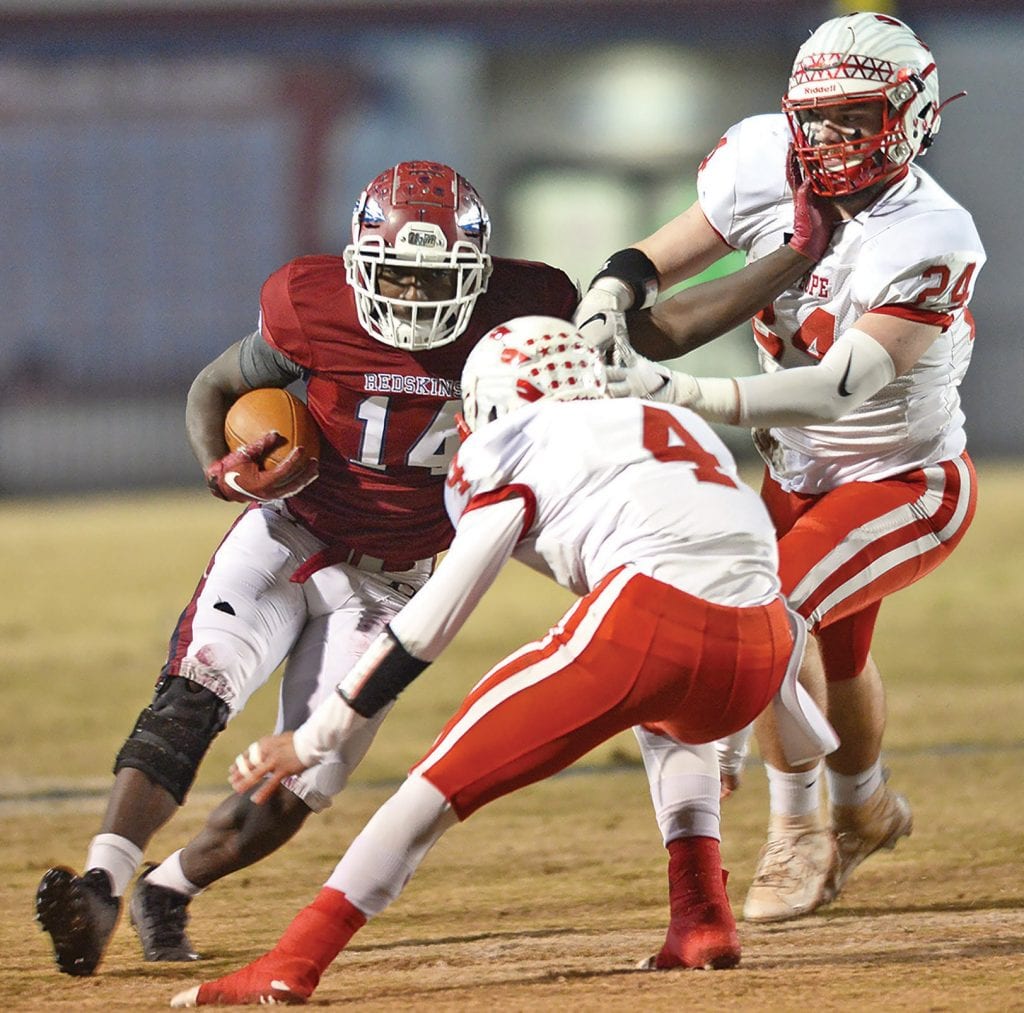 David Hall (14) stiff arms one Good Hope defender as he makes a move to get around another. -www.southernexposurephotos.com

The Oneonta Redskins took on the Good Hope Raiders in the first round of the state playoffs winning 37-29.

The Redskins got on the board first. Erick Vargas’ 23-yard field goal sailed through the uprights to give the Redskins a 3-0 lead going into the second quarter.

The Redskins scored again midway through the second. David Hall got loose from the Raiders’ defense for a 29-yard touchdown run. Vargas added the point after to boost the Redskins’ lead to 10- 0. At the end of the second, Collin Moon busted through the Raiders’ defense untouched for a 56- yard touchdown run. Vargas’ extra point gave the Redskins a 17-0 lead at the half.

The Raiders finally found the end zone in the third quarter bringing the score to 17-6. The Redskins answered later on in the quarter with Hall pushing in from four yards out for a Redskin touchdown. Vargas added the extra point to put the Redskins up 24-6 at the end of the third.

The Raiders began to mount a comeback in the fourth scoring twice in the first five minutes of the quarter and shortening the Redskins’ lead to 24-19. The Redskins extended their lead later in the fourth. Hall found the end zone again from five yards out for another Redskin touchdown. Vargas’ PAT gave the Redskins a 31-19 lead. The Raiders scored again soon after bringing the score to 31-26. 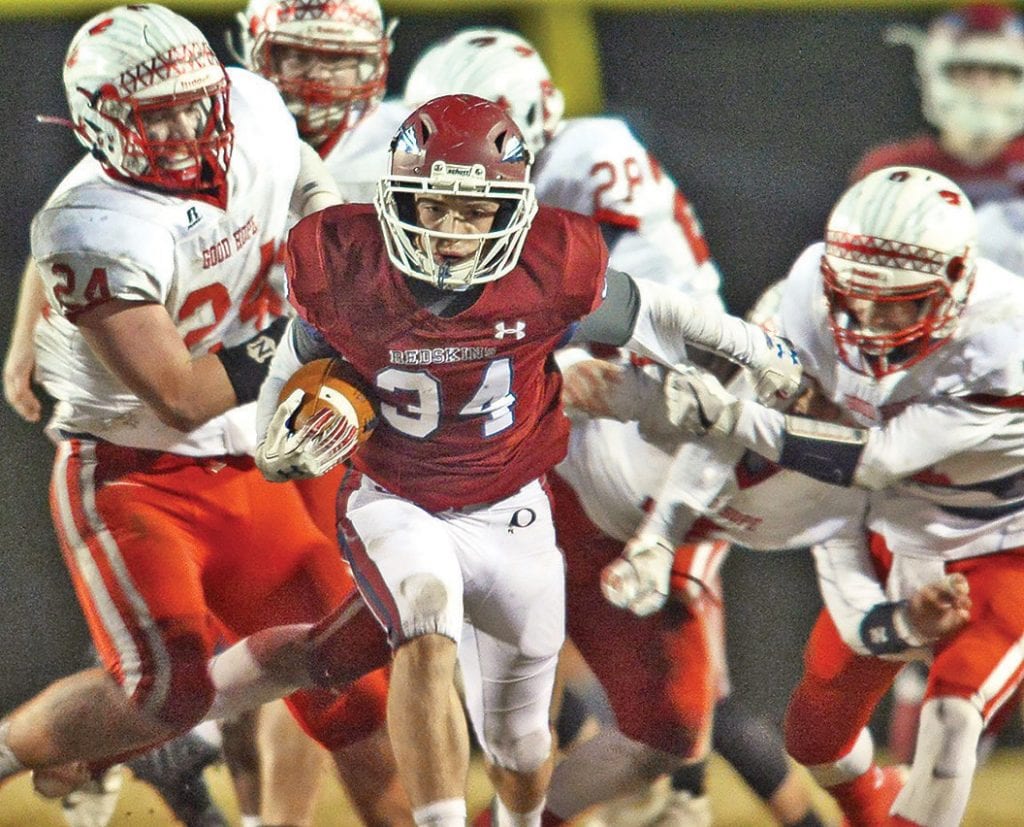 Collin Moon (34) leaves a host of Raiders behind. -www.southernexposurephotos.com

The Redskins answered back with Hall breaking free of the Raiders’ defense for a 59-yard touchdown, his fourth of the night, and bringing the score to 37-26. The Raiders kicked a field goal late in the quarter to bring the score to 37-29. They attempted an onside kick, but the Redskins recovered and ran out the clock securing a win.

Offensively for the Redskins, Brody Pinyan went 13-for-18 for 114 yards. Hall ran 33 times for 237 yards and four touchdowns, as well as catching two passes for 24 yards. Moon ran seven times for 74 yards and a touchdown. Eli Buse caught three passes for 51 yards. Andrew McAlpine caught five passes for 18 yards. Vargas went 4-for-5 on extra points and 1-for-1 on field goals. 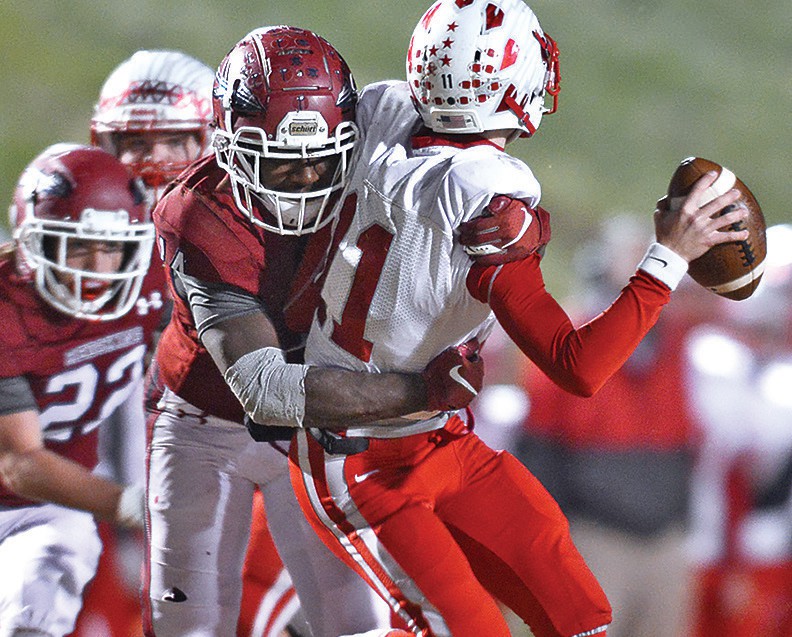 Defensively, Beau Ragsdale had 14 tackles and a sack; Eli Buse had seven tackles; Hall had five tackles, two for a loss, a sack, and an interception; and Luke Hodge had six tackles.

The Redskins move to 8-3 on the season as they advance to the second round of the state playoffs. They will take on the Deshler Tigers (9-3) Friday in Tuscumbia. The Tigers defeated the Redskins by a score of 35-20 last year in the semifinal round of the playoffs. The Tigers then went on to lose 52-0 to UMS-Wright in the championship game. This is the fifth meeting between these two teams in postseason play. The rivalry is tied 2-2.