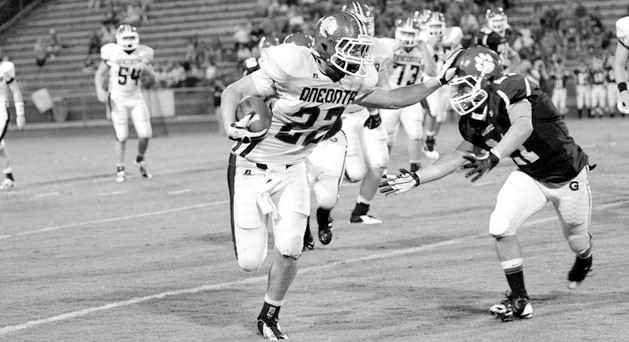 The Oneonta Redskins broke open a 7-3 halftime lead with a pair of third-quarter touchdowns and cruised to a 28-10 victory over Guntersville last Friday night at Guntersville’s Chorba-Lee Stadium. The Redskins, ranked No. 1 in Class 4A, improved to 2-0 overall, 1-0 in Region 6, while Guntersville dropped to 0-2 overall, 0-1 in the region.

Neither team did much on offense in the first half as Oneonta managed just 112 total yards. Guntersville had more yards – 144 total – but didn’t get on the board until Edson Jaramillo drilled a 32-yard field goal on the final play of the half.

Oneonta had taken a 7-0 lead early in the second quarter when Cody O’Toole capped off a 49-yard drive with a 7-yard touchdown pass to Jalen Johnson.Tyler Short’s kick gave the Redskins the 7-0 lead.

The second half belonged to the Redskins.

Two plays into the half, O’Toole found Alvin Scott behind the Guntersville defense for a 56-yard strike and the Redskin lead was 14-3.

Two possessions later, the Redskin defense buried Guntersville quarterback Clayton Daniel for a loss on fourth down and the Redskin offense drove 42 yards on the ensuing possession.

Daniel broke loose for 85 yards on the first play of the following drive to set up the Wildcats at the Redskin 4. Lee Menefee scored on the next play and the Oneonta lead was cut to 21-10.

O’Toole completed 15 of 19 passes for 206 yards and three touchdowns.

Scott caught five passes for 102 yards and two touchdowns while Johnson caught four for 32 yards and a score. Brock Latta had two receptions for 37 yards.

Javon Russell had 12 carries for 58 yards while Tyler Smith chipped in 39 yards on nine attempts and Scott added 42 yards and a touchdown on three carries.

Blake Bean led the Redskin defense with 15 tackles, including three for loss. Ethan Boyd had 14 tackles and Thomas Boyd had 13 tackles with three for lost yardage.