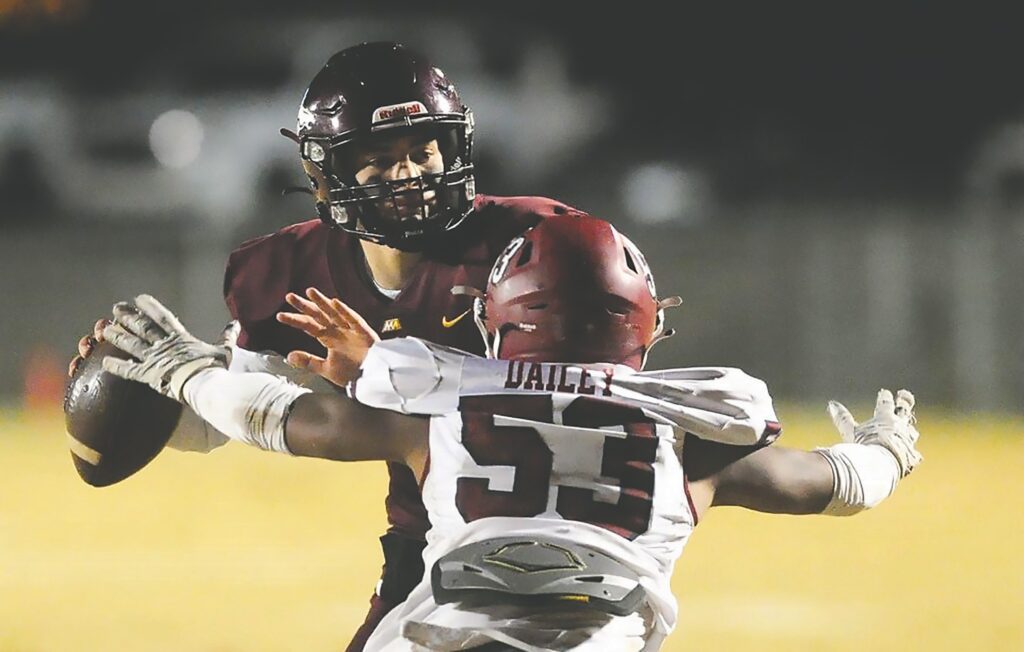 With Oneonta’s 28-24 win over Madison Academy Friday night, the Redskins are making their first appearance in the Super 7 since they won the 4A title in 2013.

The Redskins got off to a fast start, scoring on a 49-yard pass from Braden Moore to Jexton Johnson for a 7-0 lead. The Mustangs came right back, though, scoring 7 with 4:33 left in the opening quarter to tie the game. But Oneonta took a nine-play, 86-yard drive all the way to the end zone, scoring on Damarian Bothwell’s 1-yard run with 0:03 left for a 14-7 lead.

In the second quarter, Oneonta’s defense came up with a couple of big plays to keep the No. 1-ranked Broncos out of the end zone. The Redskins forced a fumble at the Oneonta 13 and later made a key stop on fourth down before blocking the Bronco’s 48-yard field goal try.

Oneonta came out of the break uncharacteristically slow and the Broncos took advantage, scoring 17 unanswered points for a 24-14 lead after three. Madison Academy opened the quarter with a 50-yard TD pass. On the next drive, the Redskins went three-and-out and their 14-yard punt gave the Broncos great field position. 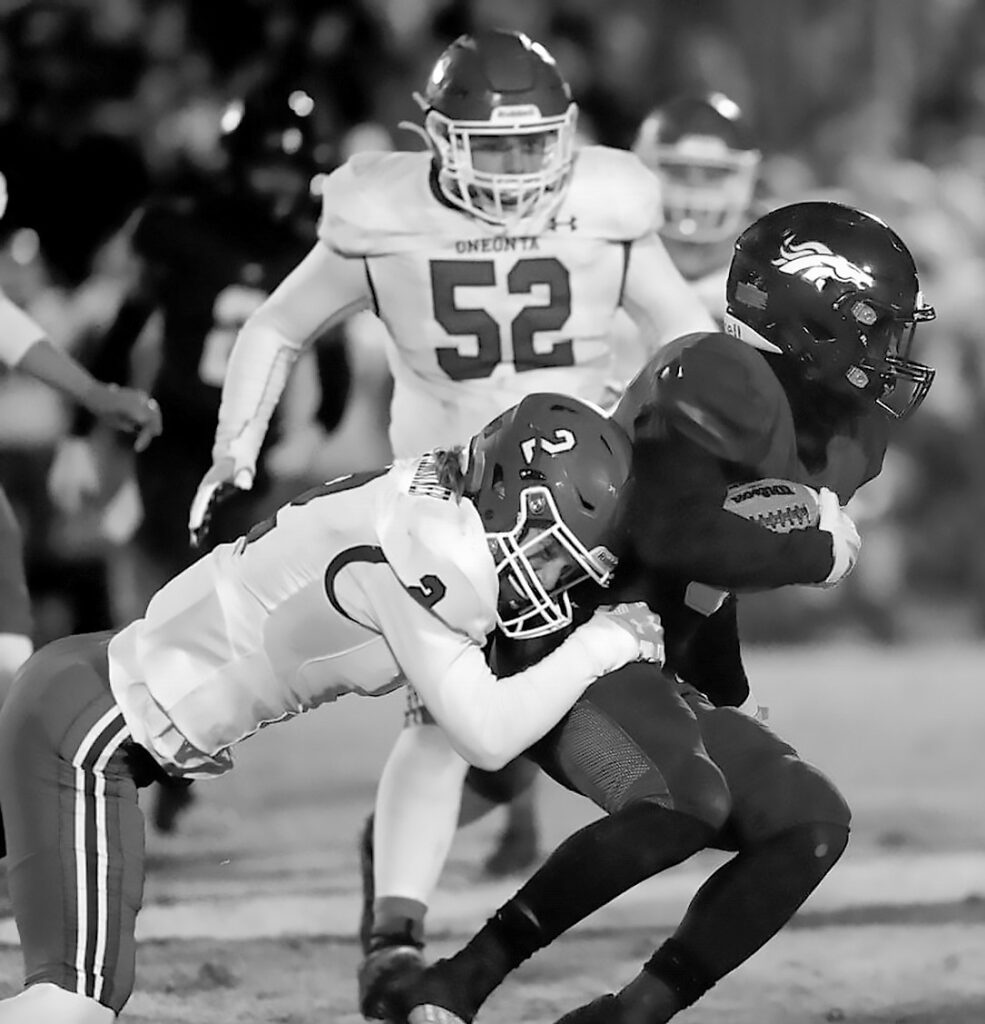 The Broncos then took a 21-14 lead on a 35-yard TD run. Madison Academy’s defense came up with a big play on Oneonta’s following drive, intercepting Moore at the Oneonta 39. With the third quarter winding down, Oneonta’s defense held the Broncos on third down, forcing them to settle for 3.

Down 14-24 and facing a fourth-and-short in the opening minutes of the fourth quarter, the Redskins placed the ball in the hands of Bothwell who got the first down and more. A few plays later, Bothwell ran it in from the 3-yard line. The Mustangs mishandled the ensuing Redskin kick, giving the ball back to Oneonta. The Redskins took advantage going 30 yards in 16 plays, scoring the go-ahead TD on Bothwell’s 1-yard run.

Oneonta’s defense then held the Broncos, putting the ball back in the hands of their offense after stopping Madison Academy on fourth-and-2 at the Bronco 46 with 3:44 left in the game. Oneonta kept the ball on the ground converting three first downs, including a fourth-and-3, to close out the game. 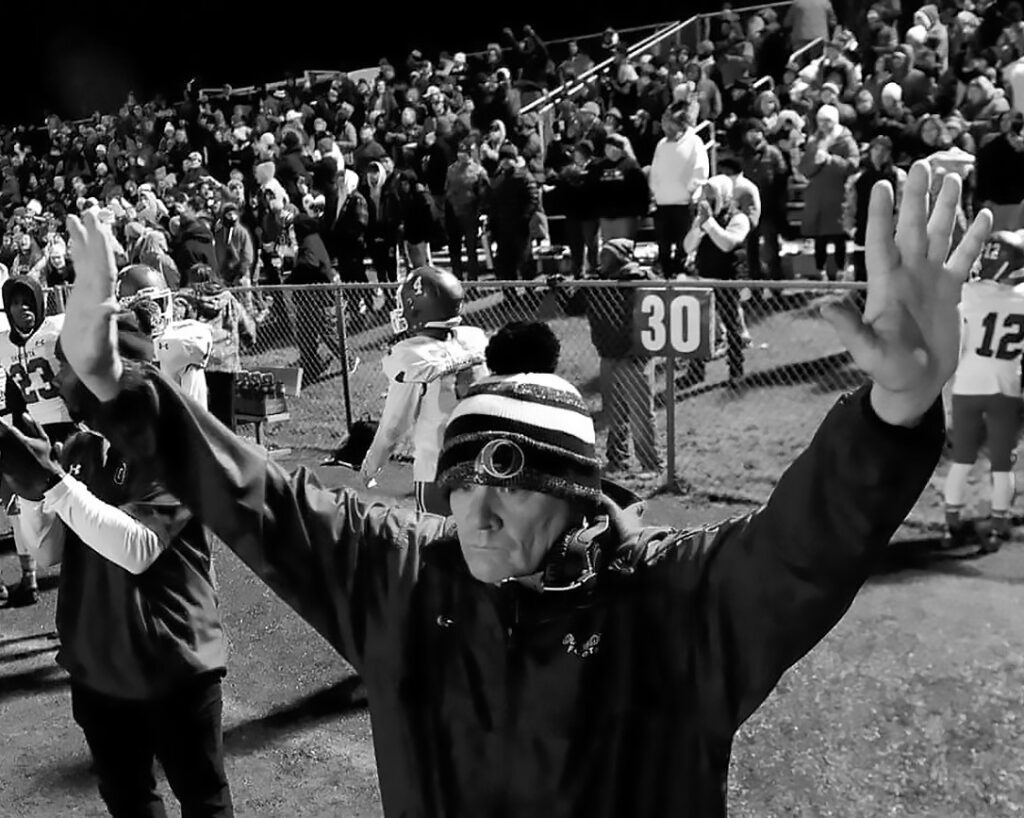 Coach Phil Phillips signals the next play. Behind him, Oneonta fans made the long trip to support their ‘Skins. -Eric Schultz/preps@al.com

Oneonta finished the game with 322 total yards. Moore completed 11-of-15 for 105 yards. He finished with one touchdown and one interception. The Redskins got 217 yards from their running game. Bothwell carried the ball 19 times for 144 yards and three touchdowns, two of those in the Redskins’ fourth-quarter comeback. Moore gained 46 yards on 12 carries while Collin Moon gained 16 on five carries. Johnson’s lone reception went for a 49-yard touchdown. Luke Hodge caught three for 20 yards, Wil Robertson had two receptions for 19 yards, and Colin Swindle had four for 17 yards.

The Redskin defense held the Mustangs to 222 yards and six first downs. They gave up just two first downs in the first half and four in third quarter. Madison Academy didn’t convert their only possession of the fourth quarter. 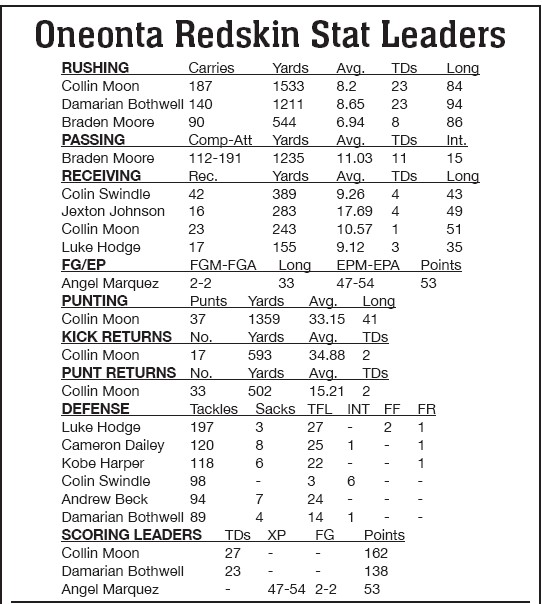 Hodge led the defense with 14 tackles, one for a loss. He also blocked the Mustangs’ second quarter field goal attempt. Bothwell and Cameron Dailey each finished with eight tackles and two TFLs; Kobe Harper had six tackles; and Josiah Coover, Angel Marquez, Cayden Kritner, and Robertson each had five tackles. Bothwell recovered the fourth-quarter Mustang fumble while Marquez and Kritner had one tackle for a loss.

“Fluff’s [Bothwell] fourth-down run in the fourth quarter helped turn that momentum. I feel like Madison Academy played at a different speed in the third quarter, and we just couldn’t get a first down. We needed a stop to have a chance, so to hold them to that field goal was huge for us. It was a neat atmosphere. Our people showed up and they were all right there on top of us it felt like. 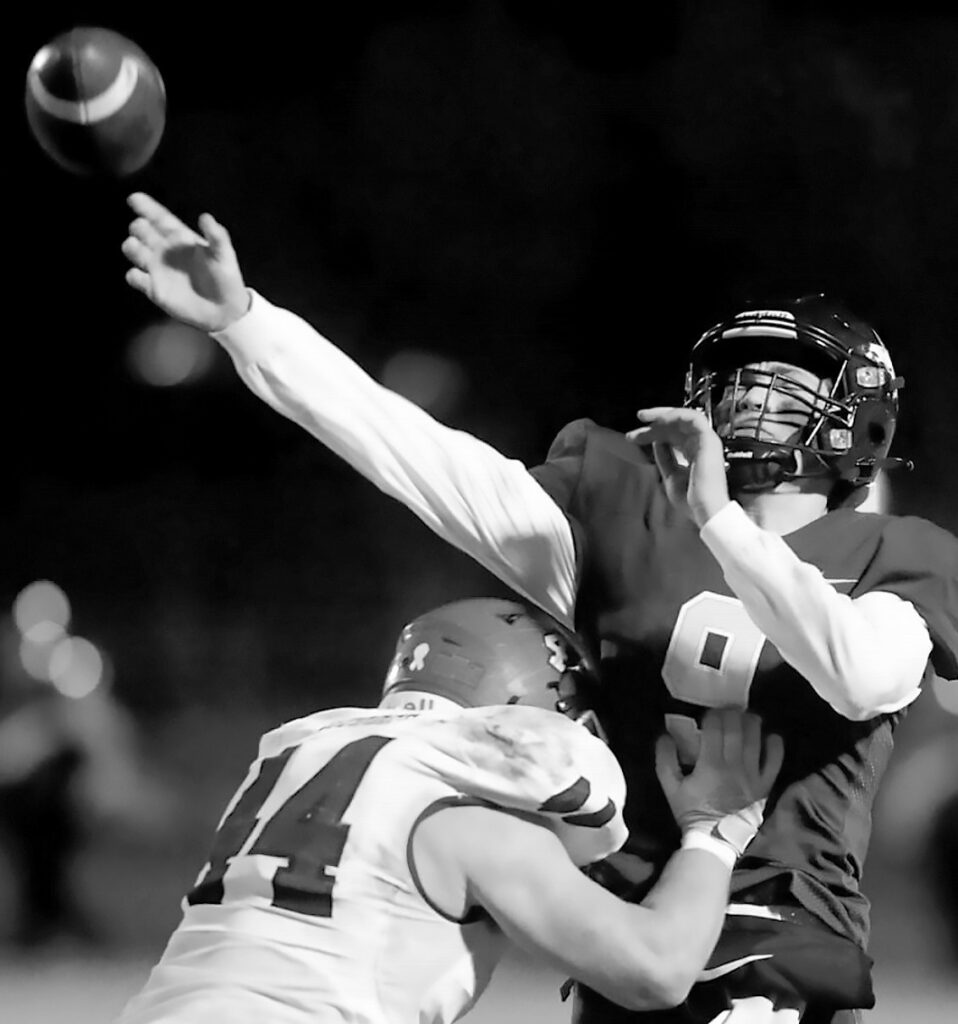 “We knew going into this season that this senior class had the potential to do something special. But we did have a few issues early on. It wasn’t anything on the field and it was just the little things. But kids have to learn how to do the little things in order to do the big things. It took us about a month or so to get all those worked out. And it was around that same time that we got the right combination on the offensive line.

“We’ve been watching Madison Academy all season. It’s the best offensive line I’ve prepared for. For us to get to that level, to play at that level is something else. Our guys just always seem to do whatever they have to do to win. It’s about doing the right things – all of the time.

“These seniors are special. It’s a great group and they’ve been in so many games and so many different situations. They were freshmen my first year, and I knew then they were going to do something special. I’m excited for this bunch. They’ve worked so hard to get here so to see them achieve and accomplish their goals is rewarding. Our seniors are unique and talented, and I hope these younger guys have paid attention because they could have learned a lot.” 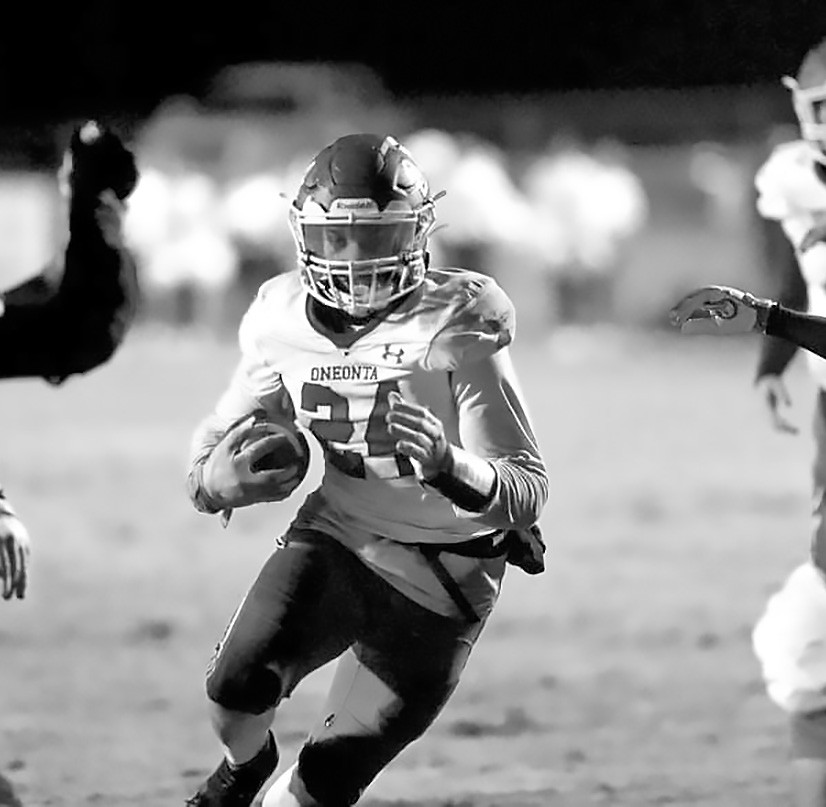 Vigor High School is located in the Mobile County town of Prichard. The Wolves went 7-0 in 4A Region 1, scoring 465 points while holding their opponents to 167. Last Friday, Vigor recorded seven sacks and knocked two Jackson quarterbacks out of the game.

Head Coach John McKenzie took over the Vigor program in 2020, the same year Vigor moved from 5A to 4A.

“I am very impressed with their coach,” Phillips said. “He’s smart, intense, organized. Vigor is a well-coached team. They make plays and they have a bunch of big, strong, athletic guys. It’s really hard to contain a field full of athletes. Their offense is very multiple and No. 7 is the best defender I’ve seen. He wreaks havoc on people.” 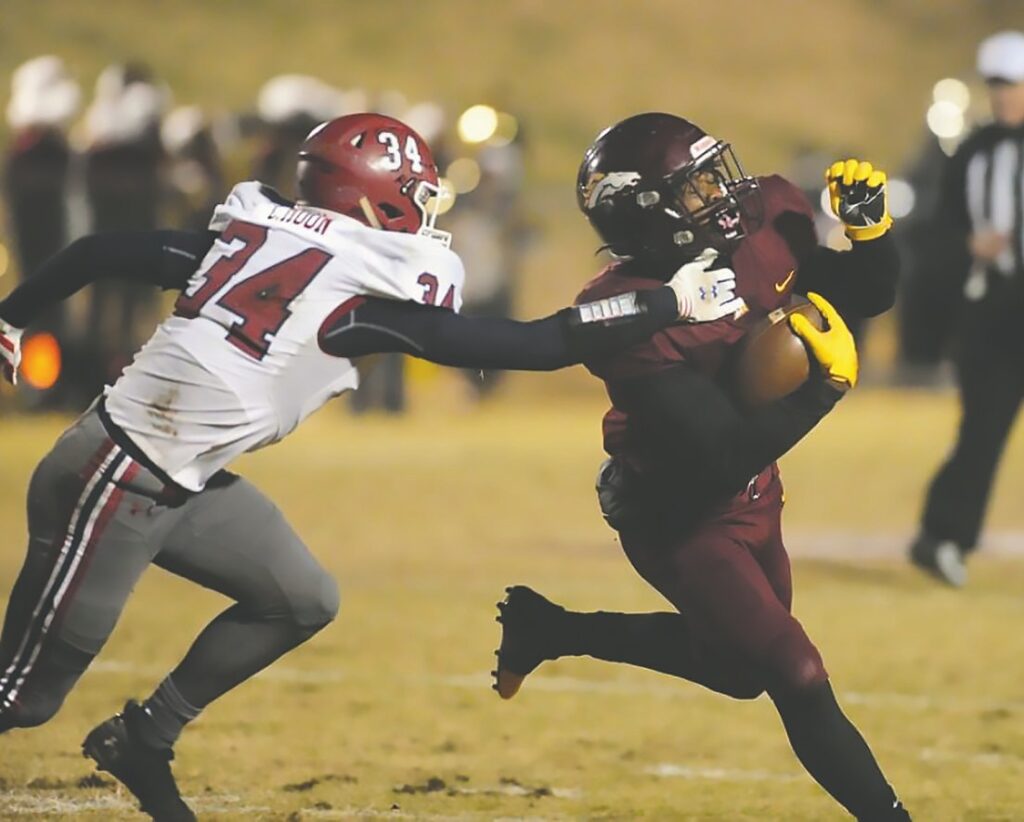