Redskins head to the Plains

Oneonta to meet UMS-Wright for 4A title 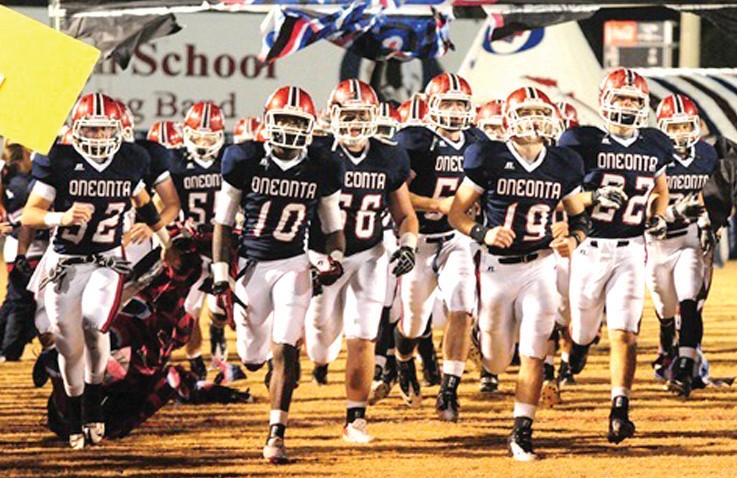 The Oneonta Redskins take the field prior to Friday night’s semifinal victory over Madison County. The top-ranked Redskins rolled to a 40-25 victory over the Tigers and will play UMSWright out of Mobile for the 4A title Friday morning at 11 o’clock at Jordan-Hare Stadium on the campus of Auburn University. There will be a community pep rally this evening at 7 o’clock on First Avenue, next to Downtown Diner. Fans are asked to get the stadium early Friday for “Tiger Walk” for the Redskins which will begin at 9:15. The team will be dropped off at Gate 8 and make their way to the stadium entrance at Gate 10. Tickets are available at the stadium or can be purchased online. For more information, see the preview on A5. – Rob Rice

For the second year in a row, the Oneonta Redskins are in the 4A title game. 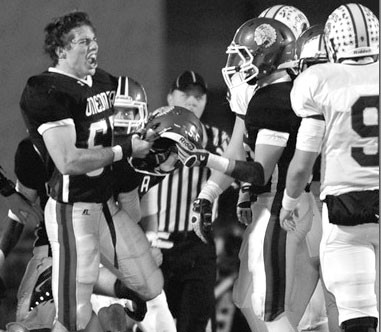 won’t be as much fun watching them on Friday morning. We’re playing our best football now, especially on defense. Just like Oneonta, we are kind of a bluecollar, hard-working bunch.”

Oneonta will meet UMS-Wright out of Mobile for the 4A title this Friday morning at 11 o’clock.

The Bulldogs are the champion of Region 1, the same region as Jackson, the team that defeated the Redskins in last year’s title game.

The Redskins are looking for their fourth state title, and first in Class 4A. Oneonta won back-to-back 2A titles in 1971 and 1972 and captured the 3A title in 2004.

Tickets are $12 at the gate but can be purchased online at www.super6al.com for just $10. Note, there is a small handling fee for all ticket purchases. Tickets purchased online can be printed on your printer and you will not have to stand in line at the stadium. Friday, Dec. 7

The Redskins returned to form last week, leading 17- 0 after one quarter and 24-13 at the half. The lead grew to 40-13 midway through the final quarter before Madison County rallied for a couple of late touchdowns.

Oneonta has now outscored the opposition 434-46 in the first half this year.

UMS-Wright has been very good this season. The Bulldogs are undefeated against 4A competition this year but have been forced to come up with big plays late in several games. To their credit, they have made those plays when needed and will look to do the same this week. By the numbers

Oneonta is 14-0 on the year and the Redskins have been ranked No. 1 in 4A in every poll this season by the Alabama Sports Writers Association. Oneonta is the champion of Region 6.

UMS-Wright is 12-2 on the year and the champion of Region 1. The Bulldogs finished the season ranked No. 8 in Class 4A.

Oneonta head coach Don Jacobs is 34-7 in three years at Oneonta and 56-20 overall in his career. His teams are 11-5 in the playoffs.

The Redskins have featured the running game in the playoffs and if you don’t believe me, just ask Madison County.

Oneonta rolled up 351 yards on the ground against the Tigers, with Tyler Smith going for 213 yards and three touchdowns on 35 carries. Javon Russell added 75 yards and a touchdown on 11 carries and Cody O’Toole chipped in with 50 yards on just seven attempts.

UMS-Wright is averaging 338 yards per game – 216 rushing; 122 passing. The Bulldog defense has been upand down this year and is giving up 283 yards per game – 196 on the ground; but just 87 through the air. Oneonta

For the second week in a row, the Oneonta passing game struggled to do much – especially down the field – against a good secondary.

Cody O’Toole completed 10 of 16 passes last week but they were good for just 73 yards with a touchdown and a pair of interceptions.

Once again, the running game more than made up for the passing game as the Redskins pounded out 351 yards on the ground.

O’Toole has completed 184 of 269 passes for 2810 yards with 43 touchdowns and 12 interceptions. passes for 1158 yards and 20 touchdowns. He is one of three players in state history to go over 1000 yards in receiving three straight years.

The Oneonta offensive line simply had its way with the Madison County defensive front last week. A similar effort will be needed this week if the Redskins are to claim the blue map.

The Redskin defense made plenty of plays last week but the Tigers’ Jordan Chunn did some damage. Madison County finished the night with 163 yards on 26 carries but Chunn had 141 on runs of 71 and 70 in the first half. His other 17 carries went for 22 yards.

Madison County’s Jackson Richard was harassed all night long (Oneonta sacked him four times) and completed 12 of 24 passing for 151 yards and a touchdown with two interceptions. Through the first half he was just 4 of 9 for 19 yards.

The Redskins defensive front dominated the game for the most part last week. At one point in the second half, the Redskin offense ran off 16 points in a row while the Redskin defense had limited the explosive Tiger offense to just 14 yards.

Playing for and winning titles is nothing new to UMSWright fans.

The Bulldogs have played in six title games and have lost just one – a 25-19 loss to Colbert County in the 4A championship game in 1996, the first year of the Super Six format.

While the Bulldog program has a championship pedigree, this is their first appearance in a championship game since 2008. UMS-Wright has just two losses – and those were to very good 5A and 6A teams – but the Bulldogs have struggled at times this year.

McGill-Toolen, the very good 6A, blistered the Bulldogs for 298 yards on the ground and 229 through the air and led 50-7 after three quarters.

The Bulldogs have done a very good job against the pass but opposing teams have been able to move the ball on the ground almost at will, at times.

Thomasville rushed for 425 yards in Week 3 and Clarke County (171) and Andalusia (163) didn’t have much trouble moving the ball on the ground.

St. Paul’s, the very good 5A and one of the Bulldogs’ biggest rivals, pounded out 299 rushing yards to end the regular season.

The trend continued in the postseason as St. James rushed for 348 yards in the first round and the Bulldogs made some wholesale changes after that game, particularly on the defensive front.

Dadeville ran for just 70 yards but passed for 276 in round two and Beauregard rushed for 170 yards in the quarterfinals.

Last week, Dora rushed for 286 yards and was driving for a score late in the game but turned the ball over.

Just like Madison County last week, the Bulldog defense has given up some plays but this is also a group that has forced turnovers and made huge stops in almost every game. UMS-Wright offense

The Bulldogs like to run the ball and mix in enough play-action to keep opposing secondaries from cheating up on the run.

Gunnar Roach (6’2, 188 Jr) has had a solid year as the Bulldogs’ quarterback. He has completed 121 of 195 passes for 1705 yards with 15 touchdowns and seven interceptions and has added another 173 yards and nine touchdowns on the ground.

Troy Dixon (5’8, 181 So) is a great high school running back and he has put up huge numbers. He has 1958 yards on 281 carries with 24 touchdowns. He has added another 64 yards and a touchdown on seven receptions. He is a speedy back who runs with power and is the engine for the Bulldogs.

Hamilton Phillips (5’11, 190 Jr) is a starting linebacker/defensive back for the Bulldogs and he is second on the team with 354 yards and five touchdowns on 49 carries. He had seven carries for 66 yards last week and made several plays on defense. He has good speed and runs with power.

When Roach looks to throw, his favorite receiver is Tyrone Dixon (5’11, 170 Sr), the older brother of Troy and a Samford baseball commitment. He has caught 68 passes for 955 yards and nine touchdowns and is a solid route-runner capable of making plays after the catch.

Michael Jones (6’0, 176 Jr) is the Bulldogs’ second-leading receiver with 26 catches for 423 yards and three touchdowns.

The Bulldogs are solid up front with decent size (avg. 230 lbs) and there is good depth across the offensive line.

The Bulldog offensive line had trouble with McGill Toolen and St. Paul’s and the physical defensive fronts of Bayside Academy (a 3A playoff team), Andalusia, and Beauregard caused plenty of problems. UMS-Wright defense

The UMS defense has a certified start in the secondary and solid, hard-working guys at every other level.

Sam Pettway (6’1, 187 Sr) was an allstate selection a year ago and the unquestioned leader of the Bulldog defense. He is second on the team with 143 tackles and leads the team with three interceptions.

Sophomore Jawon McDowell (5’11, 169) has been picked on a bit this year but leads the team with 12 passes defensed.

The UMS linebackers are an active, athletic bunch. George Williams (5’11, 200 Sr) is the leader of the linebackers and he is tops on the team with 145 tackles.

UMS will be aggressive and blitz and Williams has five sacks on the year.

Williams started the year on the defensive front and UMS has been much better on this side of the ball since he has returned to his middle linebacker spot.

The Bulldog defensive front is not huge (avg. 230 lbs.) but this group has played better since the return of Chris Quinnelly (5’11, 245 Sr). He is a solid run defender and has helped to stabilize the Bulldog defensive line. He is also playing with a torn knee ligament.

Hamilton Phillips (5’11, 190 Jr) is the playmaker of the defensive line. He was expected to be a defensive back or linebacker this year but he has turned out to be the team’s best pass rusher and leads the Bulldogs with 12 sacks. Bulldog special teams

This is one of the strengths of the Bulldogs, and an area that head coach Terry Curtis takes a special interest in.

UMS excels in the return game and both Troy Dixon and Pettway have given opposing coverage units fits this year. In all, the Bulldogs have returned seven kicks – three punts, four kickoffs – for touchdowns this year.

Thomas Taylor is a solid kicker and punter and UMS coverage units are always good but Beauregard did have a punt return for a touchdown in the third round. Oneonta head coach Don Jacobs – “When you look at (UMS) on film, it’s hard to find a weakness. They run it very well and they throw it enough to cause you problems and they are obviously a well-coached football team. There is a reason they are here and that’s because they are a very good football team. We need to be ready to play and that is something we have done all year long.” UMS-Wright head coach Terry Curtis – “They are really good. They do a good job on both sides of the ball. Athletically and size-wise, they probably look like us but they may have a couple of athletes that we don’t have. Coach Jacobs is a longtime friend and he deserves every bit of the success he’s had. I tell you, I like watching his team on film but it probably Notes: UMS-Wright was 9-5 last year and two of the losses were to eventual state champion Jackson. The Bulldogs lost 40-14 at home in the regular season and 26-14 at Jackson in the semifinals. UMS has made the playoffs every year since 1994 – the Bulldogs were 2-8 in Class 3A in 1993. The Bulldogs will be playing at Jordan-Hare Stadium for the first time but they have a connection on campus. Auburn fullback Jay Prosch is a 2010 graduate of UMS-Wright.