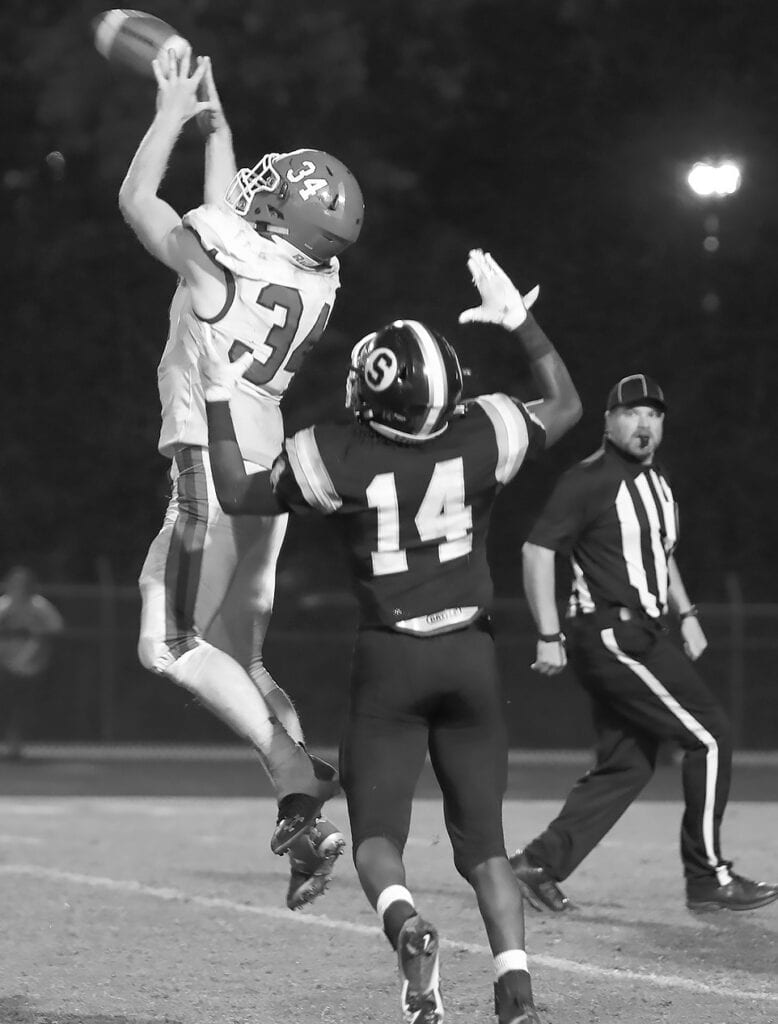 Collin Moon had 23 carries for 217 yards and three touchdowns. Playing both ways, Moon also had six tackles, a fumble recovery, a pass break-up, and an interception he returned for 33 yards. -ChampionPix.net

Oneonta started quickly. Collin Moon was handed the opening snap and took it 68 yards for the first touchdown of the game just 20 seconds in. Angel Marquez’s PAT was good and the Redskins had an early 7-0 lead. After exchanging punts several times, Oneonta found themselves at their own 13-yard line late in the quarter. Moon took another run to the end zone on second down, this one 85 yards. Marquez’s PAT made it 14-0 with 0:39.8 on the clock. An onside kick recovered by the Redskins set them up at the 50-yard line. Connor Faust got off one pass under pressure and the quarter ended with the Redskins in Wildcat territory.

Pressure from Scottsboro’s defense, penalty flags, and a bad snap plagued this drive. Marquez attempted a field goal at the 8:45 mark, but squarely hit the left upright. Scottsboro came to life putting together a six-play, 80-yard drive capped by a keeper touchdown from the 2-yard line. The point after closed the gap 14-7 with 5:53 left. Scottsboro intercepted a pass on Oneonta’s next drive and turned the next snap into points on another keeper. The PAT was good, tying the game at 14-14 with 3:37 left in the half. The only excitement the rest of the quarter was a tip-drill interception by Jexton Jackson. Oneonta allowed time to run out and headed to the locker room to regroup.

Regroup they did. Eli Buse blocked a punt on Scottsboro’s first drive of the second half; Beau Ragsdale recovered and Moon found the end zone three snaps later from 22 yards out. Marquez’s PAT was good to give the Redskins a 21-14 lead with 9:24 on the clock. The Redskin defense forced a turnover on Scottsboro’s next possession. Oneonta capitalized driving 42 yards in eight plays. Faust hit Luke Hodge with a 3-yard TD pass and Marquez’s point after extended the lead to 28-14 with 4:33 left in the third quarter. The third quarter ended with Scottsboro in Oneonta territory.

Two snaps in, QB Gavin McCrary hit Kaylem Dupree in the end zone on a 27-yard pass. A successful PAT closed the gap to 28-21 with 11:44 to go in the game. That would be all Scottsboro wrote. Oneonta’s next drive (72 yards on five plays) was capped by a Faust to Eli Buse 41-yard pass and diving touchdown at the 8:23 mark. Marquez’s PAT made it 35-21. Scottsboro QB McCrary threw an interception (caught by Moon) on their next possession, and Oneonta maintained possession to run out the clock and seal the 35-21 victory.

Faust completed 10-of-19 for 153 yards and two touchdowns. Moon was leading rusher with 217 yards on 23 carries with three touchdowns. He also added a 15-yard kickoff return, a 33-yard interception return, and an 18-yard fumble recovery to give him 283 total yards for the game. Damarian “Fluff” Bothwell put up 76 rushing yards on 12 carries and got one pass for 3 yards. He also had two kickoff returns for 33 yards making his total 112 for the night. Leading receiver was Buse with 79 yard on three catches with one TD. Hodge caught three for 20 yards and one TD. He also had an 11-yard kickoff return. Riley McGill added 34 yards on two catches.

Leading the Redskin defense was Ragsdale with 16 tackles. Hodge contributed nine, Wil Robertson had eight, and Buse put up seven.