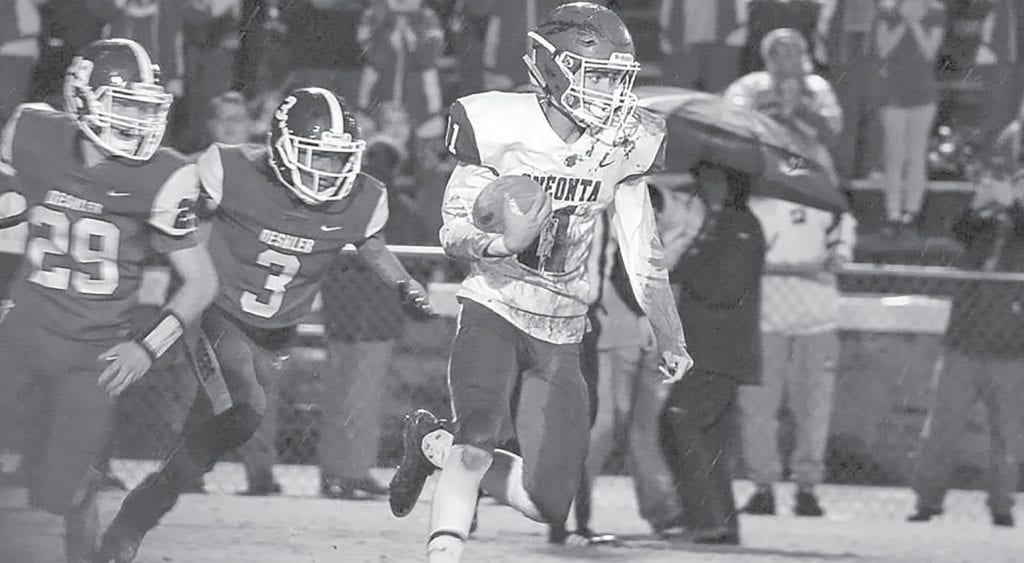 Devin Pendleton (11) had two kickoff returns and one reception for a total of 61 yards against Deshler. -Jimmy Smallwood

Oneonta began to come alive in the second quarter when Taveris Hill connected with Brandon Howard for a three-yard touchdown pass. The Redskins went into halftime 14-7.

The game began getting out of reach for the Redskins when Deshler scored two touchdowns to begin the third quarter. Oneonta scored once in the quarter with less than a minute remaining when Hill threw a 36-yard pass to Howard, making the score 28-14.

Both teams scored once in the fourth quarter, Deshler on an 18-yard pass and Oneonta on a Hill three-yard run.

Hill completed 19-of-37 for 229 yards and two touchdowns with two interceptions.

On defense, Beau Ragsdale led with 11 tackles, one for loss. Kent had seven tackles. Hall and Howard both had six tackles.

Ragsdale punted three times against Deshler with an average of 41 yards per punt. Howard had one blocked punt in the game.

Oneonta finishes their season 10-4. After the turn around from last year and the amount of young talent, it is safe to say the future looks promising for the Redskins.