The second quarter was more of the same. Etowah mounted an impressive drive that ended with a Hail Mary swatted down by Redskin cornerback Collin Moon. The half ended 0-0.

The Blue Devils came out of the locker room ready to play. On their second snap after kickoff, Trent Davis scored on a 41-yard romp. The PAT was good and Etowah was on the board with a 7-0 lead less than 30 seconds into the quarter. The Blue Devils struck again during their next possession on a 65-yard pass to Ollie Finch. The point after made it 14-0 with 7:57 left on the clock.

Collin Moon returned the ensuing kickoff to the 39 yard line. On the second snap, Connor Faust threw a beautiful, 43-yard completion to Riley McGill, but the Redskins fumbled on the next play. Etowah drove quickly into Redskin territory. Moon was ready for an attempted TD pass by the Blue Devils as he intercepted the ball inside the Redskins’ 5-yard line and returned it past midfield. The Redskin offense wasn’t able to capitalize. After exchanging punts, the quarter ended 14-0. 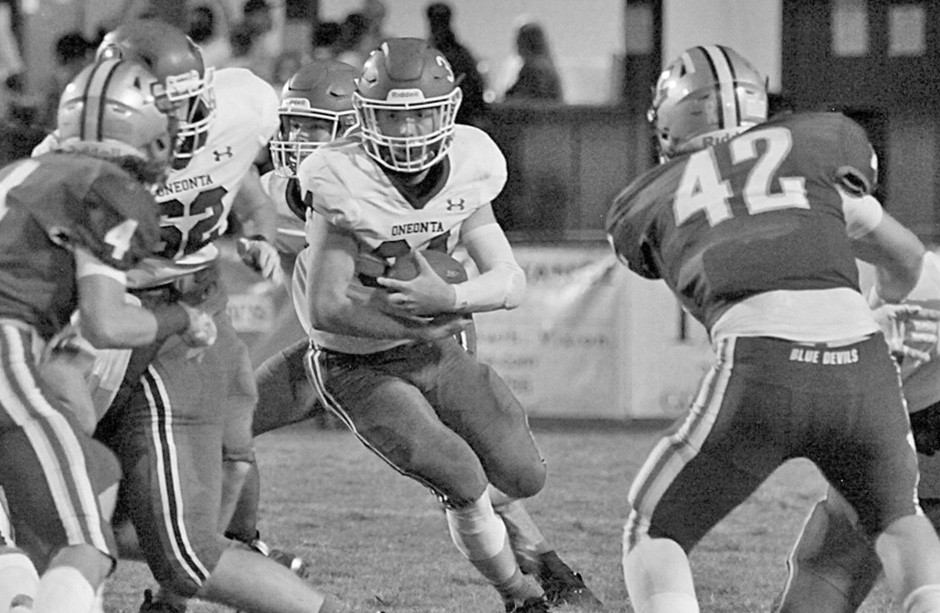 Oneonta finally put points on the board two minutes into the fourth quarter after a well-fought drive to the 1-yard line. Redskin running back Damarian Bothwell punched it in for the TD; the point after made it 14-7.

Faust completed 6-of-19 for 99 yards. The team added 81 on the ground to give them 180 total. Other stats were not available at press time.