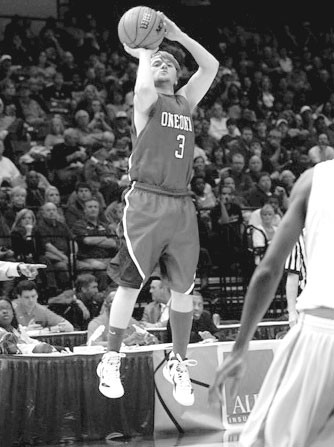 The Oneonta Redskins picked the worst time – and the biggest stage – to play one of their worst games of the year. Midfield outscored Oneonta in every quarter and pulled away for a 71-52 victory over the Redskins in the 4A semifinals last Wednesday at the Birmingham- Jefferson Convention Complex.

Oneonta took an early 3-0 lead on a Ryne Wester 3- pointer just 20 seconds into the game. However, Midfield’s Brandon Moss answered with a pair of long jumper of his own and the Redskins never led again.

Oneonta got as close as two at 12-10 late in the first quarter but Moss scored the last four points of the quarter and the Patriots led 16-10 at the end of one. 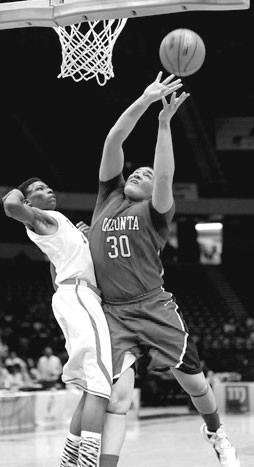 Stedman Bothwell powers to the basket against Midfield’s Brandon Moss.

The second quarter went back and forth.

Midfield got out to an eight-point lead early in the quarter but the Redskins refused to go away. Oneonta got a deep 3 from Wester and a short jumper in the paint from Stedman Bothwell to cut the lead to three (18-15).

However, the Patriots had an answer. Jared Key burieda3andtheleadwasbackuptoseven(23-16) later in the quarter.

The Redskins rallied with a putback from Schyler Walker and a 3-pointer from Austin Owens to cut the Midfield lead to two (23-21) with just under a minute to play in the quarter. However, Midfield got five points from dynamic freshman Tawarren Grant to close the half and led 28-21. 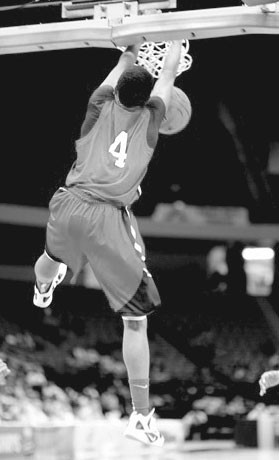 Keenan Warren throws down a dunk.

The second half started well as Keenan Warren drove for a layup to cut the Midfield lead to 28-23 but the Patriots scored the next five points to lead 33-23.

JamesRussellhita3with2:50toplayinthequarter to cut the Midfield lead to seven (35-28) but the Patriots outscored Oneonta 9-3 to close the third quarter and lead 44-31.

Midfield quickly stretched the lead out in the final quarter as the Patriots were able to find openings against a Redskin defense that had been dominant over the last month.

Oneonta’s last gasp came with 2:16 to play. Keenan Warren scored on a short jumper in the paint to cut the Midfield lead to 61-47. Jalen Johnson then stole the inbounds pass and passed to Wester. His 3-point attempt went in and back out and Midfield’s Grant was fouled on the rebound.

The freshman converted both free throws and the five-point swing put the Patriots up by 16 (63-47) with less than two minutes to play.

The Redskins had trouble containing the Patriots as Midfield hit 8 of 22 from 3-point range and 22 of 53 (42 percent) overall.

The Redskins got 17 points and 15 rebounds from Warren but 13 of his points came in the final quarter. Warren was the only Redskin in double figures as Wester finished with eight points and Owens and Bothwell chipped in seven each. James Russell had six points. Bothwell pulled down nine rebounds and Jalen Johnson had six boards. Midfield (15-21) got a game-high 29 points from Moss and 21 from Garrett. Christian Jones added 10 points.

Oneonta outrebounded Midfield 51- 36 but turned the ball over 18 times to Midfield’s 11. Notes

Midfield came back last Saturday to win the 4A title with a 46-45 victory over Butler.

In that game, the Patriots rallied from a 29-20 deficit after three quarters by outscoring the Rebels 26-16 in the final quarter. Grant provided the drama with a long 3-pointer at the buzzer for the winning points.

Oneonta’s Keenan Warren was named to the all-tournament team and the Redskins’ Ryne Wester won the 3-point shootout.