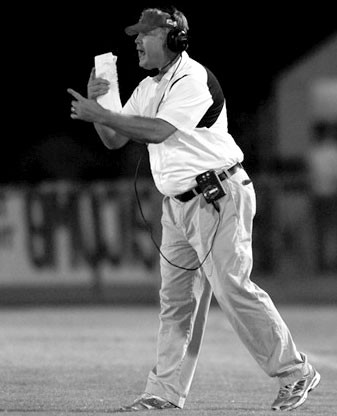 The Oneonta Redskins are coming off a magical 2011 season that ended with a trip to Bryant-Denny Stadium and a tough loss in the 4A title game to Jackson.

If Don Jacobs’s team is to return to the top of Class 4A, they will have to negotiate their way through a schedule that is loaded with potential trouble early and a region that has a couple of tricky road trips looming later in the year.

The Redskins stay in 4A Region 6 but Oneonta is one of just three holdovers (Locust Fork and St. Clair County are the other two) from last year.

The two big threats in the region appear to be Guntersville and Fairview and Oneonta will face both on the road. The Redskins travel to Guntersville in Week 2 and will visit Fairview in Week 7.

The schedule gets even tougher when you factor in non-region games with 5A Pinson Valley and Mortimer Jordan and rival Susan Moore.

Oneonta opens the season with a trip down 75 to take on a Pinson Valley team that is as deep and talented as its ever been.

Matt Glover’s Indians are loaded with potential SEC talent, including Auburn commitment Earnest Robinson who is a big (6’3, 200), physical receiver that can give opposing secondaries nightmares. He’s not alone. There is an explosive sophomore running back and a senior linebacker that are drawing lots of looks from college programs.

Pinson Valley was 9-3 last year and lost 22-21 to eventual state champion Hartselle in the second round.

The second week of the season is awfully early to play what looks to be the biggest game on the schedule. Unfortunately, that’s the hand that’s been dealt the Redskins and the Guntersville Wildcats.

This is a rematch of last year’s first-round whitewashing when the Region 6 No. 3 seed (Oneonta) took the Region 7 runner-up (Guntersville) to the woodshed by the score of 42-7.

Each team returns a ton of starters from that game and the Wildcats will have as talented a group of skill players as the Redskins will see the rest of the year.

Oneonta was the more physical team last year and the Wildcats will be eager to prove they can go toe-totoe with the Redskins.

These teams have met 31 times and Guntersville leads the series 17-14.

The Redskins get region and county rival Locust Fork for the home opener in Week 3.

The Hornets were heavy on offense and light on defense last year and will look to try and balance the scales a bit more this year.

Geoffrey Bramblett put up huge numbers in the Hornets’ spread offense and he will probably have to do more of the same this year, especially early in the year while the defense is going through some growing pains.

Oneonta travels to Crossville in Week 4 to face a Lion program that is trying to rediscover the winning ways of old.

Crossville is led by Robi Coker, who has returned to his home to try and rebuild the Lions into a winner. He is the sixth head coach in the last nine years for Crossville and he returns to his alma mater after a stint as the director of basketball operations at Ole Miss.

These teams have met five times over the years and the Redskins have won all five. Oneonta won the last meeting 49-0 in 2003.

The Redskins step out of region play in Week 5 and waiting on them will be their biggest rival – Susan Moore.

The Bulldogs are coming off a 5-5 season that saw Bubba Jennings’s team miss the playoffs by one game.

Susan Moore moves from 3A Region 6 to Region 5 this year and the schedule makers didn’t give the Bulldogs any breaks in the early season. Susan Moore is coming off of consecutive games against Weaver and Saks and this will be the Bulldogs’ fourth road game in five weeks.

Oneonta jumps back into region play in Week 6 when Douglas visits Gilbreath Stadium.

This will be the Eagles’ fourth year under head coach Brian Knapp and this bunch showed a bit of improvement in finishing 4-6 last year.

Douglas averaged almost 21 points per game last year but gave up 27 points per contest and the better offenses of Fairview and Guntersville each scored 48 on the Eagles.

Knapp wants his team to be physical on both sides of the ball and the Eagles will be a hard-nosed bunch.

These teams haven’t met that many times and it’s probably a good thing for the Eagles that they haven’t. Oneonta leads the series 9-0 but these programs haven’t faced each other since 1993.

The Redskins travel to Fairview for a Week 7 clash that could decide which team hosts a playoff game.

The Aggies were a playoff team a year ago – and each of the last three years – and return one of the best dualthreat quarterbacks around in senior Luke Bailey (6’3, 200).

Fairview lost its top running back and wide receiver but the offense – led by Bailey – is expected to again lead the team. The Aggie defense struggled last year (allowed 25 points per game) and there are plenty of holes to fill on that side of the ball.

These teams have met nine times and Oneonta has won all nine. The Redskins defeated the Aggies 35-21 in the last meeting in 2007.

Oneonta gets a dangerous home game in Week 8 as St. Clair County pays a visit.

The Saints were young a year ago but still put together a 4-6 season that included an upset of Cleburne County at Heflin.

Stronger defenses (Leeds, Oneonta, Anniston) held the Saint Clair running game in check but the Saints are a year stronger up front and will look to pound on the opposition this year.

The Saint defense had trouble stopping better offenses, especially those that had legitimate passing games.

These teams have met eight times and the series is tied 4-4. Oneonta won last year 35-7 at home.

The Redskins will travel to Sardis for the final region game of the year and the Lions could be one of those teams that a lot of people are taking for granted.

The Lions were potent on offense last year (averaging 31 points per game) behind All-State running back Toby Pee (5’11, 185 Sr.). He is a difference-maker and could be the best back in the region.

The Lion defense was a solid bunch, giving up just 14 points per game, but had trouble getting a handle on the speed of Saks in the playoff loss.

The Redskins will close the year by hosting the 5A Mortimer Jordan Blue Devils.

Under former Pennington head coach Greg Watts, the Blue Devils have been a consistent playoff team but the wheels came off a bit last year.

The Blue Devil defense gave up almost 38 points per game. Pinson Valley opened up the year by putting 69 points on the Blue Devils and it didn’t get much better – 49 to Hartselle, 46 to Cullman, and 45 to Walker.

Mortimer Jordan does have some talent on offense but the defense needs to be much better this year.