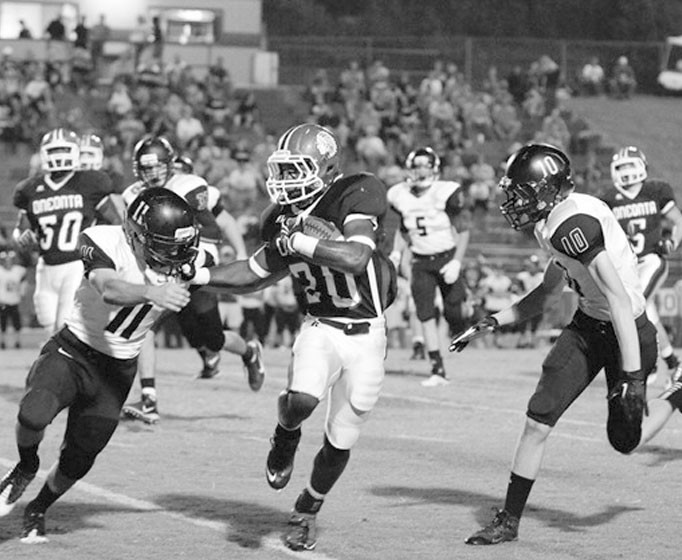 Terrell McDaniel pulls away from a pair of Crossville defenders.

Oneonta held visiting Crossville to just four first downs and 104 yards of total offense in a 49-0 spanking of the Lions last Friday night.

While Crossville struggled to do anything against the Redskin defense, the Oneonta offense pounded out a season-high 299 yards on the ground against the Lions.

Oneonta got on the board early when Rashad Robertson returned a Crossville punt 68 yards for a touchdown. Terrell McDaniel scored on runs of 1 and 2 yards as the Redskins built a 21-0 lead after one quarter.

The second quarter was more of the same as Ko Powell threw an 11- yard touchdown pass to Brock Latta, Avery Reid scored on a 12-yard run, Tanner Moye this Friday night. returned an interception 27 yards, and Keaton Jones added a 4-yard touchdown run and the Redskin lead was 49-0 at the break.

The second half was played with a running clock.

Reid had 103 yards and a touchdown on just three carries while McDaniel had 85 yards and two touchdowns on seven attempts. Jones had 45 yards on two carries and Juan Chavez added 48 yards on 15 attempts.