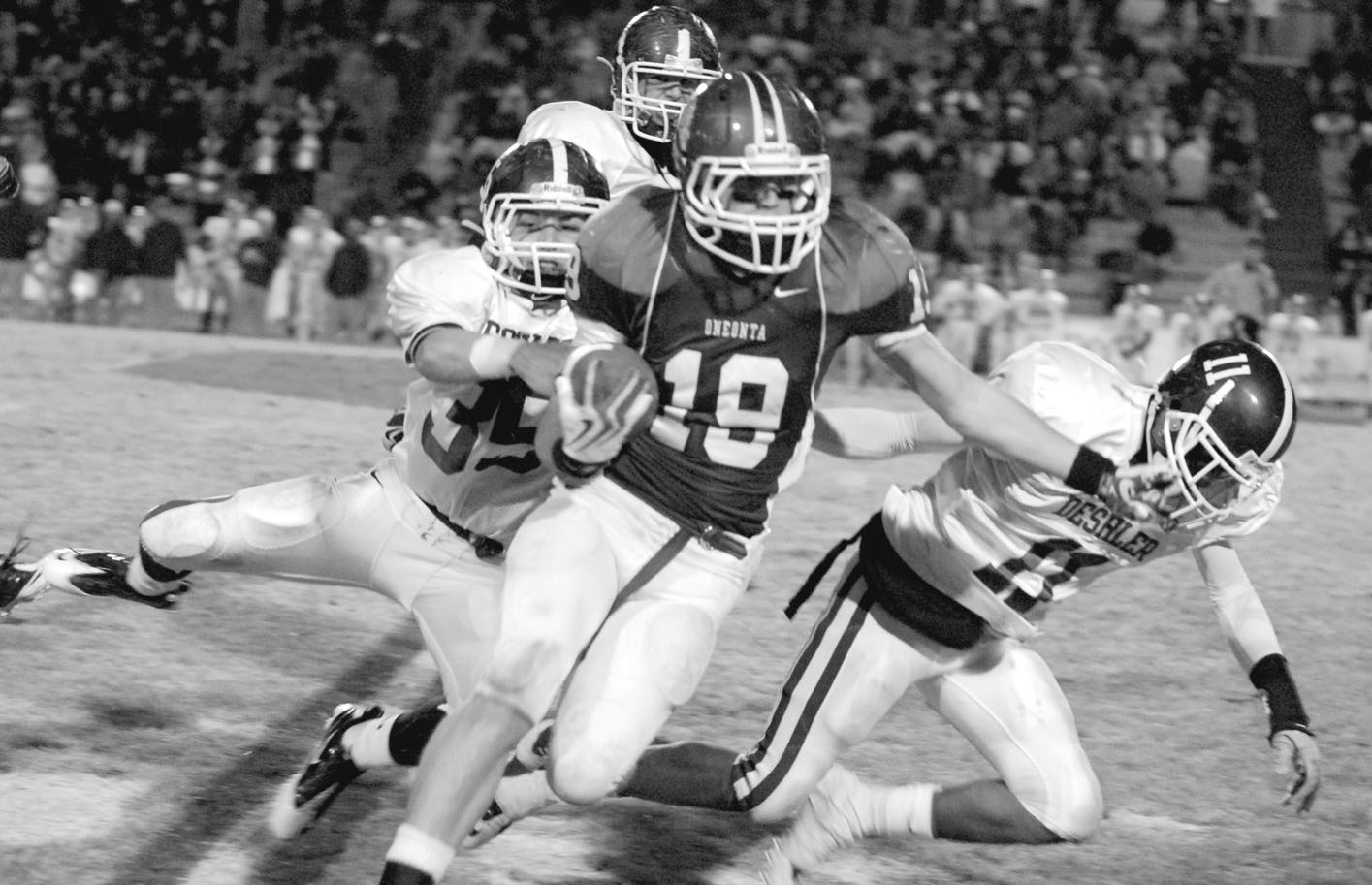 Oneonta running back Tyler Smith runs through a trio of Deshler defenders.

The Oneonta Redskins dominated one of the top programs in the state last Friday night and advanced to the semifinals with a 48-20 win over visiting Deshler.

The Tigers came in with a high-powered offense and the big reputation and immediately jumped on Oneonta with a nine-play, 85-yard drive that ended with a 7-yard touchdown run by Juakeem Fuqua. The extra point was missed but the Tigers led 6-0 with 8:11 to play in the first quarter.

Deshler had the momentum for the first quarter but the Redskin defense began to get a handle on the Tiger offense, giving the Oneonta offense time to settle in.

The score remained 6-0 until the Redskins took advantage of great field position after a short Tiger punt.

The drive covered 50 yards and took almost four minutes off the second quarter clock. After the Redskin running game pounded out a pair of first downs, Schyler Walker fired a perfect pass down the middle to Alvin Scott for a 27-yard touchdown. Adam Tekulve nailed the extra point and the Redskins led 7-6 with 5:06 left in the second quarter.

Deshler looked to answer on the first play of the following drive but Oneonta’s Jalen Johnson picked off a deep ball and Oneonta quickly seized command.

The drive covered 65 yards and Walker fired his second 27-yard touchdown pass of the night – this time to Johnson – and Tekulve put the Redskins up 14-6 with 2:47 to play in the second quarter.

The Redskins weren’t done. Cody O’Toole intercepted a deflected pass on the next possession and the Redskins were back on the board six plays later when Scott scored from nine yards out on a sweep. The extra point was wide but the Redskin lead was 20-6 with 39 seconds left in the first half.

Deshler finally got something going on the ensuing possession with a 42-yard pass completion but the half ended with the Tiger kicker bouncing a 33-yard field goal attempt off the right upright.

At the half, the Redskin defense had surrendered 163 rushing yards but had limited Deshler to just 2 of 7 passing for 39 yards and a pair of interceptions.

The Redskins put the game away on early in the second half.

Oneonta took the second half kickoff and moved 63 yards in less than three minutes with Tyler Smith scoring from 10 yards out. Tekulve’s kick put Oneonta up 27- 6 with 9:18 to play in the third quarter.

The Redskin defense forced a quick stop and Scott weaved his way through the Deshler punt coverage team for a 48-yard return to set up the next drive.

That drive needed just one play to cover 35 yards with Walker taking a keeper off the right side for the score. Tekulve put the Redskins up 34-6 with 7:42 left in the third.

The Oneonta defense maintained its stranglehold on the Tigers and Oneonta looked to score again. However, Chase Bryant was hit at Deshler 1 and fumbled before crossing the goal line and the Tigers took over.

What little momentum the Tigers thought they had disappeared almost immediately. After going threeand out, Scott returned the Tiger punt 34 yards for a touchdown and Oneonta led 41-6 after three quarters.

Deshler finally began to move the ball on the first drive of the final quarter but the Redskins forced a fumble and Thomas Boyd recovered at the Oneonta 26.

Smith gashed the Tiger defense for 34 yards on a pair of runs before Walker found a seam and ran away from the Deshler defense on a 41-yard keeper. Tekulve drilled the extra point home and the Oneonta lead was 48-6 with 9:41 left to play.

Deshler got on the board twice in the final stages of the game on a pair of touchdown passes but the Redskins won 48-20 to advance to the semifinals.

Deshler had plenty of yards – 385 total, with 278 on the ground and 107 through the air – but the Redskin defense played fast and physical throughout the night.

Boyd had a fumble recovery while O’Toole and Johnson each had an interception.

Walker completed 9 of 18 passes for 136 yards and a pair of touchdowns and rushed for 100 yards and two touchdowns on just seven carries.

Smith 156 yards and a touchdown on 20 carries and caught two passes for 29 yards.

Scott had two receptions for 37 yards and a score and Johnson caught two passes for 29 yards and a touchdown.

Deshler ends the season at 11-2 while Oneonta improved to 11-2 and will travel to Anniston (9-4) for this week’s semifinals.