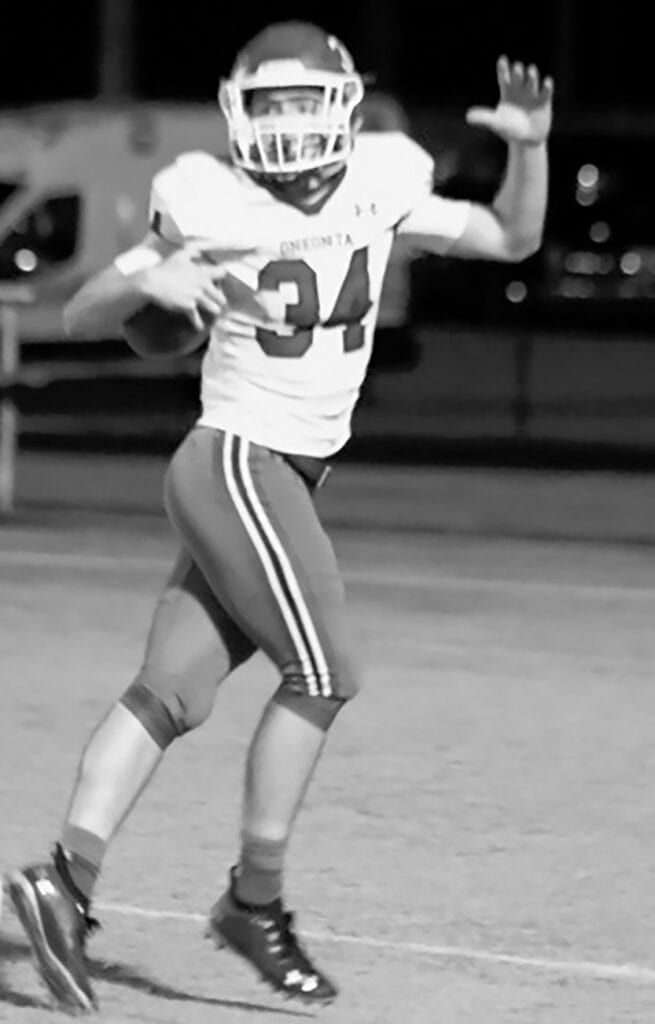 The Oneonta Redskins traveled to Gurley to face the Madison County Tigers in the first round of AHSAA Class 4A playoffs. With several key players quarantined due to COVID-19 exposure, it was a tough game, but the Redskins pulled off a 27-24 victory.

Oneonta drew first blood on a 2-yard romp by Collin Moon with 7:24 on the clock. Angel Marquez was wide on the PAT giving the Redskins an early 6-0 lead. The Tigers struck right back on a 1-yard touchdown capping a 12-play 65-yard drive. The PAT was good giving them a 7-6 advantage with 3:52 on the clock. Then a lot of scoring happened in a little bit of time. Oneonta turned their next possession into points on a 57-yard Moon third-and-2 run with 2:41 on the clock. Marquez hit the point after swapping the lead once again to 13-7. Madison County drove 65 yards in four plays on their next possession and settled for a field goal closing the gap to 13-10 with 1:28 left in the quarter. Moon returned the ensuing kickoff 93 yards to the end zone. Marquez’s kick was good to widen the Redskins’ lead to 20-10 with 1:12 on the clock. Madison County ended the quarter just across midfield in Oneonta territory.

The Tigers chipped away at the Redskin defense and scored from 6 yards out. A good point after cut the lead to 20-17 with 8:00 on the second quarter clock. Oneonta punted on their next possession. The Tigers took advantage of the situation and drove 60 yards, capping the drive with a 4-yard TD and PAT to regain the lead 24-20 with 3:35 left in the half. Oneonta punted again and the buzzer sounded on Madison County in third-and-long trouble.

Neither team managed to score in the third quarter which was rife with penalty flags and turnovers. The quarter ended with Oneonta second-and-8 on the Tigers’ 23-yard line.

After back-to-back sacks, Oneonta was unable to convert and punted. Momentum swung back their way when Damarian “Fluff” Bothwell intercepted a pass three snaps later. Oneonta rallied and drove 56 yards in eight plays (aided by a couple of Madison County penalties). Moon capped the drive with a 4-yard TD. Marquez’s PAT returned the 27-24 lead to the Redskins with 6:09 to go in the game. Madison mounted one last drive, but Moon intercepted a Tiger pass and the Redskins maintained possession to run out the clock.

Oneonta improves to 7-2 and will host the Region 5 No. 1 Gordo Green Wave Friday night in round two. Gordo defeated Brooks 41-12 to advance.