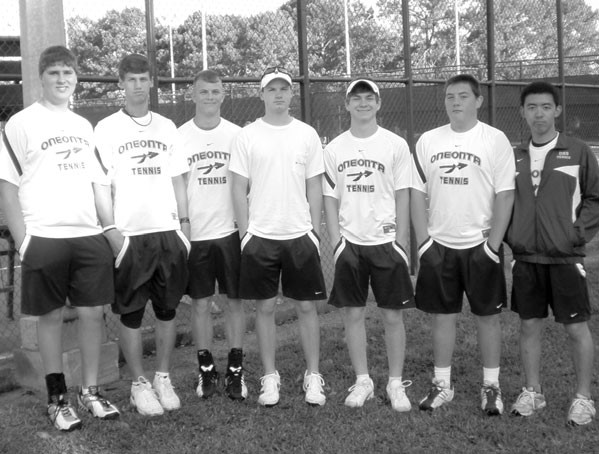 The Oneonta boys tennis team finished fourth in the 4A State Tournament held last week in Montgomery. The finish is the highest ever for an Oneonta tennis team.


Individually, Zac Gargus, playing at No. 5 singles, finished as the state runner-up while Garrett Shaw made the semifinals at No. 2.

In doubles, the No. 3 team of Gargus and Hubauer finished second in the state. Page and Sanders made the semifinals at No. 2 doubles.

The No. 1 doubles team of Shaw and Jimmy Cheng made the quarterfinals.

The team, under the direction of head coach Emily Moore and assistant Gene Vinson, finished the year with a record of 9-3. The girls team, despite a very young roster, finished 5-7.

UMS-Wright swept every top spot to finish first in the state, ahead of No. 2 Jacksonville and No. 3 Guntersville. Ironically, the Oneonta boys beat Jacksonville twice and Guntersville once during the regular season.