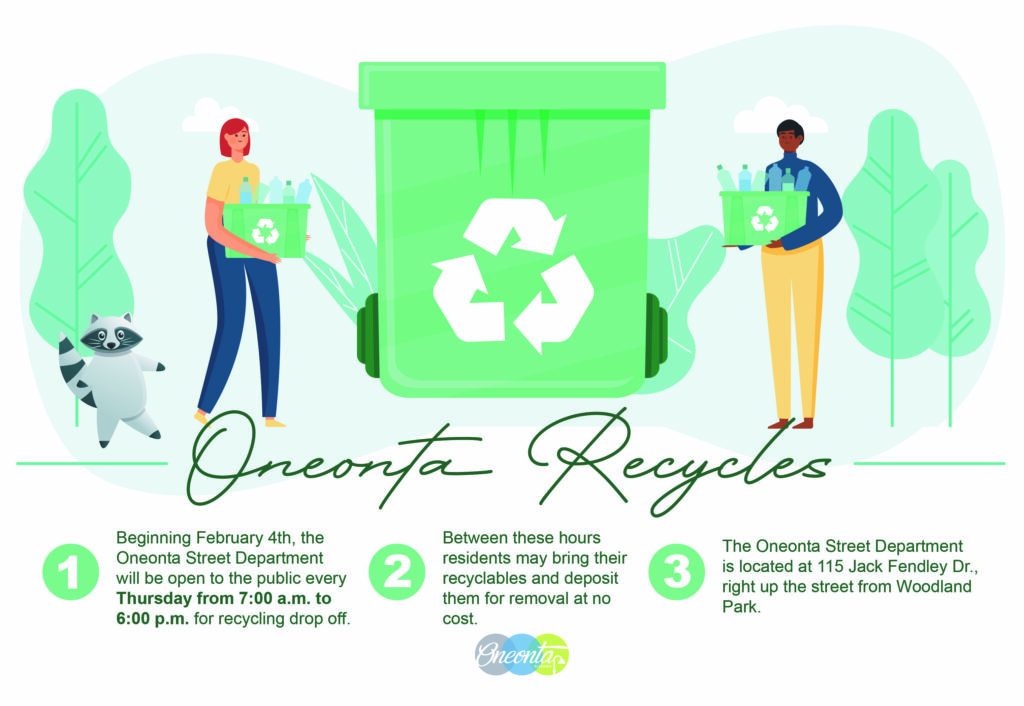 At the Jan. 12 meeting, the Oneonta City Council approved a new recycling program for its residents. Beginning Feb. 4, the “city barn” at the Oneonta Street Department (115 Jack Fendley Drive) will be open to the public for the purpose of depositing recyclables at no cost.

This operation will continue weekly, each Thursday, beginning at 7 a.m. and ending at 6 p.m. The space is monitored and under camera surveillance. Accepted recyclables are: paper and collapsed cardboard, aluminum and tin cans, plastics No. 1 and No. 2. Glass is not accepted.

“Recycling is something members of this community have requested for quite some time,” Mayor Richard Phillips said. “I worked closely with the council to determine a way to offer this service to residents without passing on the cost to everyone. We think this solution is the right one and I am personally excited to participate. As with any service, we will reevaluate its success and make adjustments accordingly over time.”

In other business, the council approved a tax holiday ordinance making both the February Weather Preparedness tax-free weekend and August Back-to- School tax-free weekend recurring events. There is no longer a need to bring them before the council for approval each year.

The council also voted to advertise for a full-time police officer as well as two temporary full-time officers on a three-month basis with no benefits. Phillips explained that due to a multitude of reasons the Oneonta Police Department is “spread pretty thin” and the temporary employees are necessary for the department to better serve the city. Once the three-month period has expired, the council will revisit to see if a three-month extension is needed.

In his report, Phillips reported he had talked with representatives of C-Spire, a company that provides fiber internet. He said the conversation was positive and C-Spire follows Google’s model of a gig city where each home has its own wire running directly to their home.

“Internet is of immeasurable importance to the growth of our community,” he said. “But it’s a process that doesn’t happen overnight.” Currently, officials are waiting on a proposal from C-Spire for review.