Records request seemed simple, but boy, was it a doozy 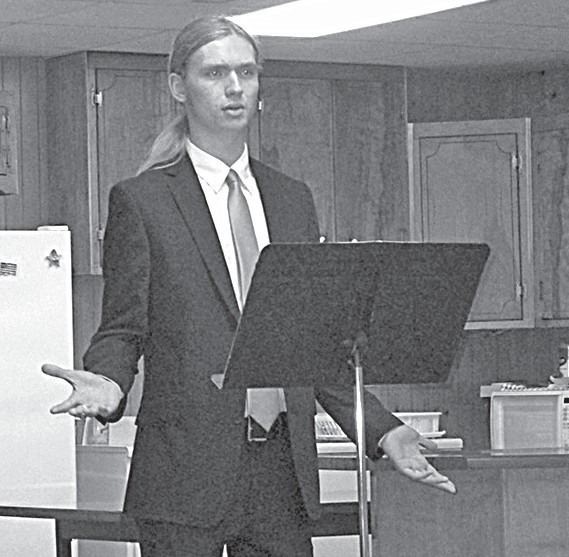 Timothy Brothers’ request for public records from the Susan Moore town council was not complicated, and for that reason he might have thought it would be easy to fulfill. He asked for a copy of all the ordinances Susan Moore has passed – since it was incorporated as a town in 1982. Why? Because “it’s a citizen’s right to know about how the town is run, and how can they learn if they can’t get access to the documents that show you?” he asked.

All the ordinances is about 70 documents and a still-unknown number of pages. Town council members may have suspected something unusual when 19-year old Timothy rose to speak. After all, he’s the son of councilman J.J. and grandson of mayor Jamie.

But they gave no visible sign. The request seemed to hit them semi-hard. Sure, ordinances are public records and citizens have a right to inspect them on request, but the request was for copies of all of them, and it sounded like Timothy might be expecting them to be waiting for him to pick up by tomorrow or the next day, or next week at latest. No citizen had ever asked for even a single copy of an ordinance before, council members said.

They emphasized liability concerns, saying that the ordinances needed to be screened for personal names and confidential or security-related information that would need to be redacted, and that the whole process of reading them and preparing them for release would be time-consuming. There is only one part-time clerk to bear the work load and she’s tied up for weeks right now verifying town residents’ addresses in connection with the U.S. Census Bureau’s request. The town is due some reasonable reimbursement for its costs of providing the copies. These recitations were punctuated by Timothy’s occasional and patient repetition of his theme questions: How and when can copies of the ordinances be made available? It’s a citizen’s right. There must be a way, his persistence implied.

It sounded like a classic standoff until a council member suggested providing Timothy with an index of ordinance titles and dates, and letting him request copies by title to obtain a few copies at a time. The reading of the unexciting titles of 60 of the 70 ordinances by councilmen J.J. Brothers and Josh Price seemed to have a sobering effect on everyone. Both sides gradually came to agreement on the index solution, with Timothy still asking that copies be made available to him on general principle, with periodic updates on progress.

When the meeting adjourned, he had a copy of the index and later said that, after scanning the ordinance titles, he might actually want to read fewer than half of them anyway. Problem solved? Maybe, maybe not. Problem ameliorated? Probably. Time will tell.

While the public records exchange occupied the last 40 minutes or so of the meeting, the council had already transacted the night’s business.

• voted to pay bills for the Birmingham Regional Emergency Medical Services ($132) and the Blount County-Oneonta Chamber of Commerce ($150) annual memberships.

• discussed purchase of replacement matching chairs for the banquet tables in the council chamber, with $840 remaining in the relevant account.

• discussed progress on completion of the 90-person capacity tornado shelter, due to finish by December.

• discussed creating a town police department and where to locate it, with the old fire station mentioned for consideration.

• discussed Susan Moore School’s need for a sound system for the football field, priced at $6,153 for purchase and installation, and voted to provide it at town expense to the school.

• approved minutes of the June 13 meeting when the sound system for the school was discussed and approved the minutes of an earlier meeting in May.

• voted to pay the town’s annual contribution of $1,526 to the Blount County Animal Shelter.