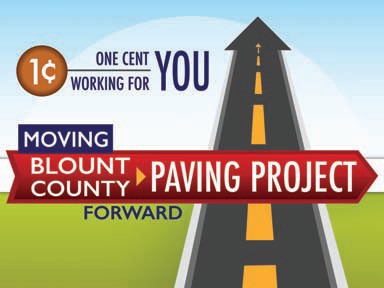 Last week’s article on the Blount County Commission’s acceptance of a $10 million loan package from a local bank to finance more than 70 percent of the Moving Blount County Forward (MBCF) road rehabilitation plan triggered an immediate reaction among some readers.

The drift of questions seemed to be: How come they’re borrowing $10 million to pave roads when the voters just approved a sales tax increase that they said was for the same thing?

The Blount Countian attempted to answer that question several times in news coverage beginning when the Moving Blount County Forward plan – including the decision to submit it to a vote of the people – was adopted. The concluding sentence in last week’s article touched that base again: “Proceeds from the MBCF 1-cent tax referendum will be used to pay off the loan.”

To get an official answer, the paper presented the question to the county’s chief executive, Probate Judge and Commission Chairman Chris Green. Here’s what he said:

“We considered all along from the beginning of MBCF that a loan or bond issue would be the instrument we’d use to finance these road improvements. (Ed. The original MBCF planning document contained projected costs of bond financing. The commission later added bank loans to its investigation of financing costs. A bank loan proved to be the most cost effective.)

“But to pay off the borrowed money, there had to be a funding mechanism in place to make the payments on the loan. In other words, there had to be a revenue stream in place dedicated to paying off that debt. Otherwise, there was not sufficient revenue in the county to make a loan a viable consideration. That revenue stream is what the 1-cent sales tax increase provided. Without it, a loan would not have been advisable.

“The commission could have chosen to simply pave the roads on a pay-as-you-go basis. We didn’t for two reasons. It would have taken years longer to complete the plan if we’d chosen that option, and while we were spending those extra years, the roads would have continued to deteriorate. The most efficient way was to borrow the money in a lump sum, pay it off over time, and complete the paving work within three to five years. A second reason for financing the paving plan is that the cost of borrowing, the interest rate, was at a historic low. We had only a narrow window to take advantage of that before rates were going to rise again, costing the county and its citizens more money.

“I want to remind county taxpayers of an important related point. It has never been represented that the 1- cent sales tax would be sufficient to fix all the roads once and for all. In public meeting after public meeting and in numerous articles over several months this was explained.

“What MBCF does is continue to move us forward and make progress on upgrading our public roads infrastructure that was begun in 2011 under ATRIP (Alabama Transportation Rehabilitation and Improvement Program). ATRIP has concluded, and MBCF continues where it left off. But roads don’t last forever. When MBCF ends, the need to keep up the roads – maybe even to expand the effort to other classes of roads – will continue. It’s a never-ending process and one of the major responsibilities of county government and its citizenry.”