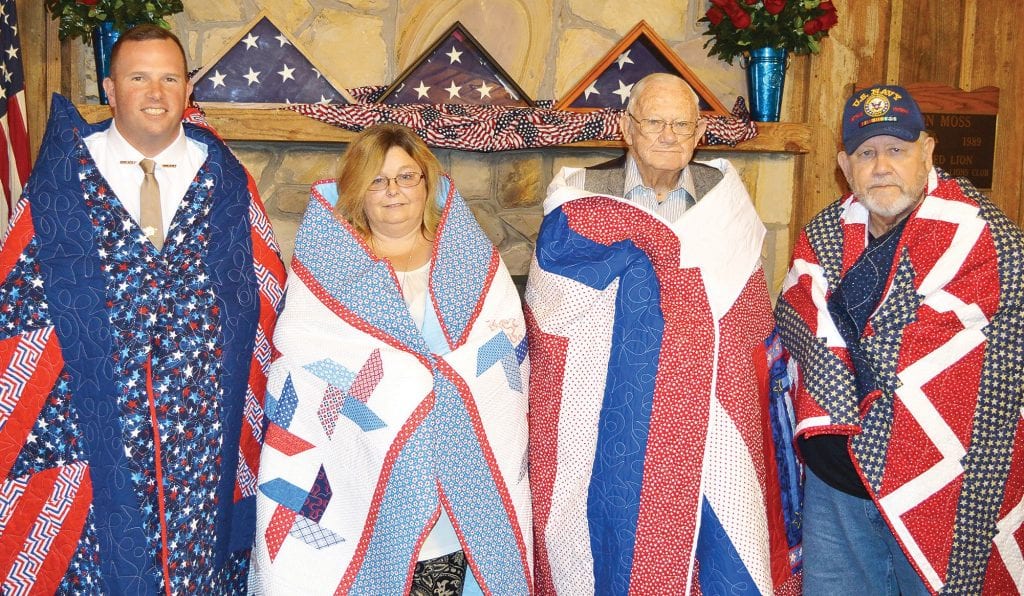 The Blount County Quilters Guild honored 10 U.S. military veterans last Thursday by presenting each of them with a handmade quilt. The ceremony, which took place at Palisades Park, was part of a nationwide celebration of veterans known as Quilts of Valor. Local guild members have been honoring veterans with quilts for years, but this is the seventh consecutive year its members have done so in a formal ceremony.

The Quilts of Valor Foundation started in 2003 when Catherine Roberts, the mother of a son deployed in Iraq, turned an idea into action, according to Guild member and event emcee Kay Calamusa, retired Chief Master Sergeant in the Alabama Air National Guard. Roberts and a few others began providing quilts to veterans as a way to honor and acknowledge their service and comfort them through the warmth of a quilt. Since then, more than 230,000 quilts have been awarded nationwide.

Calamusa explained that quilts have three layers and each has a special meaning. “The top with its many colors, shapes, and fabrics represents the communities and the many individuals we are. The batting is the center of the quilt, its warmth. It represents our hope that this quilt will bring warmth, comfort, peace, and healing. The backing is the strength that supports the other layers. It represents the strength of the recipient, the support of his or her family, our communities, and our nation.”

The Guild also donated quilts and other quilted works to local organizations. In addition to his own quilt, Moon received quilts that the Sheriff’s Office uses in times of need to comfort victims. Ina Brown accepted quilted walker and wheel chair bags that will be given to residents at TLC Nursing Center. Crystal Adams from the Blount County Animal Adoption Center received a number of quilted pet beds.

Moon was also the guest speaker this year and thanked the Guild members for their efforts in helping the community to be “a safer place for everyone.”

For more info about the foundation’s work, go to www.qovf.org. You can also follow the Blount County Quilters Guild on Facebook.