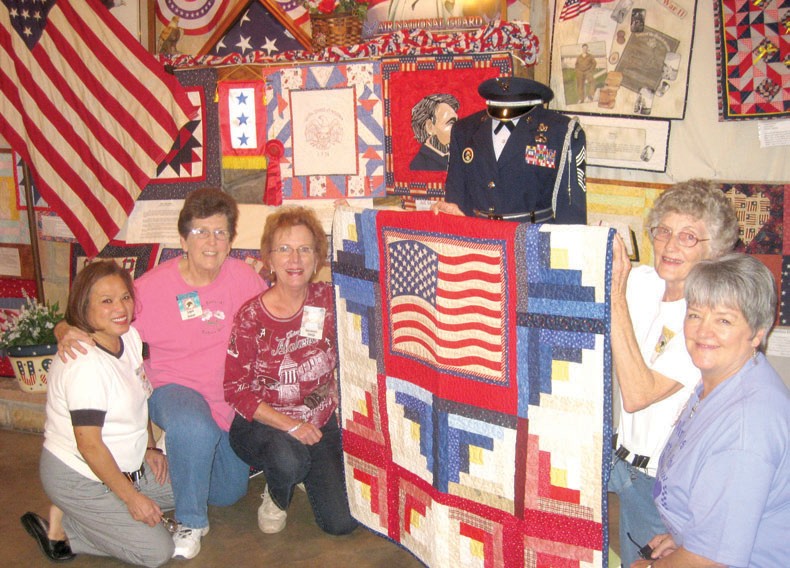 Members of the Blount County Quilters Guild display patriotic quilt (foreground) and quilted patriotic wall hangings (on wall in background), which were a part of the Quilters Guild Covered Bridge Festival exhibit. Shown (from left) Diep Jones (pronounced “Zip”) of Highland Lake; Joyce Foster, Ashville; Susie Smith, Straight Mountain; Ruth Davis, Hendrix; and Kay Calamusa, Dallas-Selfville. The wall hangings are part of a touring exhibit of about 50 two-foot square pieces from all over the country. Each piece bears a note telling who made it, what military person or occasion is being honored, and special significance of the design elements. The large, single-bed size quilt being displayed was made by Susie Smith. It was presented to Nomi Cook of Blount County in honor of her son Terry Bunch, who was wounded in Afghanistan as he tried to save another injured soldier’s life. Bunch is now recuperating from his injuries at a military base in Alaska. The patriotic exhibit was viewed by 343 people during the Covered Bridge Festival Friday and Saturday. Donations received will be used to buy material to make more quilts for veterans and their families. Guild president Joyce Foster said the group meets every Tuesday from 10 a.m. until after lunch to work on projects together and that individual visitors or small groups are welcome to drop in at any time. Larger groups are also welcome, but should call Foster in advance at 594-3513 in order for adequate preparations to be made. The guild is known for its many charitable activities. Foster said a current objective is to expand the number of college scholarships for county students beyond the three it now provides. – Ron Gholson