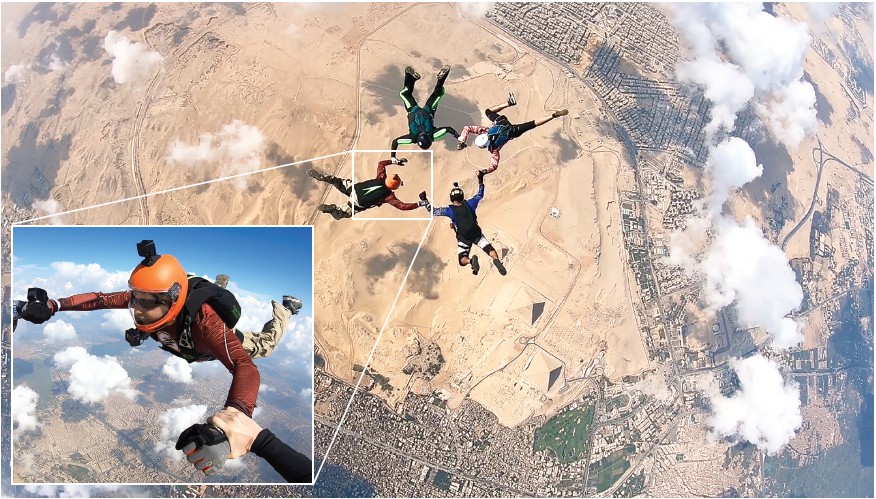 “I never dreamed I would get to see the pyramids, much less fly over them.” These words expressed by Oneonta’s Daniel Warden pretty much sum up his thoughts after having the opportunity of a lifetime to skydive over the Egyptian pyramids in October.

On Oct. 18, Warden headed out on a 26-hour trip to fulfill a lifelong dream. He would join 139 people, including four others from Alabama, from around the world to experience something most people only dream about – seeing the great Egyptian pyramids. After spending a day land scouting and determining where the skydivers would land on Oct. 20, the scene was set.

The group of 140 skydivers gathered at an Egyptian military base and loaded onto two C-130 planes.Although it rarely rains in Egypt, the skydivers had to battle the elements, which delayed some of the jumps. Each skydiver eventually made five jumps over a three-day period.

Due to bad weather information, Warden landed off course in the desert. Luckily, he was able to “hail” a camel wandering around in the desert and ride it back to the base. He described that experience as being “very surreal.”

Warden astride the camel he “hailed” after landing off course in the desert.

After being able to walk up and touch the pyramids, Warden said he was amazed at the sheer size of the blocks. He was also impressed with the engineering and how the builders were able to move the massive blocks.

Warden took his first jump 13 years ago. He said, “I knew I wanted to become an instructor after the first jump.” He put it on his bucket list.Soon the bucket list was on the back burner, but as he approached age 40, Warden knew he must take action to complete this item on his list.

Warden quit his weekend job approximately 18 months ago and dedicated weekends to begin meeting the requirements to become a certified teacher. Before he could start taking the classes, Warden had to have 500 jumps. That requirement was soon met; he enrolled in the instructor class and, finally, in August 2019 Warden achieved his goal of becoming a certified instructor.

Now, as an advanced free-fall instructor, Warden’s days are filled with teaching others how to skydive. He pointed out that he is not a tandem instructor, but enjoys spending time as a tandem videographer. His future bucket list items include skydiving in Russia and Puerto Rico.

Although he knows that skydiving is not for everyone, he said he thinks everyone should experience skydiving at least once in his or her life, even if it is a tandem jump. Is it safe? Warden, who considers himself a statistical person, said that technically skydiving is safer than a person getting into their car and going to Walmart.

Warden is extremely grateful for the event coordinators who allowed him to participate in an experience such as this and encourages everyone to consider skydiving. He followed up by saying. “It’s the best thing you can do on this planet.”