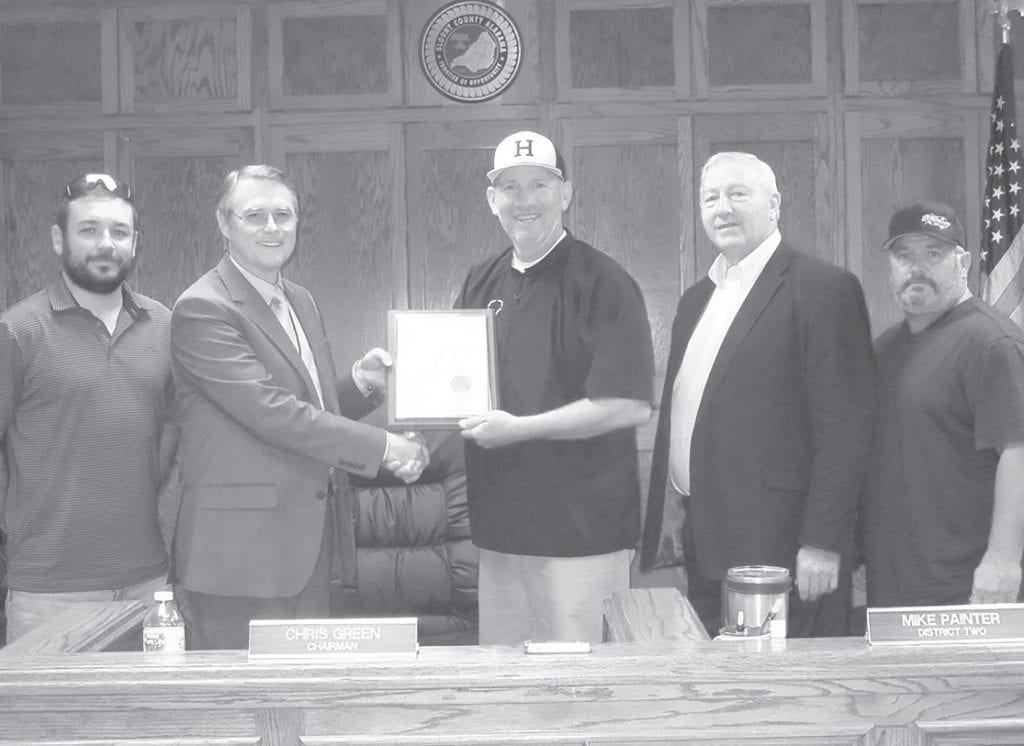 Sine qua non for a Blount County state championship season – the coach’s appearance before the county commission to receive its resolution of congratulations for excellence – in this case for the Hayden Lady Wildcats’ 2019 softball championship. Front and center holding the plaque and looking happy is Hayden coach John Simmons. Did somebody whisper “dynasty?” during the recounting of the team’s stats and prospects?

The Blount County Commission conducted two public hearings at the beginning of its June business meeting: one dealing with renewal of an Otelco franchise agreement for provision of cable television service, and one concerning application for a Community Development Block Grant for road and drainage improvements on Black Road, Mt. Hebron Road, and Mount Road in District 2.

After questions from the public on the Otelco franchise were answered, the commission voted to rework the current agreement, reducing its length from 20 years to three years, and increasing the franchise fee paid to the county monthly by Otelco from three percent to five percent.

Terry Acuff of Community Consultants, grant manager for the CBDG application, reported that Blount County would reapply for the same competitive grant this year that it applied for but did not receive last year, with improved prospects for selection this year. The grant is for $450,000, with a 10 percent county match required. It would be used primarily for road and drainage improvements on the named roads. The grant requires the area to which it applies to be at least 51 percent low and middle income. Extensive work in the form of house-to-house surveys was conducted last year to meet that requirement. Mulberry Fork fish kill

Blount County Emergency Management Agency director Don Roybal updated the commission on facts concerning an extensive fish kill on Mulberry Fork River on June 6, resulting from a spill of partially-treated wastewater from a Tyson Foods-owned chicken-processing plant near Hanceville. Discussion centered on whether the discharge into the Mulberry River was via a pipeline emptying directly into the river, or whether the discharge occurred into a tributary creek and thence into the river, as had been initially reported. Probate Judge Chris Green asked Roybal to determine the exact method by which the river was contaminated, suggesting that it might have implications for Tyson’s Blountsville plant. That plant’s wastewater permit is currently under review for renewal by the Alabama Department of Environmental Management (ADEM).

Update: ADEM has just posted on its website a request for public comments concerning renewal of Tyson’s wastewater permit for the Blountsville location, which means the renewal review has entered its active phase. See article on p. 2. Garbage pickup update

District 1 Commissioner Allen Armstrong reported that initial confusion during the transition to the new residential garbage franchisee Republic Services has begun to moderate, with fewer calls from customers with sign-up problems, or trash receptacle delivery problems. County administrator John Bullard agreed that the number of calls to the commission for assistance has also declined, and that the overall situation is improving. District 2 Commissioner Mike Painter questioned whether Republic’s poor call center performance has been corrected yet. The call center provided inaccurate and conflicting information that contributed substantially to customers’ confusion and frustration during the transition. No reassurances that problems have been solved was forthcoming from Republic’s representative at the meeting.

On the commercial side of the garbage pickup arrangement, the standoff between Republic Services, the immediate past franchise holder for commercial waste disposal, and Santek, the new commercial pickup franchisee, has apparently not been resolved, if the two companies’ representatives’ non-assent to Green’s question concerning progress toward a resolution is any indication.

The problem is that Santek’s contract grants an exclusive franchise to collect and dispose of all commercial refuse in Blount County, while a number of businesses have pre-existing contracts with Republic and other waste contractors, a situation at odds with Santek’s grant of exclusivity. The commission voted to send a letter to all known business accounts in the county explaining Santek’s exclusive franchise for commercial garbage pickup, and notifying them to switch to the new provider, Santek, when their existing contract with any other waste contractor expires. Resolutions

• authorized the commission staff to mail annual bid requests in early July to be opened July 31.

• approved reimbursement from the general fund to district road budget for expenses incurred from February flooding damage and March tornado damage; general fund will be reimbursed when FEMA reimbursement check is received in the coming months.

• approved a quote of $1,800 from Stream South for routers to provide wireless transmission of Covered Bridge camera signals to 911 center, with an additional annual maintenance fee of $1,200.

• voted to reject requests for proposals received for sewer line repair at the Blount County jail; work will be performed by force account (in-house) at significant cost savings.

The grand opening of King’s Bend Scenic Overlook will be Monday, June 24, at 9 a.m. at the site of the old U. S. 231 bridge over the Locust Fork River just north of Cleveland. The public is invited.