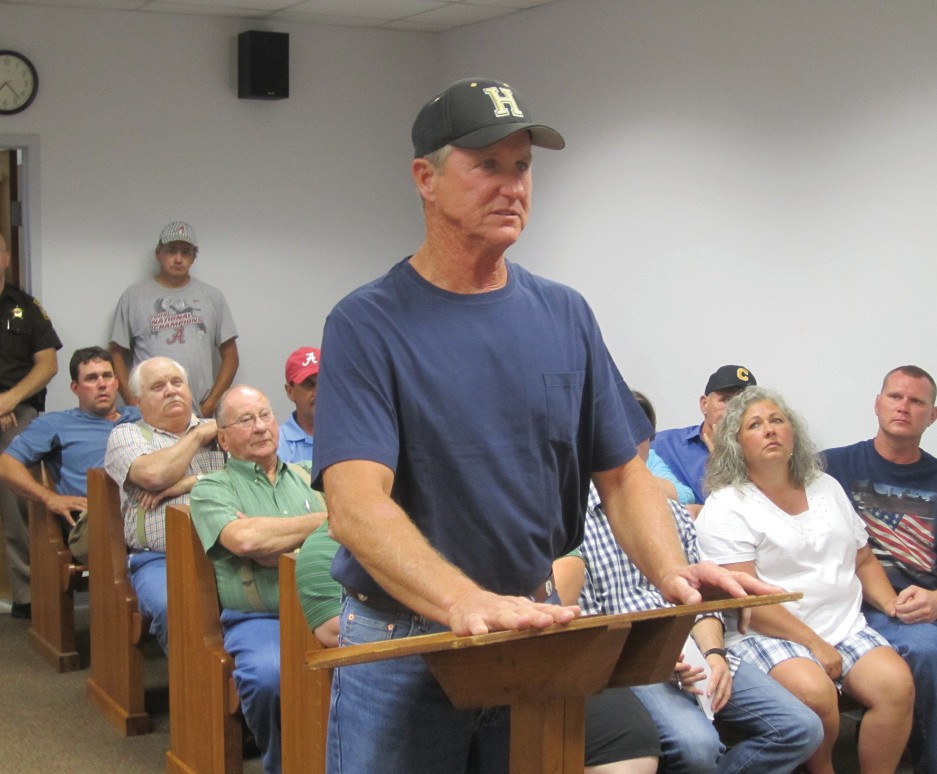 Landfill owner/operator Bud Adams to Blount County Commission: “If I thought it (expanding the coverage area) would hurt Blount County, I wouldn’t do it.”

By a count of 15 in favor to two opposed, speakers at the June 19 public hearing supported B&B Tire Landfill’s request to expand its coverage area to include four additional states outside Alabama. If the commission subsquently approves the request, as recommended by the Solid Waste Authority, B&B will be authorized to pick up scrap tires, nearly half of which will be recycled, from sources in Georgia, Kentucky, Tennessee, and Mississippi, in addition to Alabama. B&B Tire Landfill is located off county road 9, between Sugar Creek and Bangor.

The hearing lasted barely 30 minutes as few of the 17 speakers took the full three minutes alloted for them to speak. Several of those in favor spoke very briefly, like Clint Sherrill, residing on county highway 9 near the landfill, who said simply, “I’m 100 percent for the landfill.” He then pointed out that he helped from time to time in spraying to control mosquitoes, and that the landfill is a “good operation.”

Others echoed similar sentiments with several speakers pointing out the benefits to the county and its citizens B&B provides in the form of jobs and tax revenues. A number of those speaking in B&B’s favor lived on county road 9, near the landfill.

Bud Adams, owner and operator spoke briefly on his company’s behalf, inviting the public to come and observe the operation at any time, asking only that they stop by the office to be accompanied. He said one oftencited objection to landfills is that they cause property values in the surrounding area to decrease. He said he has checked values in the county revenue office for properties in the area near the landfill, and they had showed a steady increase over the last few years. He said his company has never had a citation for violation of ADEM regulations in 15 years of operation.

“If I thought this would hurt Blount County, I wouldn’t do it,” he said.

Daniel Blackwood, a Trafford resident who spoke against granting the B&B request, asked a question: “How would you feel if your neighbors threw their garbage over the fence on to your property? That’s basically what’s happening here with other states trucking their trash into Blount County.”

Arthur (Buddy) Self, also from Trafford and opposed to the landfill’s coverage expansion, appealed to commissioners: “If you feel you must approve it, make’em pay for it,” he said.

In recommending approval of the request in a letter to the county commission, the Solid Waste Authority made the following points:

•The request will not expand its permitted capacity; in fact, even if tonnage doubles as a result of coverage expansion, the company will still be well under its 100-ton-per-day permit limit.

•Additional tonnage will provide increased revenue to the county – potentially as much as $20,000 or more a year.

•Impending ADEM approval to expand B&B’s acreage will provide the landfill ample capacity for disposal for many years, notwithstanding the increase in operating tonnage.

•Nearly half of the increased tonnage of tires will never see the landfill, but will be sold to retread and vulcanizing companies for recycling. The county still receives revenue on them, however.

A commission vote will be required to give final approval to B&B Landfill’s request. It is included on the agenda for the July 9 commission business meeting.