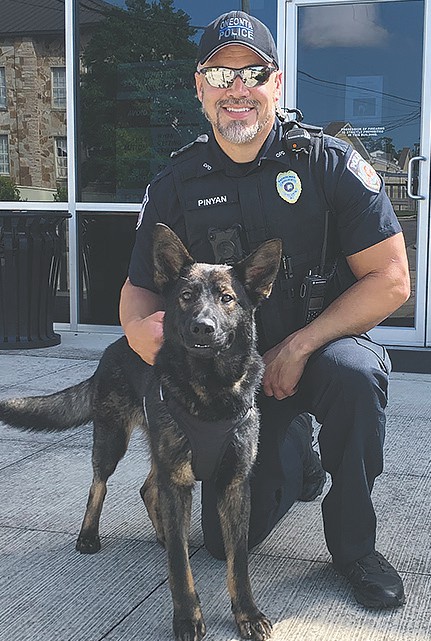 Do not be fooled by his name. Boogieman is everything but. The three-quarter German Shepherd, one-quarter Malinois lay docilely, working on his chew toy inside the Oneonta Police Department. “He doesn’t have a mean bone in his body,” explains his handler, Officer Ryan Pinyan (pictured above).

Boogieman is the newest addition to the Oneonta Police Department after a six-year gap of not having a K9 serve the city. Last fall, Pinyan was on his way to begin his shift when he noticed a sign-up sheet for officers who might be interested in having a K9 partner. He signed his name, but never heard anything back due to lack of funding in the city budget.

Undeterred, Pinyan approached Oneonta Police Chief Charles Clifton and explained that he really wanted to see this happen. “Well,” responded the chief, “if you can find a way to come up with the funds to make this happen, we’ll present it to the Mayor and Ed Lowe and see how we can do this.”

In the following months, Pinyan reached out to several individuals and businesses in Oneonta for assistance. He successfully acquired all the needed funds, raising more than $10,000 to make the new K9 program a reality.

“It cost $4,000 for his training, for his narcotics and tracking,” Pinyan explained. “He’ll be able to track down criminals, elderly citizens with dementia, and children who come up missing, but he won’t be a bite dog. He will not be taught to be mean.”

Boogieman did, however, show the drive needed to be successful in the field. And it’s taken a village to get Boogieman to Oneonta. “He was purchased by an individual through the trainer and donated to the department,” Pinyan said. All the donations Pinyan collected have been used for Boogieman’s needs including veterinary care and the cost to outfit Pinyan’s cruiser so Boogieman can ride.

“He started riding with me on Monday, July 27, so everyone in the city will be able to see him out and love on him.” Once their shift is over, Boogieman will go home with Pinyan. He has a kennel outside and every time Pinyan goes to work, Boogieman goes, too.

“If I go to the store, he goes with me. We’re together 24/7,” Pinyan explained. “At any time I could be called out to assist with tracking someone running away, or a criminal, or someone who’s escaped from the jail. Even in the middle of the night, so this is actually a 24/7 job. Once he completes his training, we’ll actually be able to get him out so we can do our job.”

Boogieman still has a bit of training to go. Once’s he’s done, he’ll be sworn in like any other officer. Oneonta residents will see him out during community events. He’ll be able to interact with children and be readily available for pats and love. “I actually took him to the high school graduation a few weeks ago and let him get around the public, just trying to introduce him to people. A lot of people came up so excited that we now have a K9 for the city.”

When asked how Boogieman is fitting in with the rest of his family, Pinyan shared that they are all excited to have a new addition. “My son,” he laughed, “is hysterical. He woke me up yesterday after I got home from work and said, ‘Are you ready to go get him Daddy?’ Before I even got out of bed the next morning, my son came in again and said, ‘He’s okay, Dad. I checked on him.’ My oldest daughter hasn’t met him yet, but she’ll love him.”

Pinyan’s decision to become a police officer was an easy one. He said he’s always felt called to serve. One of his main concerns is the rampant drug problem in Blount County. With his new partner, he feels he can have a positive impact on the community by keeping young people off drugs.

“A lot of people don’t think we have a drug problem,” he remarked. “But, they don’t see what we see everyday. I’ve seen children overdose and not make it. Having children of my own, it sits hard on my heart, that could actually be my children one day. There’s no dollar sign for a life, so if having Boogieman’s tracking can save an elderly person with dementia who has wandered off, a child’s life, get individuals off the street and incarcerated so we can get them help, it’s worth it.”

Pinyan has always wanted to help people and follow in the footsteps of his father who was an Alabama State Trooper. When people would approach his father and thank him for his service, it steered Pinyan towards a career as a public servant as well. “I’ve just always wanted to help people,” he said. Now with Boogieman on his team, he can help even more.