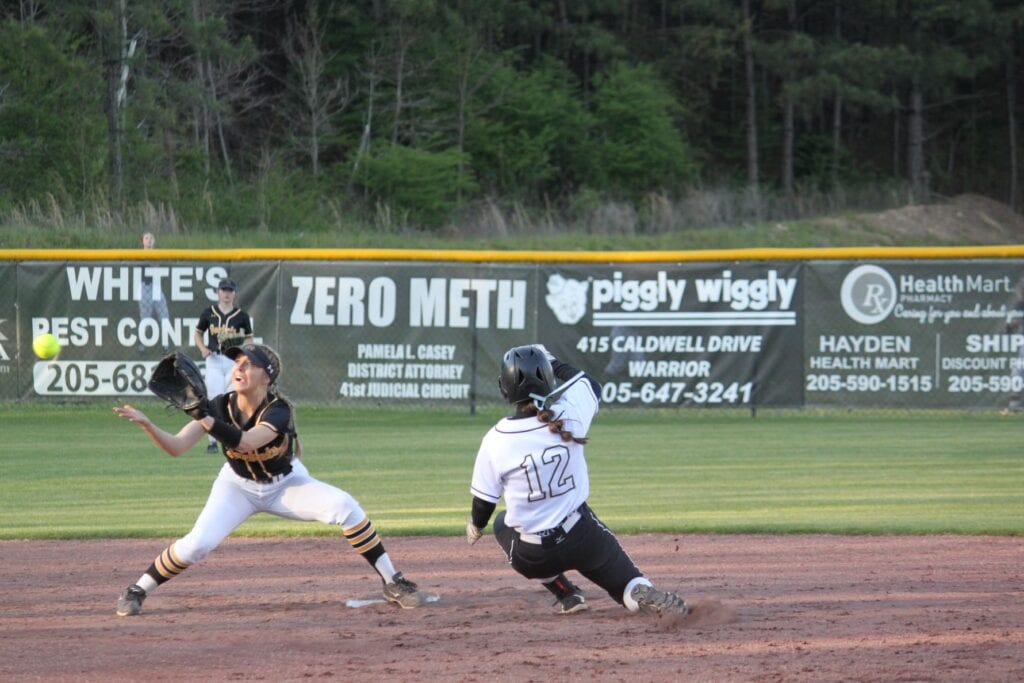 In 2A Area 11, the Locust Fork Hornets finished the season as the top team and are hosting their area. They will play fourth-seeded Southeastern at 3:30 p.m. Monday while second-seeded Cleveland plays West End, the number three seed, at 5:30 p.m. That championship game will be be played at 4:30 p.m. Thursday, May 6.

Susan Moore and J.B. Pennington will travel to Holly Pond for the 3A Area 13 tournament. Pennington, the number four seed, plays top-seeded Holly Pond at 3:30 p.m. Monday. Susan Moore came in with the second best area record and will play the area’s number-three seed Brindlee Mountain at 5:30 p.m. Monday. The championship game starts at 4:30 p.m. Thursday, May 6.

Oneonta will travel to Etowah County for the 4A Area 10 tournament while Hayden will host the 5A Area 12 tournament. Those brackets were unavailable at press time. All brackets will be posted on the website.

The Eagles could not get their bats working as they went scoreless against the Hornets last week. Pitching was strong for both teams with Locust Fork giving up two hits while striking out five. The Eagles gave up four hits striking out six. Zoe Payne and Grace Benson managed the only hits for the Eagles with two singles. Savannah Neely, Hannah Payne, Jenna Adams, and Miranda Freeman each had one hit for the Hornets. Ashley Maddox got the loss going four innings while Amanda Richelderfer came in for two innings of relief during the middle of the game.

In last week’s game, Appalachian lost the lead late falling to Ohatchee. Ohatchee’s Kylee Barnes hit a grand slam in the sixth to put the Indians up 8-7. All three Eagle pitchers saw mound time. Maddox started the game and gave up four runs on three hits striking out three in four and a third innings. Sarah Metcalf pitched one and two-thirds innings giving up one run on one hit and striking out one and walking two. Richelderfer pitched one inning giving up three runs on two hits while walking four. Kaylan Martin led the Eagles going 3-for-3 at the plate with a triple and two singles. Payne had two doubles and Taylor Woodard had one.

Martin led the Eagles with four RBIs as they defeated the Ohatchee Indians 15-4 Monday night. Stormy Stidham and Martin led the Eagles with three hits each, while Taylor Woodard, Sophie Latta, Payne, Jordan Henderson, Dalys Day, Gracey Gulledge, and Grace Benson also managed hits. Maddox got the win, surrendering three runs on four hits over three and two-thirds innings, striking out three and walking one. Richelderfer threw one and one-third innings of relief giving up one run on two hits and walking three.

The Wildcats built a 9-0 lead before the Blue Devils scored four runs in the fifth inning. Hayden added two more in the sixth going on to win 11-5 on the road last Thursday. Ansley Armstrong drove in four of Hayden’s runs with home runs in the first and third innings. Olivia Armstrong drove in three with a homer in the sixth inning. Miah Simmons got the win. She allowed five runs on six hits through six innings. Aubrey Gunter pitched the final inning.

Last weekend, the Wildcats played in the Hoover Classic. Their first game was Friday afternoon against Hewitt-Trussville who went on to win 8-2. Lindsey Smith drove in one Wildcat run and scored the other. She went 2-for-3 with a double. In game two later Friday afternoon, the Wildcats fell 1-5 to Central Phoenix City. Smith, Taylor Yeager, and Alyssa Jinright each had a hit. Yeager drove Smith in for the Wildcat run in the sixth.

On Saturday, Hayden started the day with a game against Austin. In a close one, Austin squeezed out a 7-6 win. Smith led the Wildcats at the plate driving in two runs on two hits (a double and a triple) scoring two runs. In Saturday’s second game, the Wildcats lost 3-7 to Hatton. Yeager and O. Armstrong both had two hits with Yeager driving in two runs and O. Armstrong scoring one. The Wildcats won their final game in dramatic fashion. With Oxford up 1-0, Becca Benton drove in two on a home run giving the Wildcats a 2-1 victory.

Yeager’s success at the plate plus Painter’s success in the pitcher’s circle helped the Wildcats beat Pinson Valley Monday. Yeager went 3-for-4 with four RBIs in Hayden’s 12-2 win. Painter pitched three and a third innings and gave up two runs on two hits striking out four. Gunter closed the game for the Wildcats. Both Yeager and A. Armstrong homered in the game. A. Armstrong’s two-run shot came in the fourth inning while Yeager hit hers in the fifth.

Despite being out hit 14-10, Oneonta held off Clay-Chalkville for a big road win last Thursday. Aaliyah Byrd drove in three runs on two hits (home run and a double) to lead the Redskins at the plate. Kylie Wilson was 2-for-3 and scored twice. Emma Jo Devaney and Kylee Smith both finished the game with two hits, too.

Friday afternoon, Oneonta headed to Locust Fork for games against the Hornets, the Panthers, and the Bulldogs. Oneonta fell to Locust Fork 1-7 in game one. Payten Burns drove in Smith for the Redskins’ only run of the game.

The Redskins won game two against the Cleveland Panthers with a walk-off single in the sixth. With the game tied at seven, Grayson White singled on a line drive to center field sending Mattie Jackson home to give the Redskins an 8-7 win.

In the final game of the day, the Redskins shut out Susan Moore 8-0. Ashtyn Sligh allowed just one hit through five innings. She struck out five and did not walk any. Byrd finished with a couple of hits and two runs to lead the Redskins at the plate.