Plenty of choices on next week’s ballot 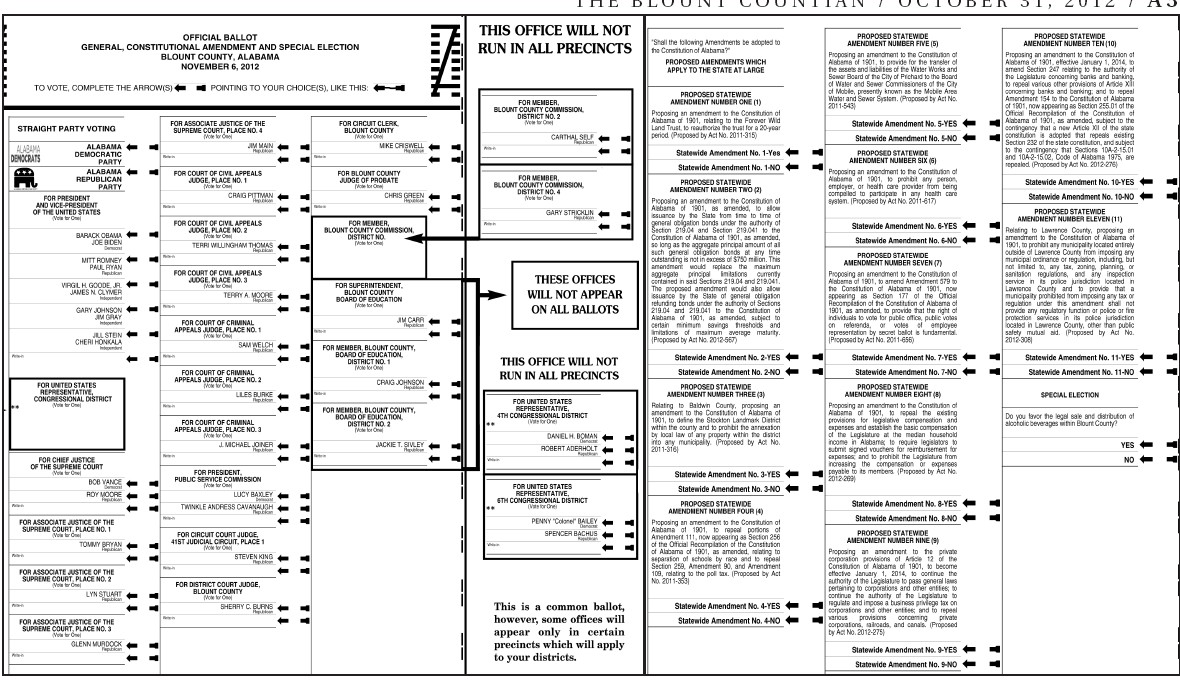 The Nov. 6 election ballot this year presents voters with a wide array of choices to be made – from national to state to county offices, plus a a virtual buffet of constitutional amendments to puzzle over. We’ll try to prepare you below for the offices and amendments you’ll be faced with on Tuesday next week. FRONT OF BALLOT National Office

President and Vice-President of the United States

United States Representative (4th or 6th district, depending on your residence) State Offices

BACK OF BALLOT Proposed statewide amendment No. 1

Whether to extend payments to the Forever Wild Land Trust for the next 20 years, ending in 2031-2032. Forever Wild buys land to increase the size of state parks, wildlife management areas, and creates new recreational trails and nature preserves. Forever Wild receives the majority of its funding from interest on natural gas royalties and matching federal grants. Proposed statewide amendment No. 2

To preserve historic value of Stockton Landmark District in Baldwin County, amendment defines the district and prohibits annexation of property within the district into a municipality. Parts of Stockton may still be annexed through unanimous consent of owners. Proposed statewide amendment No. 4

Removes language in Alabama Constitution relating to racial segregation in schools and language regarding the imposition of poll taxes. Described as “a wolf in sheep’s clothing” by the Alabama Education Association. Proposed statewide amendment No. 5

Prohibits mandatory participation in any health care system. Prohibits the imposition of fines or penalties upon health care providers for accepting direct payment for lawful health care services. Amendment 6 is Alabama’s attempt to reject the mandates contained in the federal Patient Protection and Affordable Care Act. Proposed statewide amendment No. 7

Guarantees the right of individuals to vote for public office – and to participate in public votes on referenda or votes on employee representation – by secret ballot. Designed to protect citizens from threat or coercion when deciding how to best represent their interests. Proposed statewide amendment No. 8

Repeals existing laws regarding the compensation and expense reimbursement of members of the Alabama State Legislature. Ties the annual compensation of legislators to median annual household income in Alabama. Ensures that legislators’ pay rises and falls with the income of the people they represent. Proposed statewide amendment No. 9

Replaces outdated language concerning the categorization of certain corporations. Continues the authority of the Legislature to pass general laws pertaining to corporations and other entities and to regulate and impose a business privilege tax on them. Does not impose new taxes. Proposed statewide amendment No. 10

Revises and recompiles sections of the Constitution on banks and banking. Prohibits the state from owning stock in any bank or banking corporation.