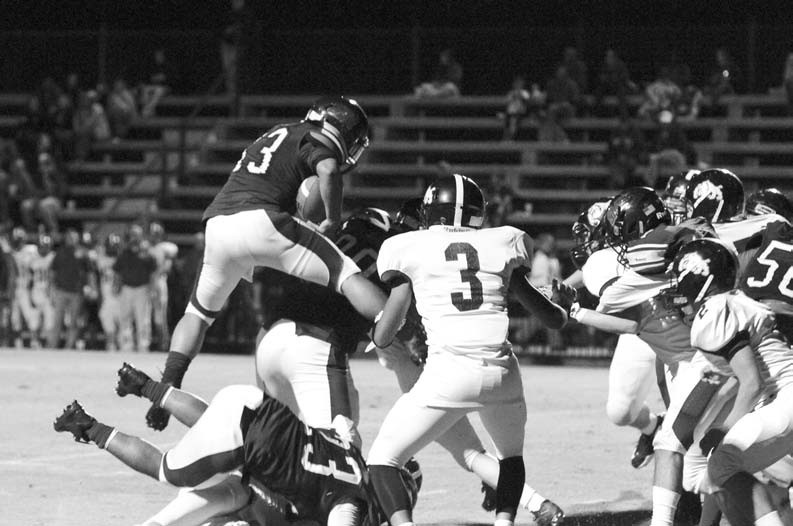 Last week was not a great week for our teams, more on that in a minute, but it did provide some clarity – or a good dose of reality, at least.

All eight Blount County teams faced a region opponent from outside the county and the results weren’t good as only Hayden, Locust Fork and Susan Moore came away with victories.

Appalachian and Southeastern have been effectively eliminated from the playoffs.

Susan Moore’s big win last week kept the Bulldogs alive but they must continue to win this week against a tough Fultondale team.

Oneonta is still alive but just barely after last week’s tough, overtime loss at Hokes Bluff. The Redskins must beat Jacksonville this week to stay in contention.

Cleveland and J.B. Pennington lost last week and are probably not going to win a region title but both are in line for home playoff games.

Locust Fork is still alive for a home playoff game and could challenge for the region title.

Hayden survived a shootout with upset-minded Springville and now must travel across I-65 to meet traditional rival Corner. The Wildcats have to keep winning to stay in the hunt for the region title, although a win this week would guarantee a playoff appearance.

So, to sum it up, if you want to make the playoffs – or hope to host a playoff game – your team needs to keep winning. That’s shocking to hear, I know.

The Eagle offense was almost completely shut down last week by an undersized but quick and athletic Donoho defense. This week, the Eagles face a Woodville defense that has struggled to even slow down the better offenses of Spring Garden and Cedar Bluff and didn’t do a whole lot better against a very average R.A. Hubbard team. Woodville’s defensive front has been overpowered and run over by just about every offensive line on the schedule, so far. The Eagle defense had all kinds of trouble stopping the run last week against the speed and quickness of the Donoho backs. Woodville doesn’t have that kind of speed but they do have some size (avg. 225 lbs.) and can throw the ball a bit, when needed.

Next week – Region road games for each as Woodville goes to Valley Head and Appalachian travels to Talladega County Central.

The Eagles like to sling the ball around and so do the Mustangs.

Decatur Heritage got down big early last week before roaring back against region-leading Addison. Southeastern got down early at Lynn and never recovered – although the Mustangs did make some plays. Decatur Heritage came out of nowhere last year to make a run to the semifinals before falling to Cedar Bluff. The Eagles lost a lot of linemen from that team but there is plenty of skill position talent returning. The Mustangs and Eagles will do a lot of the same things on offense but Decatur Heritage features big bodies up front that average 230 lbs. Addison jumped all over the Eagles last week, forcing six turnovers and building a 26-7 lead before having to hang on down the stretch. The Eagle defense has had trouble stopping the run at times and the Mustang offense has shown signs of life the last few weeks.

Locust Fork got a big win last week against Holly Pond while Cleveland wouldn’t mind forgetting last week’s trip to Tanner. The Hornets got down in the first half but then roared back in the second half for a very big win against Holly Pond. The Hornet running game will be the key this week for the visitors. Cleveland must limit the Hornet big plays and get off the field. Chris Musso’s team will merrily pound away at the Panthers all night long, if given the chance. Cleveland must get back up after last week’s tough trip to Tanner – something that isn’t always easy to do. The Panthers had trouble slowing down the explosive Rattlers, something just about all 2A teams would have problems doing, but the Panther offense had a bad night with turnovers and mistakes. Cleveland has to clean things up this week and make some plays against a Hornet defense that has given up big yards and explosive plays at various times this year.

Next week – Big region road games with playoff implications as Locust Fork is at Hanceville and Cleveland travels to Tarrant.

Big game – especially if the Tigers want to play at home in the first round of the playoffs.

The Tigers gave Fultondale all kinds of problems last week but the Wildcats were able to shake free in the second half for the win. Now, if only the Tigers can get healthy… Vinemont has always been a running team but the Eagles have shown the ability to make plays in the passing game this year – Vinemont threw for more than 300 yards against Locust Fork. That could be cause for concern because the Tiger defense has given up more than its fair share of big plays this year. The Tigers got a great effort on both sides of the ball from Travis Haynes and Travis Cleveland had a very good night throwing the ball. Getting Bailey Dempsey back healthy would take some of the receiving pressure off Tucker Heptinstall and Vinemont has struggled on defense against better offenses this year.

Fultondale had problems with Pennington’s spread offense and now must face the ground-and-pound of Susan Moore. Against any team not named St. James, the Wildcats have averaged a little over 52 points per game. Fultondale has speed throughout the skill positions and good size (avg. 235 lbs.) up front. Depth is not great but that hasn’t been a problem yet for the Wildcats. Susan Moore held onto the football last week and thoroughly dominated Hanceville. The Bulldog running game produced three players – Angel Duarte, Anthony Cervantes and Andrew McEvoy – with more than 100 yards and two touchdowns each. Duarte provided a big play on defense with his 100-yard pick-six. The Bulldogs must pound away and move the chains this week to limit the snaps of the dangerous Fultondale offense.

The Redskins need to knock off the undefeated Golden Eagles to stay in the playoff chase.

The Golden Eagles were a bit flat last week and found themselves tied 7-7 with Ashville at the half. The home team – it was Jacksonville’s homecoming – came to life in the second half and put away the Bulldogs but it wasn’t easy. Oneonta was bad in the first half at Hokes Bluff but came to life in the second half before falling in overtime. To beat Jacksonville, you have to stop – or at least slow down – the Golden Eagle running game. Jacksonville is led by Trey Richmond (5’11, 170 Sr) and he rolled up 165 yards and two touchdowns against Ashville last week. Jacksonville has lots of size up front (avg. 250 lbs.) and this team has made plays on both sides of the ball each week this season, including a sack/safety last week in the second half to start the comeback against Ashville. Oneonta got a great game from Colton Walker and the running game last week but the Oneonta defense, particularly the front seven, simply has to play better this week if the Redskins are to pull off the upset.

Two programs that should meet every year – and this year’s game means a lot more because of playoff hopes…and maybe dreams.

I guess the Wildcat defense was due for an off night and that’s what happened in last week’s shootout win over Springville. The Tigers made a ton of bit plays against a Wildcat stop-unit that had been lights-out almost each week this season. Hayden needs to make sure the lights-out version of the Wildcat defense shows up this week because Corner’s Devne Daniel is as dangerous as TNT. The senior quarterback is a 6’1, 195-pound terror for defenses, just ask Oak Grove and Curry. He had more than 600 all-purpose yards and 10 touchdowns the last two weeks against those two – OK, admittedly the Tigers and Yellow Jackets aren’t known for defense. Hayden fired up the running game last week and put more than 500 yards on the Tigers and that is the key this week. The Corner defense has held up against bad offenses but hasn’t done much against better offenses. Look for the Hayden offensive line to try to work over a Corner defensive front that has size (avg. 240 lbs.) but not much depth. A win this week would secure a playoff berth for the Wildcats.