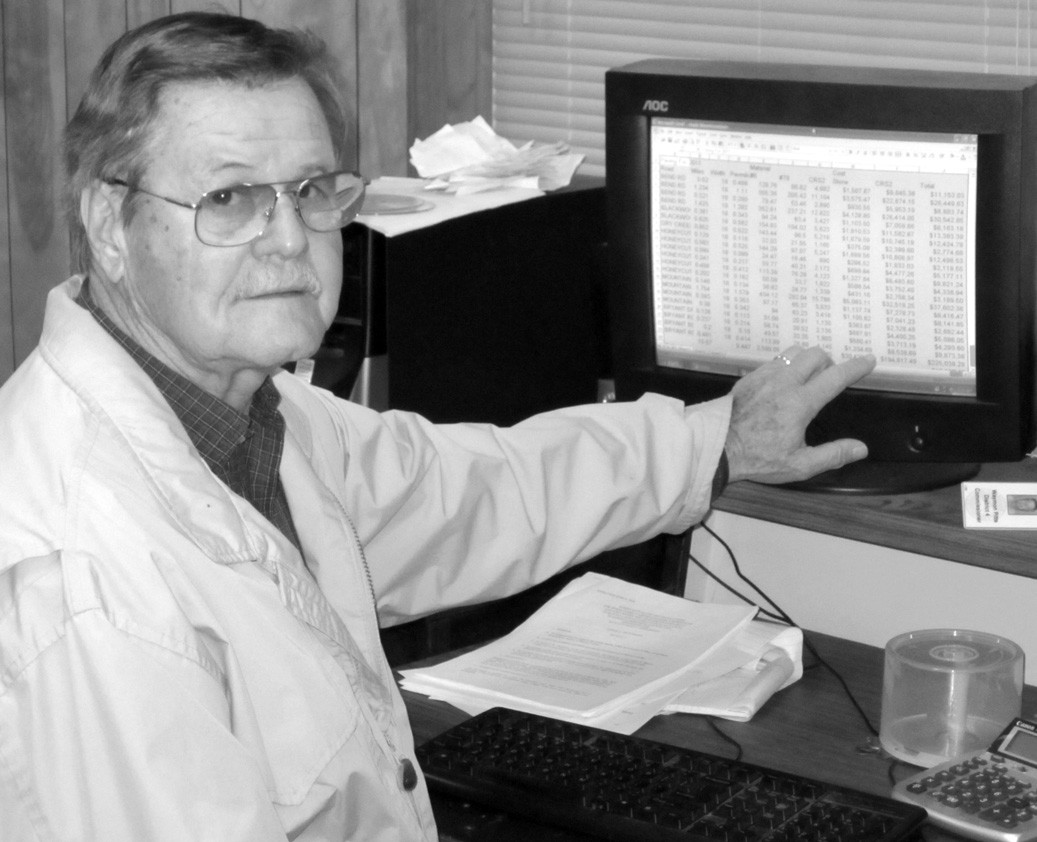 District 4 Commissioner Waymon Pitts points out the bottom line on the computer cost summary of 2011 repaving projects: $235,636.75 for 10.5 miles of road.

About 10.5 miles of the district’s roads will be resurfaced with tar and gravel by early this summer, District 4 Commissioner Waymon Pitts told The Blount Countian in an interview this week. The roads to be repaved are listed below.

Pitts said all roads will be “reclaimed” – referring to the process of plowing up existing pavement, in effect turning the road temporarily back to dirt before repaving. Once the roads have been plowed up, they will be graded and recompacted, with soft spots corrected before a new tar and gravel surface is applied.

The reclaiming process on all roads is scheduled to begin the last week of March, and will proceed through May. Paving will begin in late May or early June and continue for one to two weeks, depending on the weather, Pitts said.

Pitts said roads will not be closed except for brief intervals of no more than 20 minutes or so during the actual paving process. However, residents will have to tolerate dusty or muddy conditions, depending on the weather, for several weeks while roads are being plowed, graded, and otherwise prepped for repaving. Other road concerns

Potholes. “We work potholes more or less all the time in response to phone calls from people requesting pothole repairs,” Pitts said. “We tell the mowing crews to watch for them and report them as they see them, and then I ride these roads looking for problems that need attention. Most of the time we get to ’em pretty fast when someone calls in – by that I mean within a week or so. I try to call people back if there’s going to be a delay any longer than that,” he said. Pitts said pothole complaints average three to four a month.

Dirt roads. Pitts said the general procedure is to grade dirt roads twice each year, once in the spring and once in the fall. District 4 has about 20 dirt roads totaling 27 miles. Pitts said it’s important to work them when moisture conditions are optimal. Too wet and the road becomes a quagmire; too dry and it becomes a dust bath, he said.

Worst road problems: District 4 has two major road problems, neither of which has a good solution in sight, Pitts said. One is Center Springs Road south of Locust Fork, connecting Ala 79 with Armstrong Loop in the Wallstown area. The other is Berry Mountain Road, connecting U.S. 231 at Rosa to Ala 75 north of Oneonta.

Both are asphalt roads several miles in length and both are in deteriorating condition. Pitts said Center Springs Road would require about $215,000 to resurface; the tab for repaving Berry Mountain Road would run to $350,000.

“A couple of years ago, I thought I might be able to use tag-fee revenue to rework Center Springs Road. Then that didn’t happen. (Blount County voters overwhelmingly turned down the tag-fee increase at the polls. – ED.) Then last year, the Legislature was going to pass that bill for infrastructure improvements in the counties around the state. In Blount County, we were going to take the money and do one major asphalting project each year, rotating it from district to district. District 4 would have gotten the first share, and I wanted to use it on Berry Mountain Road, but then it didn’t pass the Legislature. So, as of right now, I don’t see a solution for either of those two roads.” Other District 4 concerns

Pitts said two nonroad projects are critical to the District 4 area. One is the sewer project for Locust Fork. A second is the need for public water for residents on Kiowa Road.

“Locust Fork desperately needs that sewer, and people on Kiowa Road don’t have water. Birmingham Water Works has been willing to work toward it, but we’ve still got to come up with money for a pumping station to get the water up to them,” Pitts said. Countywide early warning

“Something that really concerns me countywide is the general fund budget for next year,” Pitts said. “At best, we’ll have about the same amount of money as we have this year.” Pitts said ad valorem taxes are a major source of general fund revenues. Some people feel those revenues will lessen as a result of a general decline in property values.

“By April, we should be getting an idea of what revenues are going to be, and I hope we’ll at least break even,” he said. “But if we don’t, county departments need to be looking at ways they might be able to cut 5 to 10 percent from their current year budget.”