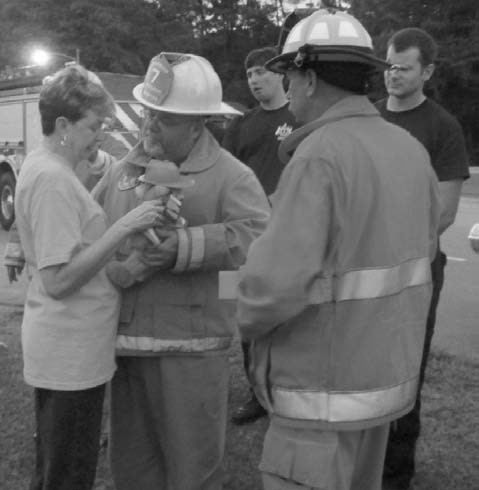 Earlier this month, Phyllis Ratliff, who is currently battling breast cancer, received an unexpected visit from ‘Cindy’ the pink fire truck and was able to sign the fire truck as many have done before her. During the month of October, Breast Cancer Awareness Month, Cindy makes her way around Alabama visiting those affected by the disease. ‘It was an amazing night to say the least,’ Ratliff said. Stephen’s Diner hosted a fundraiser for Ratliff by donating 10 percent of their proceeds from that night. She was able to enjoy her first full meal since her treatments began a few months ago. ‘While I was enjoying everyone’s company, they called me outside,’ Ratliff said. ‘When I got out there, the pink fire truck and a pink police car were there. This man walked up to me and told me he wanted me to know how many people cared about me. He gave me a Teddy Bear dressed in a pink firefighter’s outfit, and told me that if I ever needed a hug to hug that bear and know that when I did that they were all hugging me back. It was absolutely awesome.’ Fifteen years ago, Ratliff battled breast cancer and won, but she was diagnosed again in August. She has already undergone two rounds of chemotherapy and still has two more treatments.