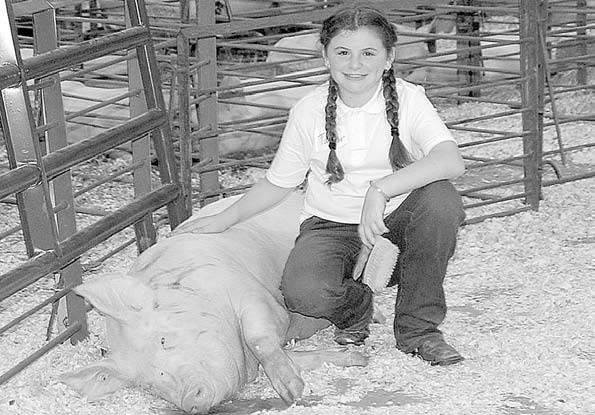 Winning Grand Champion at a 4-H competition is hard work. ‘Harold’ takes a break as his owner, Taylor Jenkins of Hayden Middle School, prepares him for auction. The Pig Squeal Show and Auction was conducted Saturday, April 22, at the Blount County- Oneonta Agri-Business Center in Oneonta. Barrows sold by the fifteen 4-Hers who competed sold for an average price of $1.47 per pound, ‘Which is great!’ enthused county extension agent Dan Porch. Reserve Grand Champion went to Clayton Boatman of Susan Moore Elementary. Showmanship top honor went to Tanner Nolen of Susan Moore. The top Junior Showman was Kaleb Self, of Susan Moore Elementary. Travis and Trey Cook of Susan Moore Elementary picked up the Donor Seeker Award by raising more than $1,000 for the event. Blount Countians supported the event by donating funds or buying a hog and one parent praised the event saying, ‘My son learned a ton – everything from animal care and pen maintenance to showmanship techniques. You couldn’t have slapped the smile off his face, sporting his ribbon!’ As for Harold, he was initially nervous from all the sausage and bacon biscuits being consumed around the arena (said the county agent, who’s an expert on hog psychology). But he recovered his moxie enough to take home the top prize!