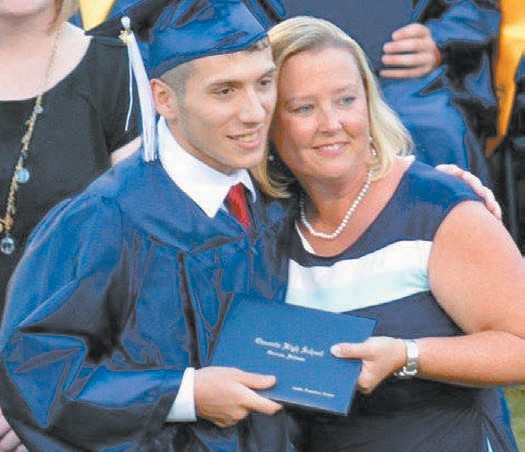 Piceno knew his grandmother’s days were numbered. She grew weaker and weaker as graduation day approached and the reality of her not being able to see him graduate became clearer and clearer.

Piceno has lived with his grandmother, Patricia Ann McAnnally, all of his life, and the bond between them was irreplaceable.

According to Piceno’s mother, Tabatha Jimmerson, “Nana has always been his rock, his security, his everything. When Noaha was just a baby, Nana would sit and talk to him for hours. I have never seen a connection that deep.”

In March, McAnnally became extremely ill and her health began to deteriorate quickly due to lung cancer. Despite treatment, it soon became evident that the reality of her recovering was slim. She grew weaker and weaker.

Knowing that her days were short, McAnnally told her grandson in late April that her last wish was for him to graduate.

With less than one month until graduation, Piceno buckled down on his studies and worked diligently to achieve that goal. Five days before graduation, there was concern that McAnnally would not live until graduation day or see her grandson graduate.

Upon being notified of the dire situation, OHS principal Lauren Wilson and guidance counselor Cilia Smith arranged to take the graduation ceremony for Piceno to his grandmother.

On May 25, they traveled to McAnnally’s apartment with Piceno’s diploma.

Wilson said, “He put on his cap and gown, and I was able to present his diploma to him at his grandmother’s bedside for her to see. Noaha had worked extremely hard, and I wanted his grandmother to see that his hard work had paid off. It was very rewarding to be able to show how we, as a school, were proud of him, as well as how proud his family was of him.”

Piceno graduated with his class on May 26. Sadly, his grandmother passed away on May 28, however, through the efforts of Piceno, OHS faculty, and the family, Jimmerson said, “He did it. She got her wish.”