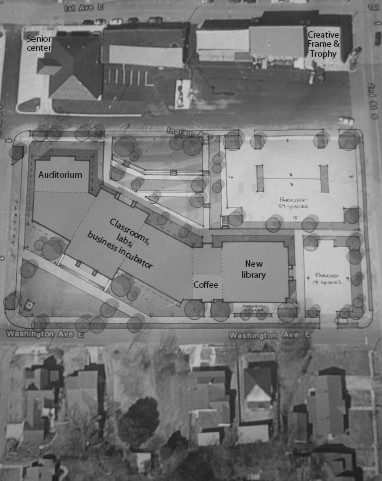 Shown above is a preliminary diagram – a “footprint”– of the proposed Wallace State Oneonta Campus Center. It would sit on the property now occupied by the Oneonta Public Library. According to this plan, the existing library would be demolished to make way for a 50,000-square-foot, two-story structure that would occupy a major part of the acre-plus lot. As proposed, the building will house a new library, incorporating, enlarging, and enhancing it as a part of the building’s college campus/ business incubator/public library and other multi-use functions. Careful thought is being given to providing adequate parking to a complex of this size. A central consideration in the choice of location, according to Oneonta city manager Ed Lowe, is the economic affect the campus will have on downtown development and its merchant community as students and others flow to it and through it daily.

Lowe said that in addition to preliminary architectural drawings and designs, planning is going forward to determine how to structure financing to bring the project to fruition.

“We’re reviewing our existing bond situation to determine where we stand relative to what we have to do. At the end of the day, we’ll have to do a bond issue to make this all come together,” Lowe said. He noted that the project will entail seeking funds from federal, state, and local sources, including grants and participation by partners including the county, the economic development community, the financial sector, Wallace State itself, and private sources yet to be identified. Although he did not name names, he indicated some partners are already on board, though no one is totalling up pledges yet (unless he is).

“I want the community to understand what kind of a commitment this is for the community,” Lowe said.“It’s too soon to project a cost based on the preliminary work done so far, but other projects similar to this I’d say have been in the $5 million range. Of course there are some things we can do to mitigate that – in-kind work and use of our own labor, and at some point as we move further along into plans and specifications, we’ll know exactly what we’ve got to do.”

Lowe added that in the not-too-distant future, the city will schedule a public meeting to solicit citizen feedback on the project when further plans, details, and visual representations are available.