STEVEN DORNING and JESSEE HALL were winners of the Fifth Estate publishing company book contest. Dorning resides in Blountsville, and Hall in Oneonta. The contest was sponsored by Blount County Arts Council.


JADE ALICIA SILCOX of Trafford graduated from Wallace State Community College in May 2009. She is the daughter of Leslie and Margie Terrell Silcox and graduated from Locust Fork High School in 2007. On the Wallace State dean’s list every semester, Jade was inducted into the Alpha Chi Tau chapter of Phi Theta Kappa international honor society in the spring of 2008 and graduated from the electroneurodiagnostics program with a 4.0 GPA, which landed her on the president’s list. She recently accepted a position at UAB Hospital as an electromyographer in the neurophysiology department and plans to pursue her bachelor’s degree in applied science at UAB. MILDRED WILLIAMS and DEBRA CHEEK display some of the 147 Christmas items collected for Blount County Department of Human Resources to give to Blount County children. Williams represented the Rose Garden Club which co-sponsored the drive with Blount County Memorial Museum. Cheek is employed with DHR and accepted the gifts for distribution. 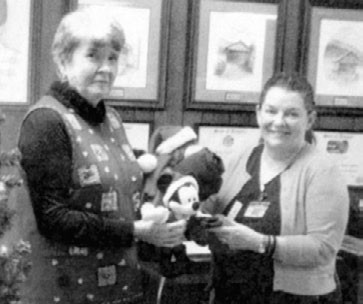