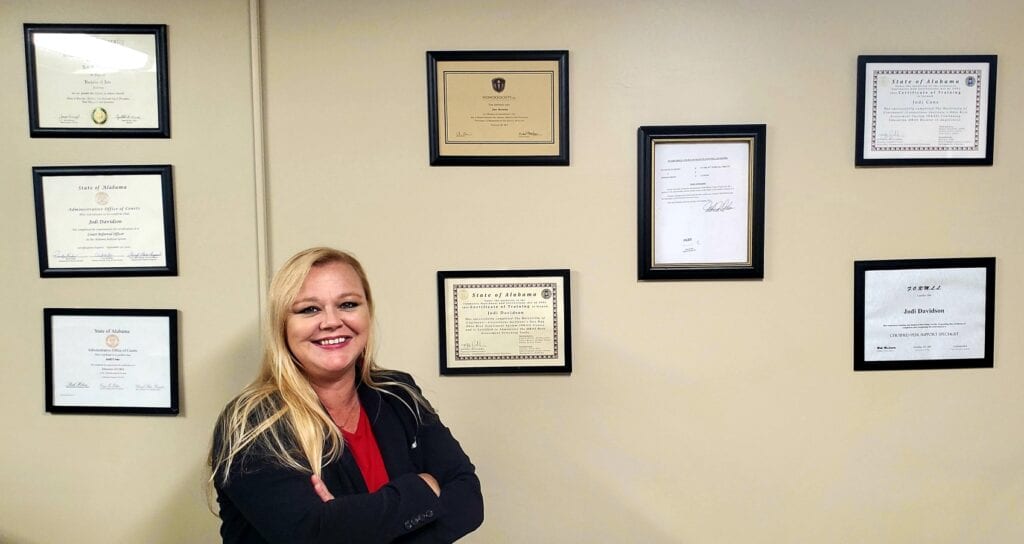 Whether you have or have not been following the Epidemic (and Beyond) series in the newspaper over the last several weeks, drug addiction is real, and it is destroying lives on a daily basis right here in Blount County. For those who want to turn their life around and live a drug-free life, it is possible. It is a minute-by-minute journey.

Today’s People of Blount County highlights someone who not only has maintained sobriety for 12 years, earned her bachelor degree, become an ordained minister, incorporated a Family Wellness Court and currently serves our community as the executive director of Blount County Community Corrections. Her ultimate goal is to someday become Blount County Drug Court judge.

Jodi Cone grew up in Hanceville. Her mother instilled a good moral character by having their family in church weekly, participate in band activities, and community service. Jodi’s goal at that time was to become a veterinarian. Her future was in front of her, open and wide, ready for her adult life to begin. However, Jodi’s life changed drastically during her sophomore year when she dropped out of school, “fell in love,” and became pregnant.

During this time her husband introduced Jodi to the life of drugs, and that soon became a way of life. Meth was her drug of choice, and like many struggling couples today, she and her husband maintained this lifestyle. Jodi was lost in a world built on highs and lows based on the amount of drugs she could obtain during this 17-year battle.

Domestic violence between Jodi and her husband gradually increased and was a very common component of this lifestyle. As Jodi struggled to fight back with protection orders, she filed charges, only to drop them later. After a particularly brutal incident, Jodi’s drug life spilled over into her children’s safety and well-being. Jodi became involved with the Department of Human Resources.

On the outside, people saw Jodi’s family as being normal. They were involved in activities such as sports, cheerleading, and church. Despite this, Jodi now looks back and admits she was not there for her two oldest children emotionally. Jodi had to make a decision.  In 2008, Jodi decided she had had enough. Tired of using, tired of sticking herself with needles, and tired of life without her children, Jodi sought help from lessons she had learned in childhood. She confided to her pastor about her drug use, although she minimized her addiction and usage at the time. He encouraged her to stay involved in the church and gain knowledge in the Bible.

However, addiction is not easily defeated, and she found herself using before Sunday morning services. Jodi said the demon of addiction had a 17-year hold on her, and it would take the mighty hand of God for her to surrender. Jodi approached her pastor and his wife after church and admitted she could not stop. The pastor found the elders and they immediately prayed for Jodi, broken and sobbing, to be released of her desire to use drugs. Jodi felt a peace inside her that she had not felt in many years. This feeling was better than any high she had received from any drug use.

That day as she was leaving church, her pastor told her “I’m so proud of you.” He then asked her if she was ready, and by the grace of God, Jodi took the first step into her new life.  She went home and cleaned everything out. She was going to be successful in her recovery journey. It wasn’t going to be easy. She remembers several people she had used with or supplied meth to coming to her home for drugs. Jodi held strong despite those “so-called friends” continuing to reach out to her.

One night, soon after making her choice to stay clean, Jodi heard a knock on the door. In the back of her mind, she could hear her pastor say, “Are you ready?” She knew she was. Jodi answered the door. Officer Jeff Kirkland and other investigators were working on an investigation. They went through Jodi’s home and phone. They questioned her about now having two phone numbers. Jodi explained that she had two phone numbers as she had gotten a second number after her decision to begin her recovery process. She did not want her past life to interfere with her new life. The investigators wanted to know who the dealer was. Jodi did not know.

Because the officers found drugs and several drug-related pieces of paraphernalia in her home, Jodi was arrested for the very first time. The officers did allow Jodi to call her mother to come and get the children. For that, she was eternally grateful, but seeing pure disappointment on her mother and father’s face is an image that Jodi will never forget.

Jodi now sat in jail on a $1.5 million dollar bond. She was placed in a cell with a lady who was also battling a drug addicted life, and she was about the age of Jodi’s mother. During their talks, Jodi remembers the lady telling Jodi that she could be her daughter. At that point, it confirmed to Jodi that drugs and jail was not the kind of life she wanted to live. She did not want to be absent from her children’s lives.

Jodi prayed a lot while in jail, and she found comfort in those prayers. After being released on bond, Jodi contacted the Hope House, met with Brother Bud, and finally was paired with Sheree Logan, who assisted her in finding Narcotics Anonymous (NA) meetings.

After staying clean for seven months, Jodi was given the opportunity to participate in Blount County Drug Court. It was a four-phase program that allowed Jodi to take steps to aid in her recovery. She would begin attending intensive outpatient classes. Jodi attended three IOP classes per week, a family night class on Monday, completed 100 hours of community volunteer service within the first phase, two NA meetings a week, in addition to attending court each Friday. She graduated from the Drug Court Program in October 2012.

With God’s timing, the drug court clerk was retiring just as Jodi graduated. She was asked to complete a resume for the vacant position. Jodi laughed and said, “I have no experience. What do I put down, ‘previous drug addict?’”

But Jodi did have experience. She had life skills that had taken her from a life of drugs to a life filled with hope. In addition, Jodi had led several of the IOP classes, with a counselor in attendance, during the last phase of her drug court program. Jodi could relate to the participants. She had walked that same path and knew the daily battles they faced. In addition, Jodi discovered she loved helping others.

In 2013, Jodi started out as the drug court clerk/administrative assistant. During her service as drug court clerk, several people continued to offer encouragement, support, and time-management training, as she was a single mom with four children and working full-time. Even with an already full load on her plate, Jodi began taking some drug certification classes. She then started taking college courses to pursue a degree in psychology.

Utilizing the fast-track program, Jodi graduated from college with honors. She used her own life experiences as subjects for most of the papers she had to complete. The professors knew of her previous life and enjoyed her first-hand experiences being put to words.

Now, when entering Jodi’s office, you will find her drug court graduation certificate in the center of her wall surrounded by all of her other certifications and degrees, including the Morgan Neel ‘Making a Difference Award’, which is a pretty big deal in the AOC world. Jodi knows that graduating from drug court set her career path in its current direction.

With the support from her mentoring pastor Kelley Belcher, Jodi graduated from the Billy Graham School of Evangelism in 2020 and is now an ordained minister at Garden City Congregation. Her involvement with this church has provided an opportunity for some in her previous life who would never have stepped foot in church to attend the non-denominational congregation without judgement. She lets them know that we are all sinners, can be forgiven, and introduces them to our Heavenly Father.

Jodi still updates her relapse prevention guide every year. As life continues, updates need to be added or revised. Jodi focuses on her main goal to remain clean and to avoid obstacles as much as possible.

In 2018, Jodi married her current husband. It’s funny how life sometimes puts people in your life from years gone by. Her husband was the drummer in the Hanceville High School band when she played the trumpet. He was the one she had a crush on, but he was only focused on becoming a famous drummer. She laughed as she said he did not even give her the time of day.

They reconnected in 2017 when Jodi received a message from him. He had pursued his percussion career, been involved in drug use, and was now clean for seven years. They dated about a year before marrying. To Jodi, he is her hero, her encourager, best friend, and greatest supporter. And, they are equally yoked according to God’s word.

Today, Jodi is loving life. She credits Judge John Dobson, Sheree Logan, Darryl Wheeler, Pastor Gerald Harper, Pamela Casey, her mother Kathy, and her father Harold for giving her tremendous support and the opportunity to turn her life around.

Jodi prays daily for others, for continued strength to remain drug free, and to be a light for anyone who may cross her path.

Twelve years drug-free and still going strong! What a testimony!