Grayson Davis, today’s People of Blount County, recently had the opportunity to open up a concert with a 10-minute set for the iconic classic rock band Foreigner. Not many 15-year-olds can say they have had this once-in-a-lifetime opportunity, but for Grayson, it is true, it is real, and it took place on Nov. 17 at the BJCC Concert Hall.

Grayson, who only began playing the guitar three years ago, has mastered many levels of music and now makes his own back tracks. When he picked the guitar, Grayson knew very little about music.  But within days, he learned to read music and soon began taking guitar lessons. When one guitar coach can take him no further, Grayson will seek out someone else.  He wants to learn.  He wants to become even better.  He is up for the challenge.

Nowadays, Grayson can even play the guitar behind his head. He has remained dedicated to his passion, which ultimately led up to him entering a contest by 106.9 The Eagle.

The contest asked area-wide Birmingham high schoolers to submit a video of them playing their favorite rock or medley song. The winner would have bragging rights of performing alongside one of the most iconic classic bands in history, plus $500 would be donated to their high school music program.

Since his debut, Grayson’s parents have received phone calls and business cards, including one from the Vegas manager who picked Grayson’s video, from agents and managers of those wanting to be his manager in five years. After all, he will only turn 16 on Dec. 26. He still has school to finish. 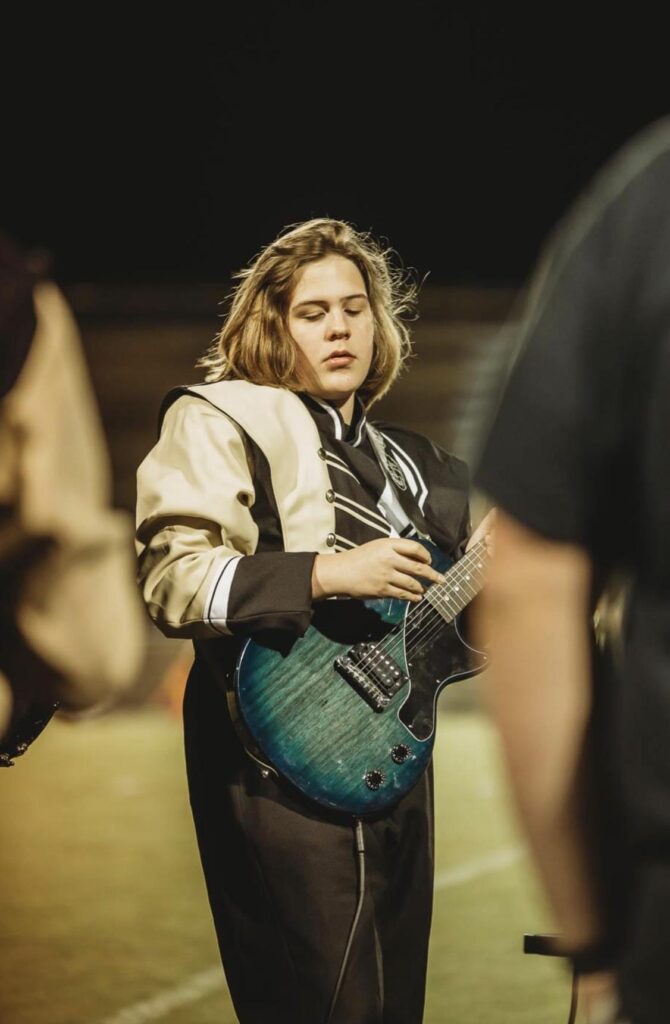 With people reaching out, It has been a crazy few weeks, but Grayson’s mother says he continues to be nonchalant about all the hype. When interviewed by the radio station, Grayson simply answered the questions, no elaboration and no further details. When asked what he wanted to do later in life, Grayson said, “I just want to play music.”

But the nonchalant attitude is how Grayson rolls. He is primarily a homebody and family oriented. He is quiet and not a follower of others. Most hours of his free time, he will have a guitar in his hands. His idol is Steveie Ray Vaughan. Grayson’s home is blasting music all day long. And this makes him content.

So why did Grayson only begin playing the guitar three short years ago?  It was at the hands of his parents.  They were tired of him on a headset playing video games and only coming up for air to eat or drink. They boxed up all of the video games and gaming systems in the home and gave them away.  They told Grayson to pick out a hobby. He chose the electric guitar. It was his jam and the rest is history.

This year, Grayson joined the Pride of Hayden Marching Band when he was approached about playing the electric guitar. That has truly been an experience for him. 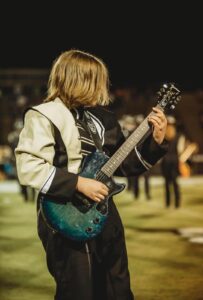 As Dec. 26 approaches, Grayson is looking forward to driving solo and having that freedom of the road that every teenager wants, but makes most parents cringe with fear. Some of his road trips may include visits to the Sushi bar.  Grayson is obsessed with Sushi, and after most guitar lessons, he persuades his grandparents into taking him for some of the delectable delights.

On those rare moments when Grayson does not have a guitar in his hand, he may be hanging out with buddies or with his girlfriend.  He also enjoys spending time with the family Shih Tzu.

As of now, Grayson will continue perfecting his guitar talents.  He will get his driver’s license, finish up high school, and eventually strike out on his own. But when he makes the big time, you heard it here first.