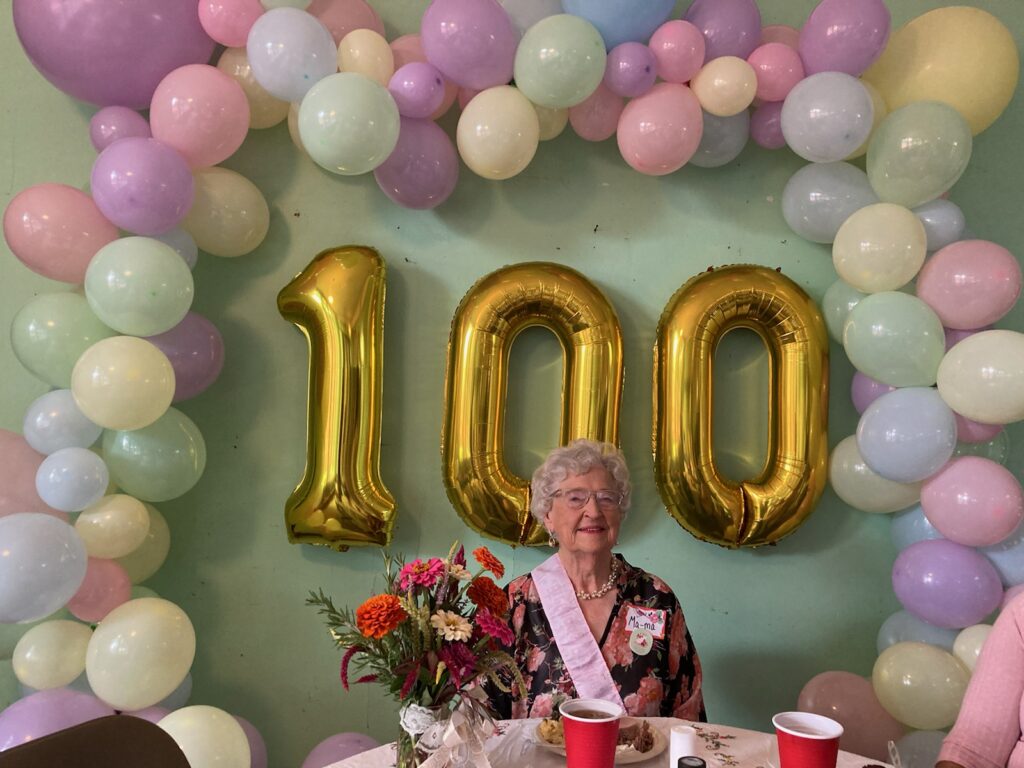 These words come at a time many of us will never experience.  Birdella “Skipper” Gilbert turned 100 a couple of weeks ago and asked herself this question.  She had never really thought about it until recently.  It is definitely something to ponder.

Looking back over her life, Skipper can tell you some stories that will make you laugh and cry.  Life has been good to her.  Through it all, she has kept an open mind, maintained laughter, and kept a good sense of humor.  These attributes have helped her endure.

Born in Humboldt, SD, Skipper and her four siblings grew up in Sioux Falls, SD.  When the children were younger, all five, plus her mother, were stricken with small pox.  The youngest sibling, a baby girl, was just six months old. Skipper vividly remembers her mother, who was a wonderful seamstress, making mittens for everyone and sewing them at the wrists to keep the children from scratching the pustules and having significant scarring.

Skipper also recalls her father having to put groceries and other needed items through the window at their house because it had been quarantined and had a large yellow sign with big, black letters that said, “Keep Out.” No one was allowed to enter. 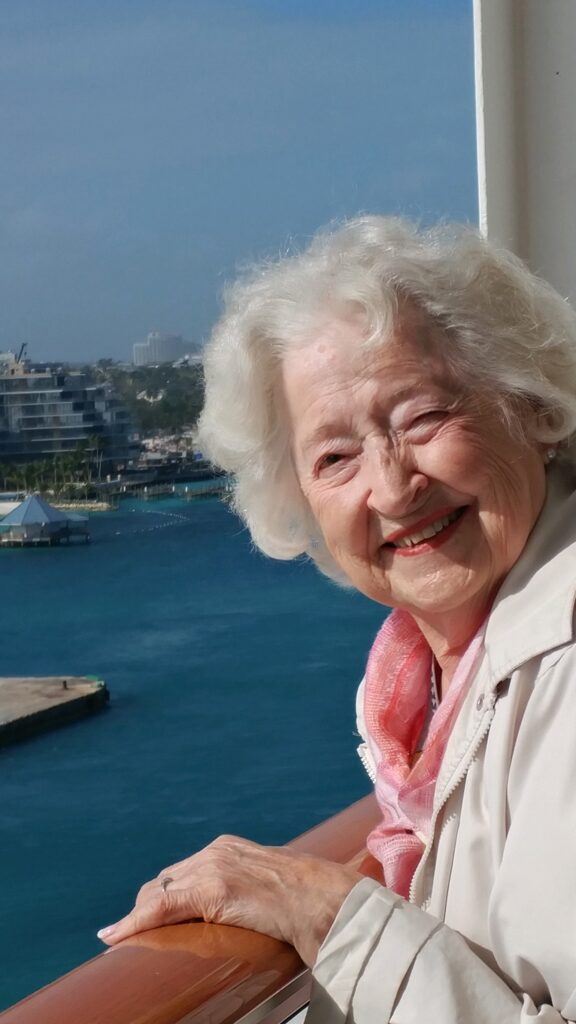 Later, the family contracted Scarlett Fever.  Sadly, Skipper’s infant sister could not overcome the effects of the fever and died within a short period of time.  Everyone else recovered, but six months later Skipper’s brother developed a leakage of the heart and did not make it.  It is believed the complications were due to his bout with small pox.

When her brother passed away, the family continued to mourn their losses.  During this time of grief, Skipper began pitching a fit one day simply because her mother asked her to do something.  Skipper told her mother that she wanted to die and go where her little sister was.  Her mother told Skipper that she was going to be just fine.  Her mother must have had an inkling because here she is more than nine decades later.

When living a long life, a person experiences many highs and lows in the world.  After the Depression hit, Skipper’s dad, who had previously been a leading salesman, lost his job.  He decided to leave town and look for work.  Days, weeks, and years went by before the family heard from him.  He returned 10 years later and wanted to re-join the family unit, but Skipper and her oldest brother agreed they did not need him.  They grew up without a dad and were doing just fine.

Even though Skipper’s mother had secured a job as a cook at the local hotel, she also earned money by making clothing for those who could not find clothes to fit them in the stores.  Despite the depression financially strapping most people and not allowing for things like new clothes, Skipper and her siblings were fortunate to be well-dressed simply because of mother’s sewing talent, which included making hats.

It was in high school that the name Skipper originated.  Skipper had a Dutch teacher.  They pronounced her maiden name Schipper as “Skipper,” whereas the German’s pronounced it as “Shipper.” It is ironic that her older and younger brothers were also nicknamed Skipper.  All three would answer when the name Skipper was called.

After high school, Skipper landed her first job with New York Life Insurance thanks to a good word put in by her principal. She also did some babysitting and cleaning homes.  Skipper chuckled as she remembered going home after securing the New York Life job.  It was then that she told her mother to quit her job as she was now making $15 per week and could take care of the family.

With Skipper now making $15 per week, it seemed to bring out some jealous tendencies with her older brother.  In fact, he went to the local store and charged $12 worth of peaches to Skipper’s account one week. Even though peaches were a luxury in South Dakota, he had not asked about charging one peach, let alone several. When questioned by Skipper, her brother told her he was hungry, and although that may have been part of the truth, she still believes he was a bit jealous.

With her mother no longer working outside of the home, it gave her mother time to tend to the garden and can goods for the winter. Because the Depression was still under way, neighbors shared any extras with other neighbors.  That’s how families survived.

While working at New York Life in 1943, an agent went to a men’s gathering and agreed to gather 100 local girls to entertain the WWII troups.  Soon there were 100 girls attending a dance, including Skipper. She recalls telling her friends that she hated the ice and snow and if she met a guy from the South she would marry him if asked.

At the dance, her wish came true. She was snagged by a blond, good-looking guy named Edmund Gilbert.  He was from Alabama.  They married in 1943, left South Dakota, and she had no regrets.  Married for 59 years before he passed away, Skipper and Edmund raised three boys and three girls.

Skipper worked for an attorney in Birmingham to help supplement the family income.  She had a nanny named Ruth that loved and cared for the children while Skipper worked.  It was during a mid-30’s birthday that Skipper baked Ruth a birthday cake.  The kind gesture brought tears to Ruth’s eyes, as it was the first birthday cake she had ever had.

After giving birth to her fourth child, Skipper decided to quit her job because she was paying Ruth more money than she was earning.  Her boss, who greatly appreciated her work ethic, did not want her to quit and put Ruth onto his payroll so that Skipper would remain with the company. 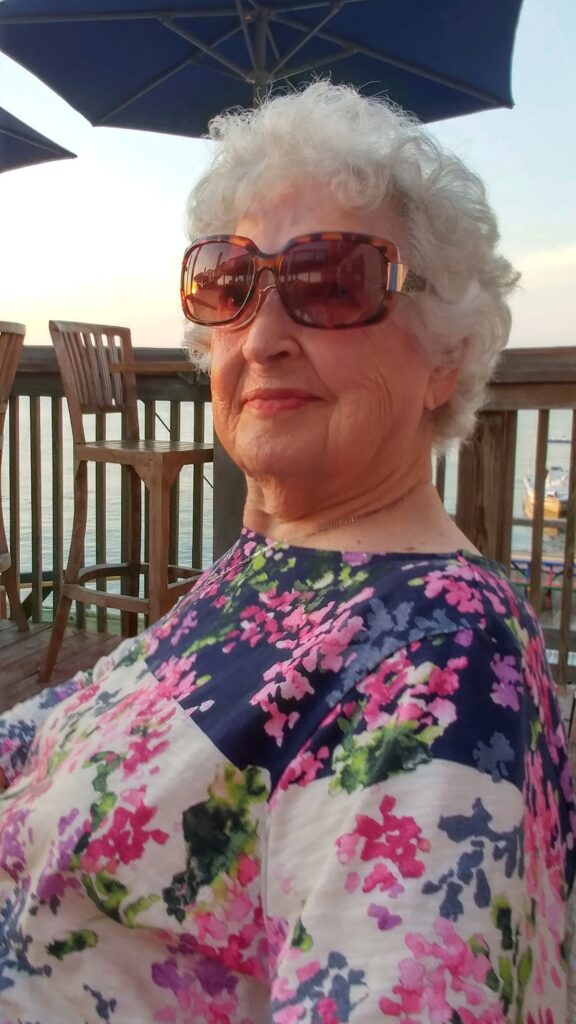 Over the years, Skipper did a lot of legal type work, including court reporting and typing legal transcripts on a manual typewriter.  A court reporter friend tipped her off about a job opening with then Federal Judge Seybourn Lynne.  That job doubled her salary, and she worked for him for 27 years before retiring at the age of 73.

That job afforded her the opportunity to meet many people including a gentleman who came into the office and tipped his hat at her.  He called her Ms. Skipper even though they had never met.  That gentleman turned out to be the legendary Bear Bryant.  In a conversation with him, Skipper asked how he spent most of his time.  He replied, “Going from bar to bar looking for Joe Namath.”

While living in Maine after she and Edmund married, Skipper also had the opportunity to meet Clark Gable.  She remembers him standing erect during their brief meeting.  He was headed to England to entertain the troops and the plane stopped to get gas before leaving the mainland.  One of Skipper’s friends who was able to secure a date with Gable while he was in town later told her, “He was nice, but the fastest guy I ever met.”

A gal from South Dakota learning to cook was also an adventure.  With Edmund wanting spaghetti one night, Skipper told him she thought she could make it.  She sent him to the store to get hamburger and garlic.  As she cooked the sauce, the children downstairs smelled the wonderful aroma coming from her home and asked if they could have some too.  Of course, she obliged.

After dinner, Skipper and Edmund were going out and got on the bus.  A friend asked Edmund what he had eaten.  Skipper may have put just a tad too much garlic in the sauce as they both reeked of garlic.  She admits she put the whole bag of garlic cloves in the sauce because she really did not know how much to use.

As a cook, Skipper learned early on by her husband to cook by color.  Each meal must have something red, green, white, and brown on the plate to be a balanced diet.  Eating a balanced diet is something she adheres to to this day. She also sips three ounces of wine each night before going to bed.

Skipper did smoke for several years after being taught how to smoke from a friend’s mom one night at a sleep over when she was 18 years old.  Her friend’s mother thought it to be fashionable and taught all of the girls there that night how to smoke.

Skipper’s mother smelled smoke on her as soon as she returned home.  Although she tried to be evasive, Skipper finally told her mother the truth.  Skipper smoked until she was in her mid-30s when the doctor advised her to quit smoking or die.  She put them down immediately and bought a bag of peppermints, which she hates.  When she had the urge, she popped a peppermint in her mouth.

Skipper moved to Oneonta after retirement, but moved to Pine Mountain with her daughter and son-in-law in 2018 after everyone felt it was no longer safe for her to live alone. Throughout her social years, Skipper was a Red Hat Lady and part of the Prayer Shawl Ministry, as well as a member of Lester Memorial United Methodist Church.  Skipper has dabbled in ceramics, painting, quilting, and teaching community Bible Study over the years.  She has always led a very active lifestyle and is very talented.

Up until 2018, Skipper drove herself around as needed.  Although she was still a good driver, word has it that she had a heavy foot and drove a bit faster than she should have.  Now she is chauffeured to her appointments and other outings, but still retains her driver’s license.

Being in the South for 80 plus years, Skipper has lost most of her strong mid-western accent; however, she still pronounces eggs as “aigs (lower case a)” and legs as “laigs.”  Other than that, one would think she was born and raised as a southern girl.

At her 100th birthday party, there were exactly 100 people in attendance.  About 90 percent of those attending were family.  At a question and answer period during the party, no one was asking questions until a great-granddaughter piped up and said, “Have you got your own teeth?”  After a few gasps and uncomfortable moments for the crowd, quick witted Skipper looked up and answered, “Well, I wouldn’t have anybody else’s.”

Being 100 years old is a milestone few encounter.  She has survived small pox, lived through WWII, the Korean and Vietnam Wars, witnessed segregation, and survived the Depression years, swine flu, and COVID-19.  What does she do from here?  Who knows, but one thing is for sure, Skipper will not sit idle and let time simply slip away.  Each day is precious, and she intends on making the most of each and every one. 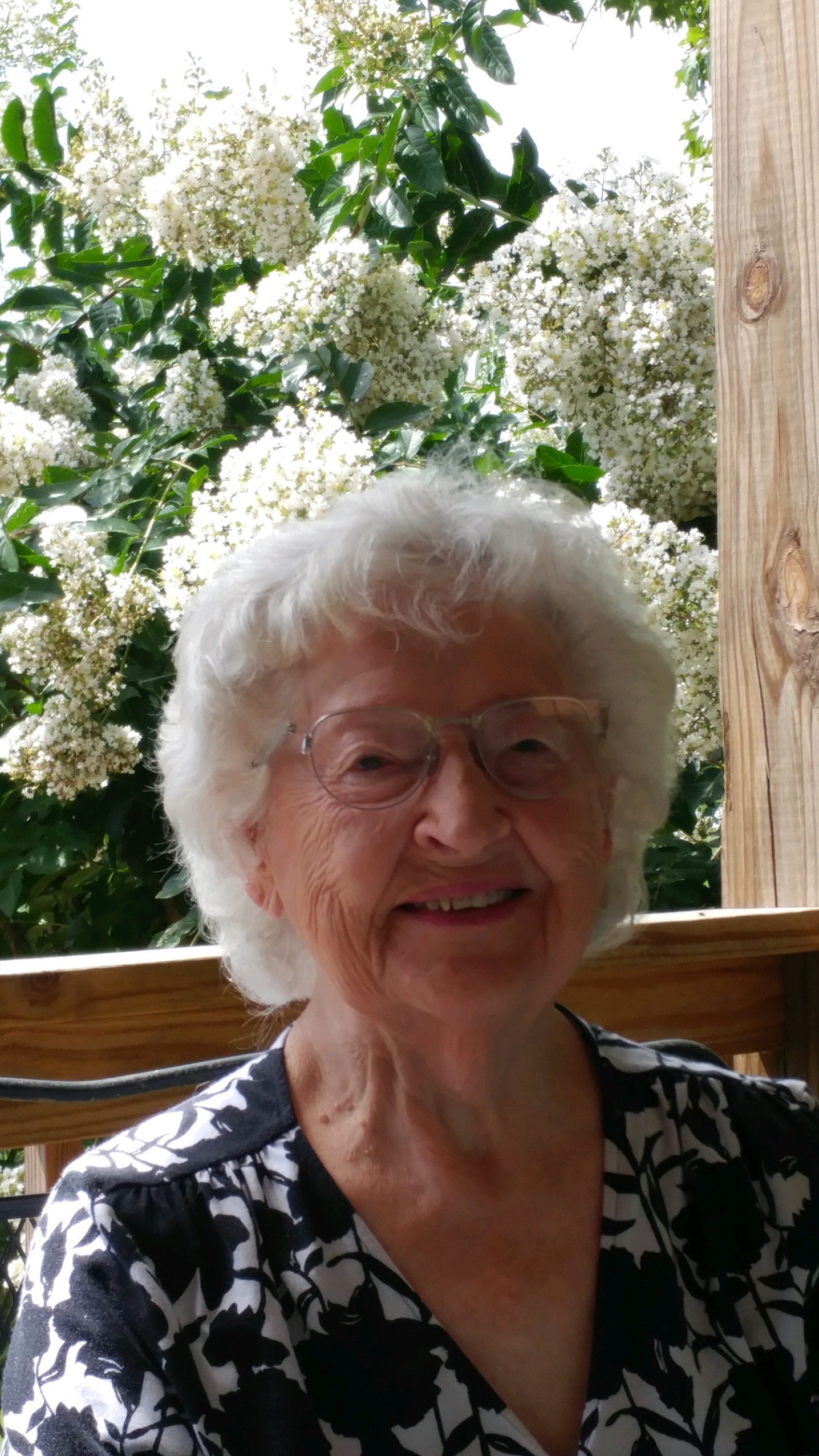