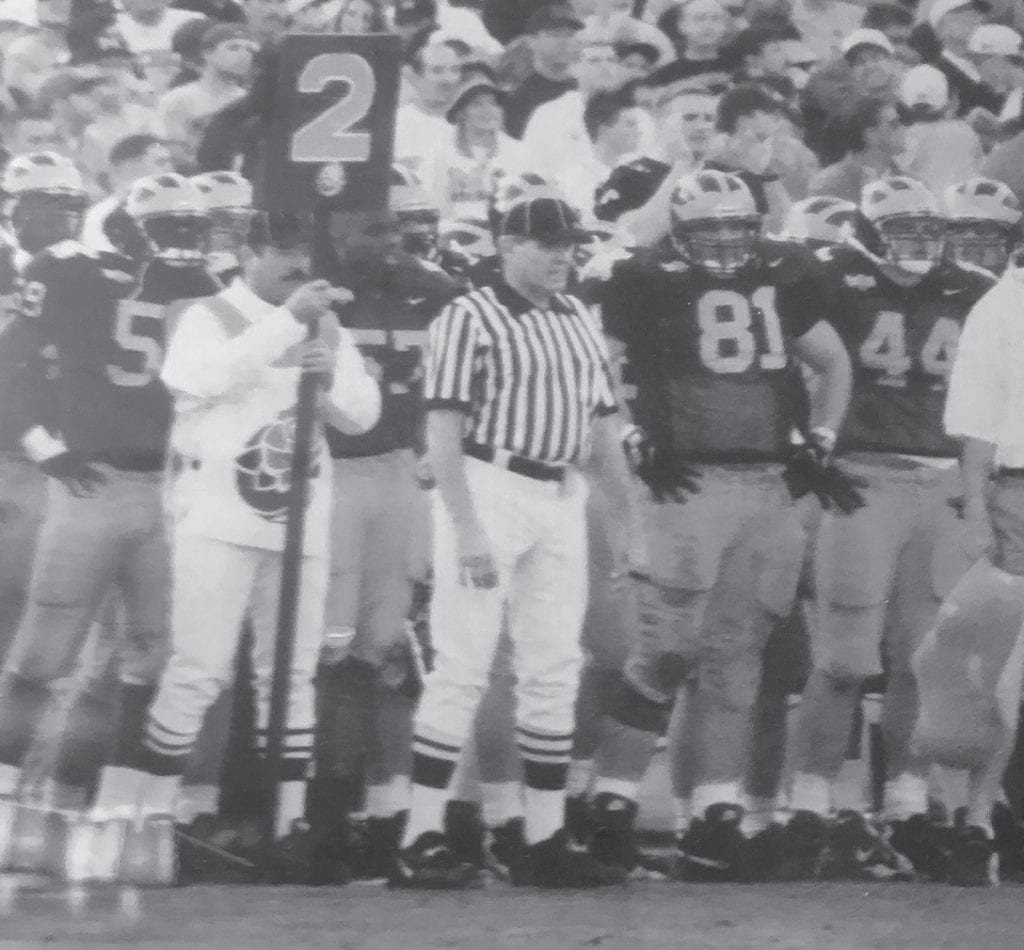 In August, 12 officials were inducted into the Alabama Sports Officials Hall of Fame (ASOF). Among them was Bob Patrick of Limestone Springs.

Patrick began his career as an official in 1964 refereeing high school football until 1969. From there, he began officiating in the Gulf South Conference before moving on to the Southeastern Conference (SEC) in 1971. He officiated on the field in the SEC for 28 years until 1999 when he moved to the booth as a replay official. He stayed in the booth until the 2018 football season.

Patrick now works as a gameday observer, watching the on-field officials to critique calls made throughout the game and provide feedback and advice. He has been a football official for 55 years, spending 48 years in the SEC.

Patrick has been a part of many big games in his career, such as the 1998 Rose Bowl (pictured right) in which the top ranked Michigan Wolverines defeated the No. 7 Washington State Cougars 21-16 to claim the national title that year. His other bowl games include the Sugar Bowl, the Cotton Bowl (twice), the Weed Eater Bowl, the Orlando Bowl, the Freedom Bowl, the Gator Bowl, and the St. Petersburg Bowl. Patrick has also officiated 11 Senior Bowl all-star games.

Patrick says the most memorable game of his career was the 1989 Iron Bowl, the first to be played outside Legion Field in Birmingham, and the only one he was able to work as an on-field official. “I never lost my butterflies in that game,” Patrick says. “Any other ballgame, you get settled in after kickoff, just like playing, but in that game I stayed excited the entire ballgame.”

Patrick has dealt with many different fan bases. He has officiated hundreds of games for many different schools with thousands and thousands of cheering fans. When asked which team he thought had the best and worst fan bases, he said “There is no worst. Some get on you more than others and sometimes it can be really funny.”

One of these moments was the 2013 Iron Bowl. Patrick was the replay official who made the call to add the second back on the clock to give Alabama a chance to kick a field goal and win the game, much to the displeasure of the Auburn crowd. However, once the Tigers returned the missed field goal for a touchdown to win the game, their attitudes shifted tremendously.

Patrick recounted the moment saying, “We left the pressbox to get on the elevator and there was a crowd of Auburn fans still celebrating. They saw us come out and they got real quiet and I asked them, ‘Where’s the love for us now? 85,000 of you booed us 15 minutes ago for putting a second back on the clock.’ And of course they laughed and thought that was pretty funny.”

Moments like those certainly keep the job interesting, making every week a new experience in the world of a sports official. Patrick has had a long, successful, and certainly memorable career. At 80 years old, however, he doesn’t seem to be getting tired of the career whatsoever.