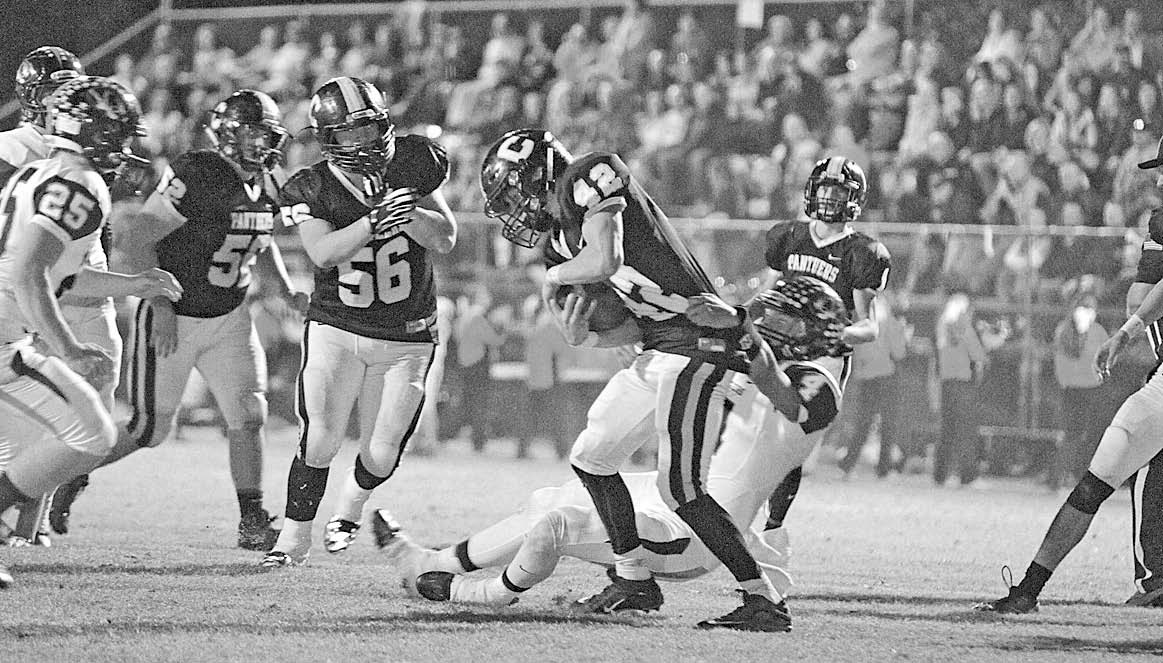 After one week of the high school playoffs, Blount County is down to just a single team.

The Cleveland Panthers took the proverbial lumber to Red Bay and bounced the Tigers out of the playoffs with a 41-14 win last Friday at Michael E. Dixon Memorial Stadium.

The rest of the county didn’t fare as well.

Hayden got out to an early lead but couldn’t hold on against a Fairfield team that limited the Wildcats to just 79 yards rushing and 145 total yards in a 14-7 loss.

Finally, Locust Fork went to Ohatchee and gave the Indians all they could handle but fell 49-28 to one of the best teams in Class 3A.

This week, Cleveland looks to keep it going on the road at top-ranked Fyffe.

The Panthers and Red Devils are familiar foes as this was a region game in 2014 and 2015. No surprises this week, the team that plays the best Friday night will advance.

The Panthers turned in their best performance of the year last week and totally outclassed a quality Red Bay team. Cleveland rolled up more than 250 rushing yards while holding a potent Red Bay running game to just 115 yards. It will take a similar effort this week to slow down a Fyffe offense that hasn’t checked up all year.

Under Paul Benefield, Fyffe has played for the last two state titles – winning the 2A title in 2014 and losing to Elba in the title game last year.

The Red Devils do what they do and, so far this year, no team has been able to even slow them down – their average margin of victory is 42.1 points per game.

I’m sure the Red Devils have heard it a time or two this week but the last team from the North to stop them was Cleveland – a 21-14 win at Fyffe in Week 2 last year.

The Red Devils are led by running back Dilan Kilpatrick (5’11, 200 Sr), a first-team all state selection a year ago who is about 15 pounds heavier this season. He runs behind an offensive line that graduated four of five starters from a year ago but this bunch hasn’t missed a beat. This is a deep group that averages 235 pounds among the starters.

Seth Benefield (5’9, 185 Jr) was forced to play quarterback last year – his first game to start was against Cleveland – but he has now seized the position and made it his. He can run or throw and is a hard-nosed, physical presence.

Cleveland must contain Kilpatrick. He has gone over 120 yards in every game this year and is as explosive a running back as you’ll find in 2A.

The Panthers have given up some yards on the ground at times this year but this is also a Cleveland defense that has gotten better and better over the second half of the year.

The high-powered running games of Cold Springs and Red Bay didn’t do much but spin their wheels against the Panther front seven. One of the key match-ups this week will be the Fyffe offensive line against the Cleveland defensive front and, in particular, Panther linebackers Hunter Green and Adriam Hernandez. Green almost singlehandedly destroyed Fyffe’s offensive rhythm last year with 17 tackles, including 12 solo stops.

On offense, Cleveland faces a Red Devil defense that has flat-out dominated every offense it has seen this year.

The Panthers have been able to run the ball against just about every defense this year and Nick Randolph has exploded over the second half of the season – he has now gone over 1000 yards this year.

Cleveland must run the ball for two reasons.

One, the Panthers need to keep the chains moving and keep the Red Devil offense from controlling the game. If Cleveland can get positive plays consistently from Randolph and Caleb Collum – much like last year – the pace of the game will favor the Panthers.

Two, the Cleveland passing game is built around play-action. The Red Devils will play a lot of man-to-man on the outside with the safeties helping out in run support. If Cleveland is able to run the ball, those safeties could get caught down inside and the Panthers are good enough outside with Parker Gilliland and Desi Cozad (and Randolph out of the backfield) to make plays against single coverage. Wildcard

Fyffe is always solid in special teams – so is Cleveland – but how about this?

The last time Fyffe was in a fourth quarter with the game on the line was last year’s 2A title game – a 36-22 loss to Elba.

Cleveland is 8-3 on the year and the Panthers have been in several close games. Yes, they lost a few – and were blown out at Tanner – but this is also a team that got a gutsy win at J.B. Pennington and utterly dismantled Cold Springs in a must-win game late in the year.

If the Panthers can get this game into the second half with the issue still in doubt, how will Fyffe respond?

Next week – The Cleveland/Fyffe winner plays the LaFayette/Sheffield winner – Cleveland will host regardless of the winner.