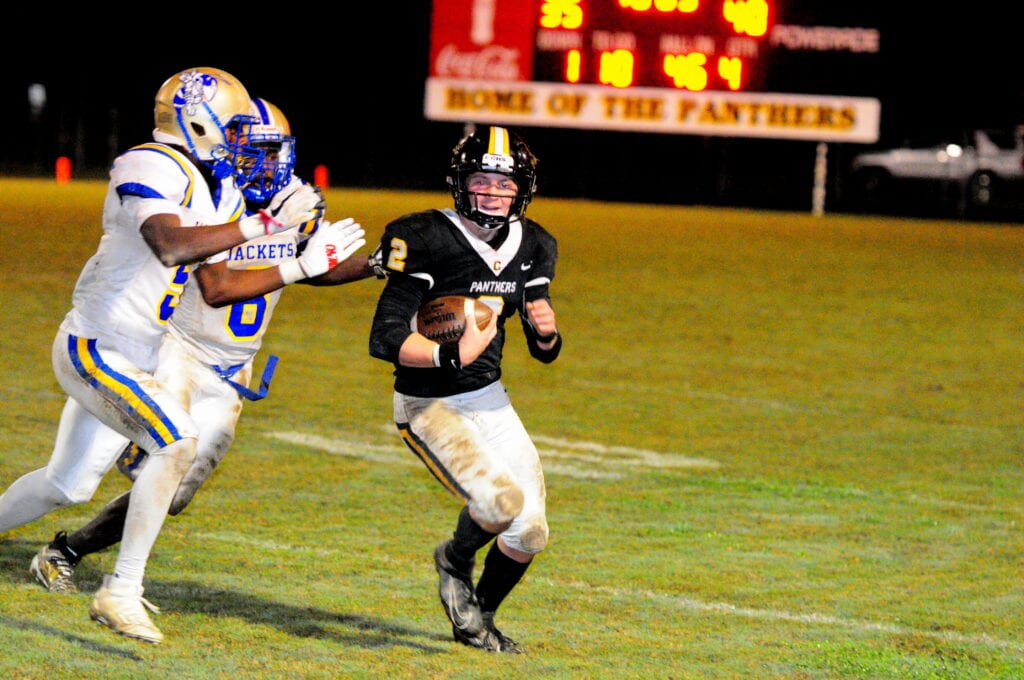 The Cleveland Panthers hosted the Aliceville Yellow Jackets in the second round of the Class 2A playoffs. The Panthers came up short in an exciting 48-42 offensive explosion.

Aliceville got on the board first on a 63-yard run by Jermaine Brewer. The try for two failed, but the Jackets had an early 6-0 lead. Less than two minutes later, Cleveland was down 12-0 following a 29-yard pass from Ty Williams to Cornelius Burns. Again, the try for two failed. Near the end of the first quarter Logan Washburn scored from 1 yard, and Jonathan Hernandez’s point after cut the Yellow Jacket advantage to 12-7.

Early in the second quarter, the Panthers took the lead on a 29-yard pass from Washburn to Skyler Self. Hernandez put Cleveland up 14-12 with 10:16 before the half. The Panthers extended the lead to 21-12 on a 48-yard pass from Washburn to Pierce Gilliland. Hernandez was true on the point after. Aliceville, however, scored twice in the last four minutes of the first half. Williams hit Tyquan Sanders for 19 yards and a score. The pass for the two-point conversion was good and the Jackets cut the Panther advantage to 21-20. Aliceville then took the lead on a 9-yard run by Burns. The score at the half had the Jackets up 26-21. 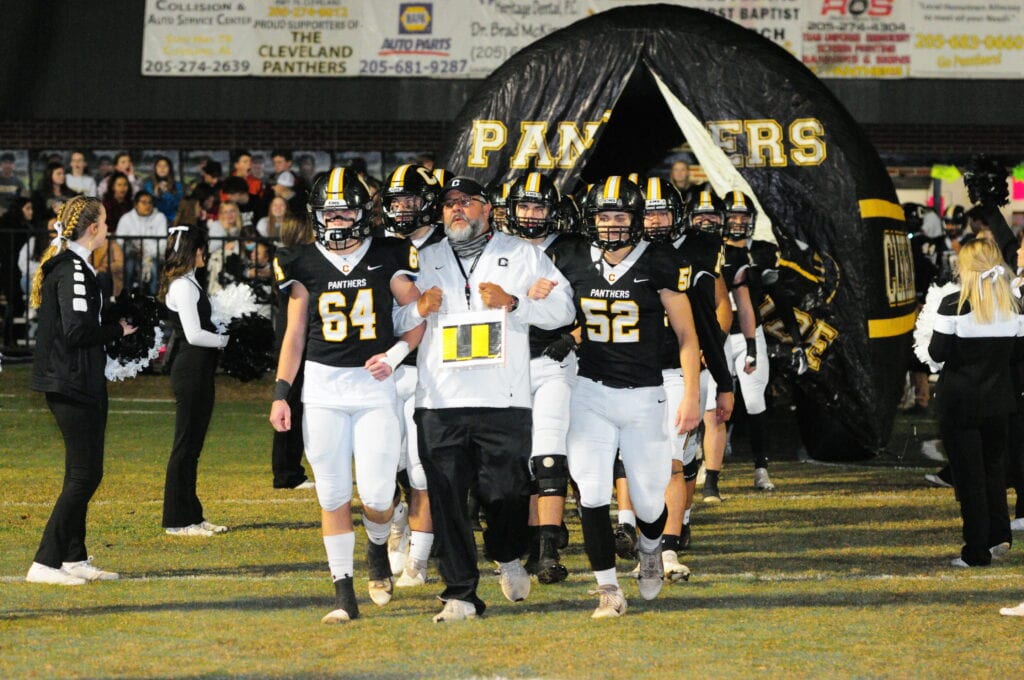 Head coach Gardner Gilliland and the Cleveland Panthers take the field to face the Aliceville Yellow Jackets in round two of AHSAA playoffs. -Keith Standridge

The Panthers opened the second half with an 87- yard kickoff return by Gilliland. Hernandez’s point after put Cleveland back up 28-26. In the back and forth battle, Aliceville went back up on a 1-yard run by Williams. Landon Ball ran the two-point conversion in giving the Jackets a 34-28 advantage with 6:13 remaining in the third quarter. The Panthers got their second score of the quarter on a 5-yard run by Washburn. Hernandez put Cleveland up 35- 34 with just over a minute left in the quarter.

On the first play of the fourth quarter, Aliceville’s Willams hit Jamarree Linder for 30 yards and a score. The try for two failed, but the Jackets had a 40-35 advantage. The Panthers retook the lead 42-40 with 9:36 remaining on a 10-yard run by Daquarrius Phillips. Hernandez hit his sixth extra point. Aliceville got the final score of the game on the ensuing kickoff when Bell went 87 yards for a TD. Williams ran the two point conversion in to give the Jackets the 48-42 victory. 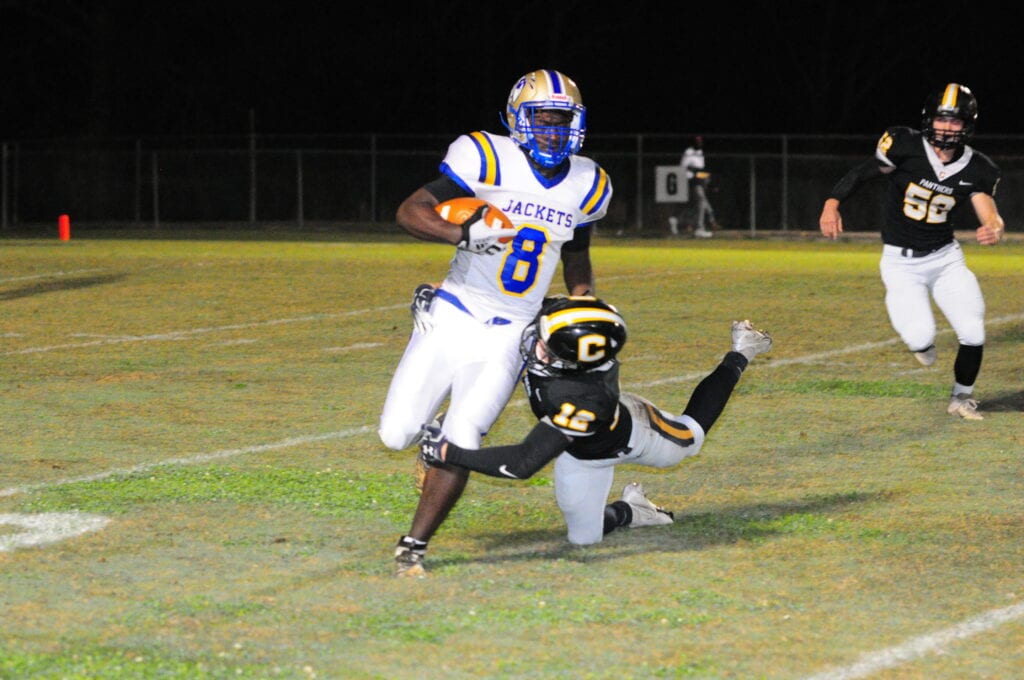 Pierce Gilliland takes down an Aliceville back. -Keith Standridge

The loss ends the Panthers season at 8-4. Washburn was 8-of-17 passing for 131 yards with two TDs and two interceptions. Washburn also had 116 yards rushing and two TDs on 18 attempts. Phillips had 107 yards on 21 carries and a score. The Panthers defense was led by Kartar Adams with 17 tackles. Gabriel Weems added eight, Kyle Willis had seven, and Jacob Johnson and Gilliland finished with six apiece.

Cleveland improved upon their 2019 season, which ended with a round one loss and a final record of 6-7. The Panthers scored 394 points while allowing just 204 points en route to an 8-5 record and third place finish in Class 2A Region 6 (4-2).

Washburn, in just his first season as starting QB, finished the season with 2,430 total yards and 31 touchdowns. Passing, he went 72-of-133 for 1,468 yards and 18 touchdowns with only five interceptions. He added 956 yards and 13 touchdowns on 130 rushing attempts. He tacked on another 6 yards with one reception. 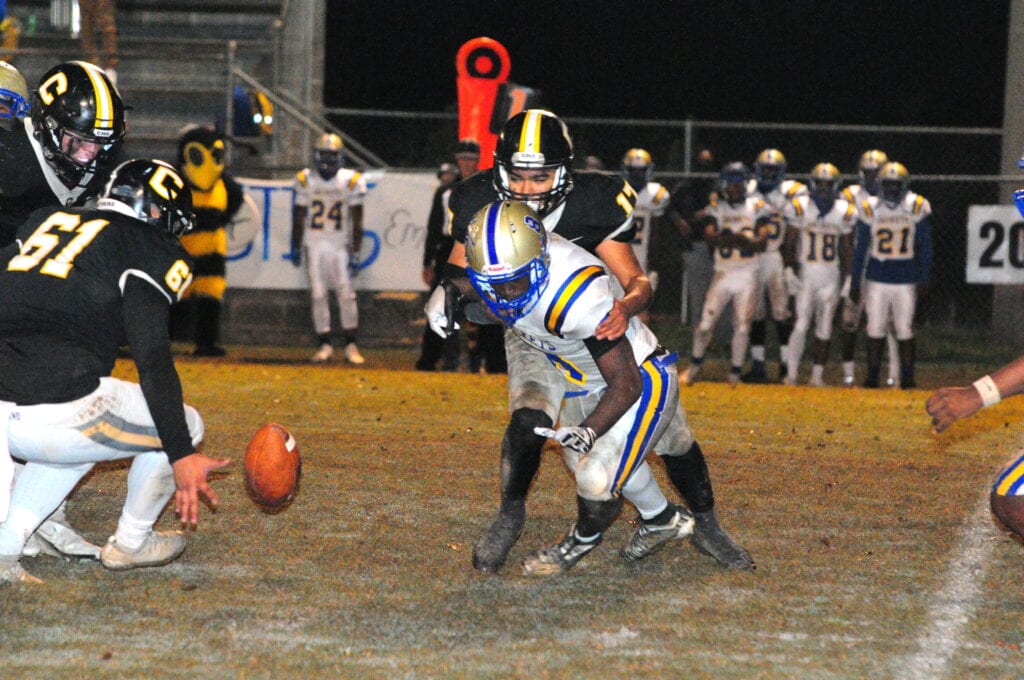 The receiving corps was led by Gilliland, a sophomore. He had 666 yards on 29 receptions scoring 10 touchdowns. He added 132 rushing yards and two touchdowns on 15 attempts as well as 248 yards and a touchdown on kick returns.

Phillips, a senior, was the workhorse for the Panthers in their rushing attack. He finished his senior season with 15 rushing touchdowns. He averaged 8.2 yards per carry on his way to a season total of 1,129 yards on 137 carries while adding another 188 yards on 10 receptions with two more touchdowns.

Anchoring special teams was Aguilar who was 1-for-1 on field goal attempts and 43-for-46 on extra points. He finished up the season with 46 points. Aguilar also had seven touchbacks on 54 kick offs that totaled 2,809 yards.

From the first game of 2020 until their last, the Panthers made the most of each opportunity they got to play. There were many highlights and all of us here at The Blount Countian have enjoyed covering them throughout the season. Special thanks to Caleb Salamone for providing stats each week. We salute the seniors who led this team: David Aguilar, 14, K/WR/DB; Patrick Childers, 60, OL/DL; Jesus Elizzararaz, 59, OL/DL; Jonathan Hernandez, 21, WR/DB; Sterling Hill, 52, OL/LB; Lundin Krejic, 27, WR/LB; Daquarrius Phillips, 25, RB; Skyler Self, 6, WR/DB; Gabriel Weems, 24, WR/LB; Kyle Willis, 4, TE/DL; and Cade Wilson, 64, OL/LB. 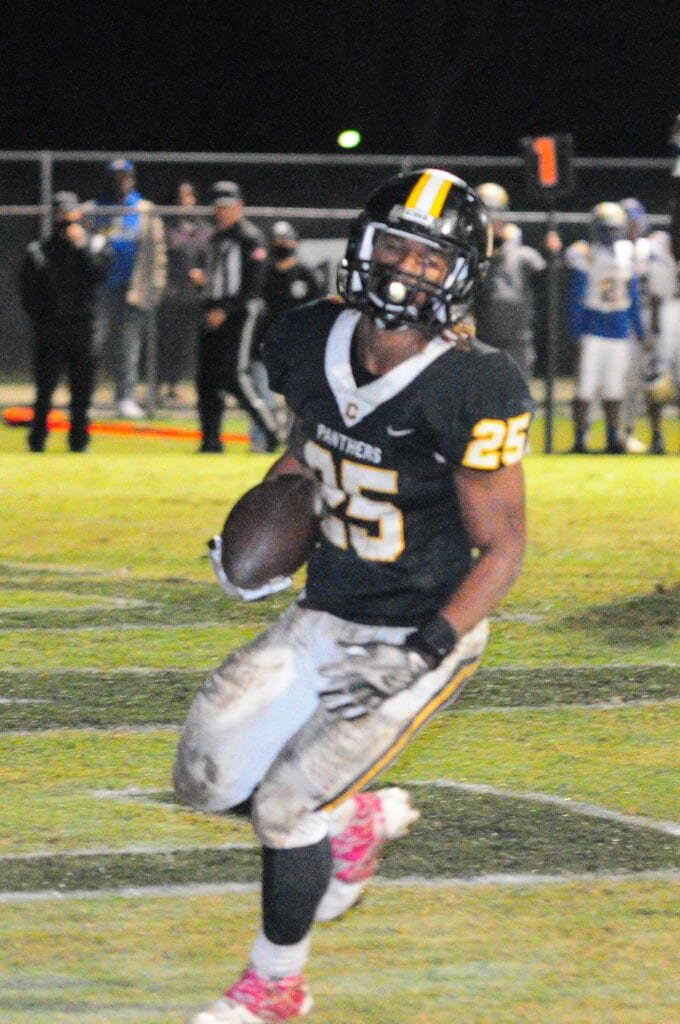 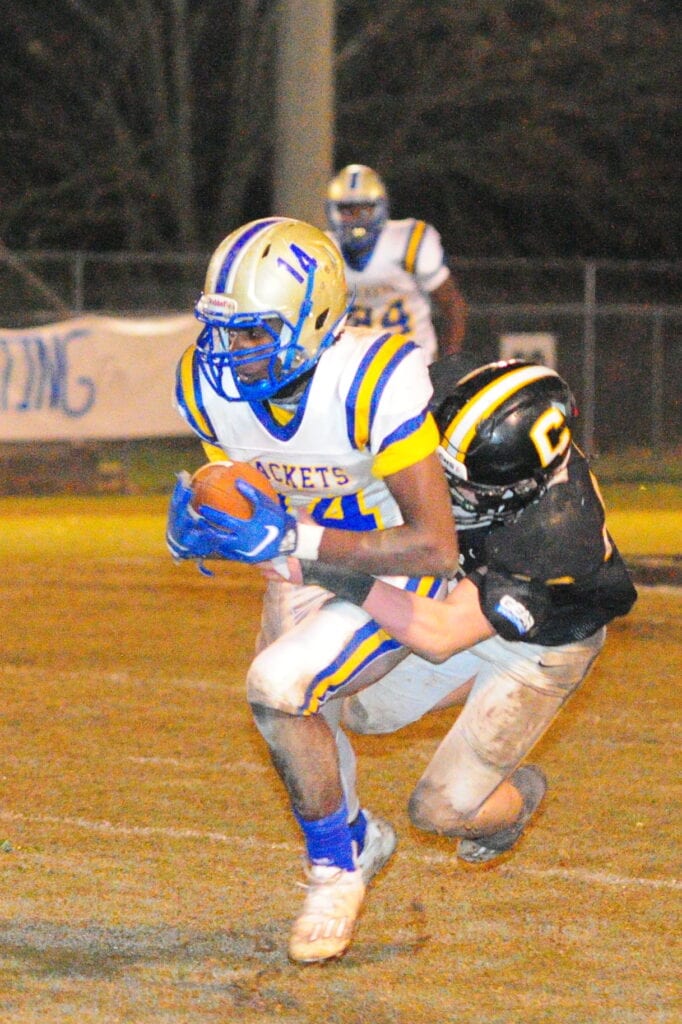 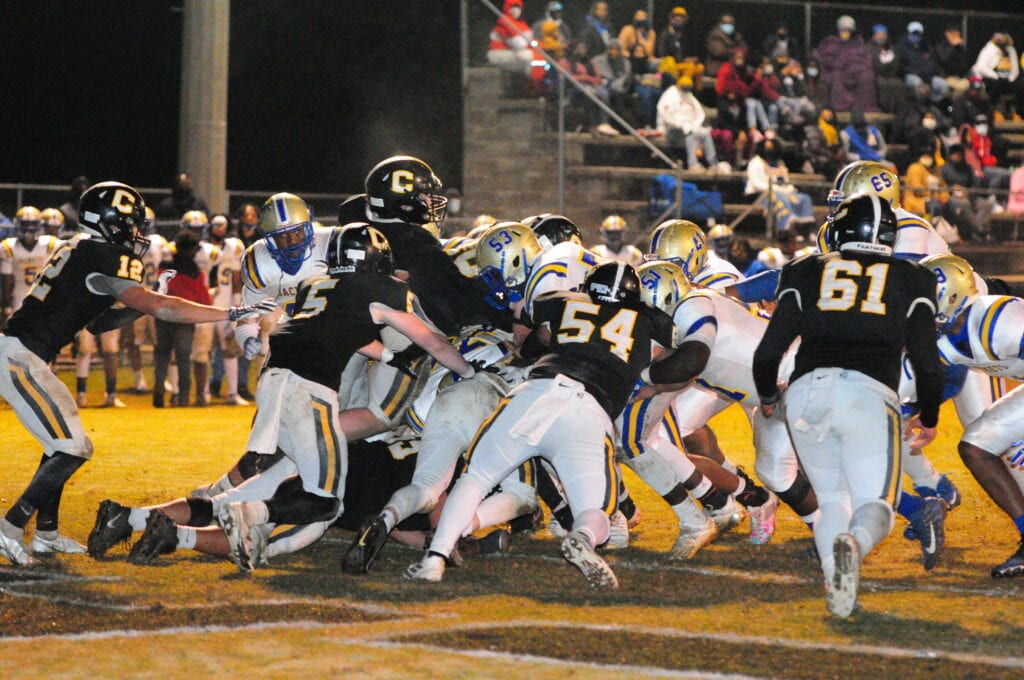