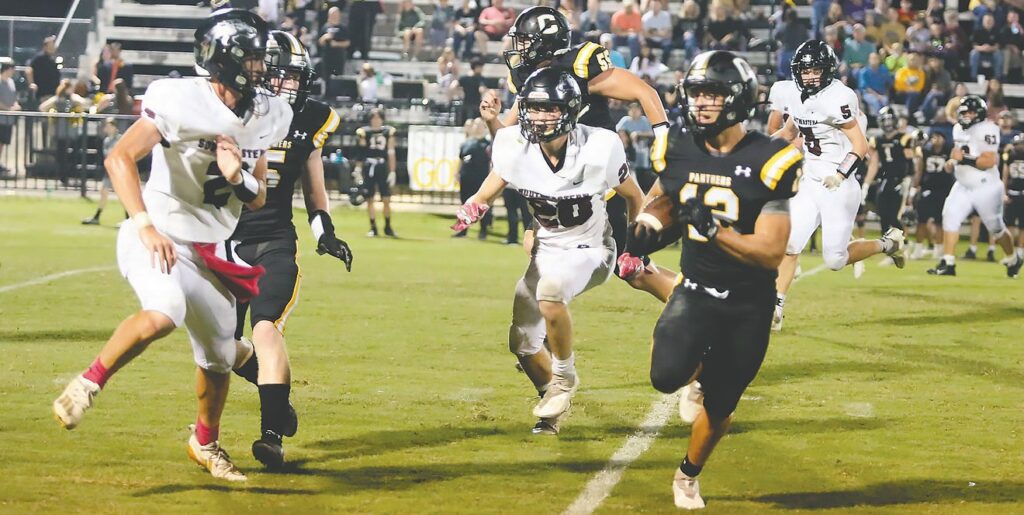 Cleveland’s Pierce Gilliland (12) attempts to get around Southeastern’s Trent Carpenter (2) as Jacob Johnson (5) and Cole Williams (20) close in. -Jeff Sargent

Cleveland and Southeastern have racked up some points and yards through the first half the season, and both defenses headed into the game with a shutout the Friday before. And just in case the county-region rivalry wasn’t enough to get motivated, they went into Friday night’s matchup ranked eighth and ninth in the latest Alabama Sports Writers Association weekly rankings.

The Panthers pounced on the Mustangs early and didn’t slow down. By the end of the first quarter, they were up 21-0. At halftime, Cleveland was up 42-0. They scored only once in the second half, but the Panther defense didn’t budge as they came away with another shutout.

It took the Panthers less than four minutes to get the ball into the end zone. With 8:11 on the game clock, Logan Washburn found Jacob Johnson for a 45-yard TD reception. Washburn ran the ball in for the next four Panther touchdowns. At the 4:12 mark, he ran it in from the 7-yard line and with 2:28 left in the opening quarter he got in from the 1. With 7:18 left in the half, he scored on a 4-yard run. The next one came on a 3-yard run with 2:02 remaining in the half. Washburn’s 3-yard pass to Pierce Gilliland with 0:01 capped the Panthers’ six-touchdown half. Jeremy Acosta hit all six extra points giving the Panthers a commanding 42-0 lead.

Cleveland’s final touchdown came in the third quarter when Tyler Smith ran the ball into the end zone from the 2. Acosta’s seventh extra point was good to put the Panthers up 49-0.

Washburn finished with 238 total yards (213 passing and 25 rushing) scoring two touchdowns through the air and four on the ground. Gilliland caught 12 passes for 126 yards and a touchdown. He added 9 yards on one run for 135 total yards. Johnson finished with 62 yards on three receptions and one touchdown. Smith led the rushing attack with 157 yards on 21 carries with one TD. He added 19 receiving yards for a total of 176 yards. Joseph Walker had 40 yards on six carries.

Southeastern’s Trent Carpenter threw all four interceptions. He finished the game with 46 yards on 15 completions. Cole Williams was 2-of-5 for nine yards. Carpenter added another 71 yards on nine carries while Williams ran for 34 yards on 10 carries. Williams, Dylan Albruzzo, and Ben Hall had two receptions each with Williams adding 36 yards to his total for the game, Albruzzo 14, and Hall 6.

Noah McCray’s 14 tackles led the team. Hall and Jasen Cofield both recorded 11, Evan Albano had nine, Williams had eight, and Albruzzo and Carpenter had six.

Cleveland travels to Gaston Friday for another region match up. The 0-7 Bulldogs were shut out by Spring Garden last week. Southeastern faces Blount County rival this Friday when they travel to Locust Fork for a match up with the 1-5 and 0-4 Hornets who are coming off a 14-56 loss to Sand Rock.