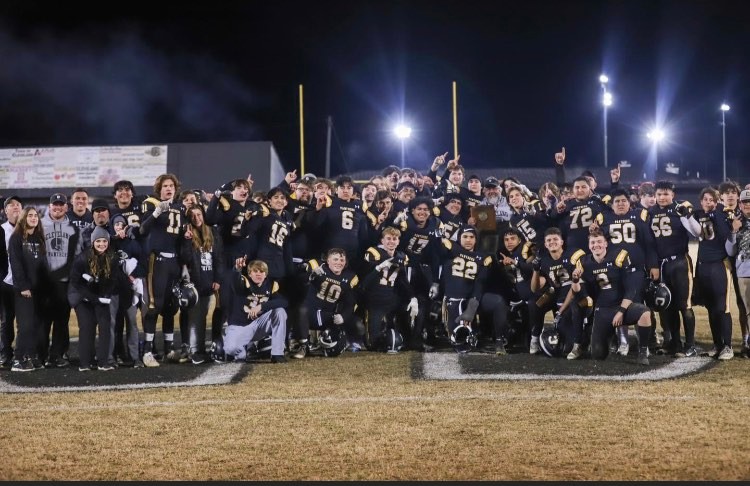 The Cleveland Panthers won the 2A North title and will face Clarke County, winner of the 2A south bracket. Game time is 3 p.m., Friday at Protective Stadium in Birmingham. — Photo submitted by Sheena Adams

With their 21-14 win over Mars Hill, the Cleveland Panthers are headed to the school’s first football championship. Cleveland running back Tyler Smith scored all three Panther touchdowns and  finished with 145 yards on 24 carries. Logan Washburn completed eight of his 11 passes for 65 yards while rushing for 90 yards on 13 carries. Kartar Adams led the defense with 11 tackles and a sack. Will Corder and Hernandez Noe finished with nine tackles, Jacob Johnson and Chavez Gerardo finished with eight tackles, and  Luis  Saucedo and Brody Gibson finished with seven tackles. Gibson added two sacks and a fumble recovery while Saucedo added one sack.

The Panthers tied the game at 7-7 with 3:04 remaining in the opening quarter on a 7 yard run from Smith. Jeremy Acosta’s extra point attempt tied it up. Mars Hill took the lead again with 4:47 left in the second quarter. But with 2:00 left in the half, Smith found the end zone again, this time from 3 yards out. The extra point attempt was no good and they Panthers headed into the locker room down 13-14.

Cleveland scored what ended up being the winning touchdown about 4 minutes into the third quarter when Smith took off for a 33 yard TD. Washburn ran it in to convert the two-point play giving the Panthers a 21-14 lead. The Panther defense did the rest.

The Panthers will face Clarke County at 3 p.m. Friday  in Birmingham’s Protective Stadium. We will have full coverage of the Panthers historic season in Wednesday’s edition of The Blount Countian.

Oneonta celebrates its 28-24 win over Madison Academy. They move on to the title game, which is set for 11 a.m., Friday, at Protective Stadium in Birmingham.

For the first time in the county’s history, two teams will be playing for a state title next week. Oneonta returns to the championship game after their 28-24 win over Madison Academy. The Redskins went into halftime with a 14-7 lead. Madison Academy quickly erased that lead, scoring 17 unanswered points in the third quarter. But, the fourth quarter was all Redskins. Demarion Bothwell pushed his way into the end zone twice in the final quarter to give Oneonta the lead and the defense did the rest.

Oneonta faces Vigor in the 4A championship game at 11 a.m. Friday, Dec. 3. We will bring you more from Oneonta’s semifinal game in next Wednesdays paper.