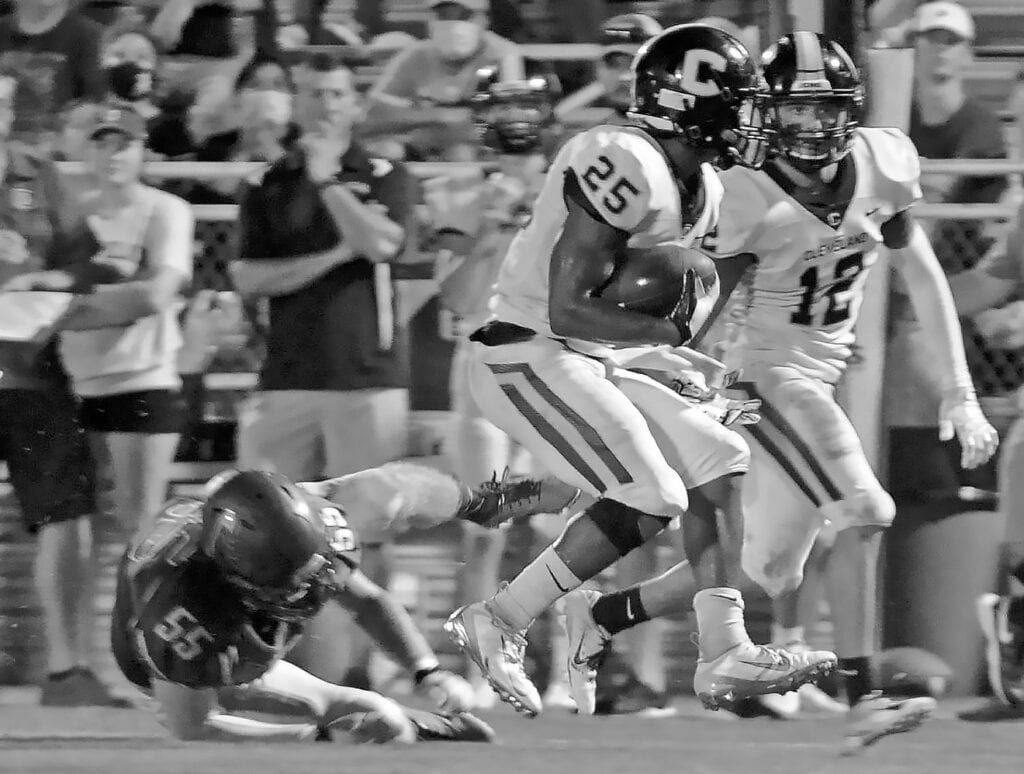 The Cleveland Panthers hit the road last week for a regional matchup with the West End Patriots. The Patriots came out ready to play, scoring on their opening drive. But the Panthers answered quickly, and they never let up. Strong on both sides of the ball, the Panthers racked up 437 yards and six touchdowns and only gave up 235 yards coming away with a big win, 44-14.

It didn’t take the Panthers long to even the score. Logan Washburn hit Pierce Gilliland for 18 yards and the touchdown. On the next Panther drive, the Patriots couldn’t stop Daquarrius Phillips who broke away for a 50-yard score. Washburn’s 2-yard rush on the two-point conversion attempt made it 14-7.

In the second, Phillips scored again. This time he took the ball for 62 yards. Johnathan Hernandez’s kick made it 21-7. On the Patriot’s next drive, Gabriel Weems got to the quarterback in the end zone adding 2 more points on the safety. The Panthers took advantage, scoring again on a 6-yard Phillips’ run. Hernandez’s extra point made it 30-7 heading into halftime.

Less than two minutes into the third period, Washburn hit Gilliland again. The 59-yard touchdown and ensuing Hernandez extra point gave the Panthers a 37-7 advantage. On their next drive, Washburn found Phillips this time for a 26-yard completion for the touchdown. Hernandez added the extra point for a score of 44-13.

The Patriots managed to get one more touchdown as time was winding down, but the Panthers’ defense showed they were a force to be reckoned with. They only gave up 77 yards rushing and 158 passing. They forced and recovered two fumbles, recorded a safety, snagged an interception, and ended the night with 17.5 sacks. Kyle Willis, with seven tackles, had four of those sacks. Karter Adams ended the night with 13 tackles and one sack. Luis Saucedo had 12 tackles with two and a half sacks.

Washburn and the Panther offense continue to impress as well. Washburn ended the night with 246 total yards. He was 8-for-11 for 192 yards and three touchdowns through the air and gained another 54 yards on the ground. Phillips had 199 total yards (154 on the ground) and four scores. Gilliland ended the night with 144 receiving yards and two touchdowns. Jacob Johnson rushed for 22 yards and Tristan Childers rushed for 17.

Cleveland travels to Spring Garden Friday to face the undefeated Panthers in another 2A Region 6 matchup.